The EU’s chief Brexit negotiator is stepping up his attempts to get a free trade agreement over the line by meeting the German Chancellor, who currently holds the EU’s rotating presidency and will play a vital role in convincing her counterparts to support any deal. The influential Mrs Merkel is optimistic a trade deal with the UK can be agreed before the end of the transition period on December 31, and on Friday said London remains on “a constructive path”. But she also warned the “breach” of the Brexit Withdrawal Agreement through the UK Government’s Internal Market Bill is a “bitter” blow in efforts to reach a deal.

The crunch meeting comes after Boris Johnson said he still wants a trade agreement with the EU before the end of the year but insisted Britain could live with a no deal outcome, after he agreed in a phone call with European Commission President Ursula von der Leyen to step up negotiations.

The Prime Minister said on Sunday: “I think it’s there to be done.

“Alas, there are some difficult issues that need to be fixed, and there’s no question that the EU needs to understand that we’re utterly serious about needing to control our own laws and our own regulations, and similarly they need to understand that the repatriation of the UK’s fisheries is very important.”

When asked if he is worried by the potential damage a no-deal outcome could have, Mr Johnson replied: “I don’t want the Australian WTO-type outcome, particularly, but we can more than live with it. 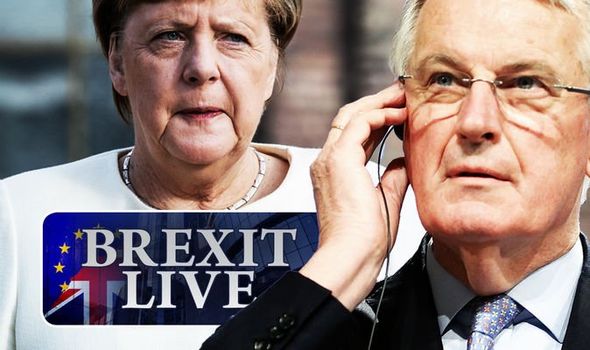 “I think the people of this country have had enough of being told that this will be impossible or intolerable. I think we can prosper mightily under those circumstances.”

The EU wants a trade deal struck with the UK by the end of October to leave enough time for the bloc’s leaders to ratify the agreement before the end of the year.

Further trade talks will take place in London this week and in Brussels the following week, before the 27 EU leaders meet at a special summit on October 15-16 to assess the progress.

The combination of COVID-19 and a no-deal Brexit with the EU could cost the UK around £134 billion each year in lost GDP for a decade, research by law firm Baker & McKenzie showed.

In a report titled “The Future of UK Trade: Merged Realities of Brexit and COVID-19”, Baker & McKenziethe coronavirus outbreak will cut the country’s GDP by 2.2% below the levels anticipated before the crisis began.

The law firm alsio said Brexit, even without a trade deal, would cut GDP by 3.1 percent in the long-run relative to a hypothetical scenario where the UK remained in the EU, while exports of goods would fall by 6.3 percent.

However, without a deal, the cost of Brexit would increase to 3.9% of GDP in the long run.

Baker & McKenzie said: “Despite businesses taking steps to offset the added costs of Brexit by reconfiguring supply chains, the decline in export revenues for UK manufacturers will be substantial.

“With the costs of the UK’s departure from the EU likely to be very high, the government will need to use all the tools at its disposal to help mitigate the economic damage.”