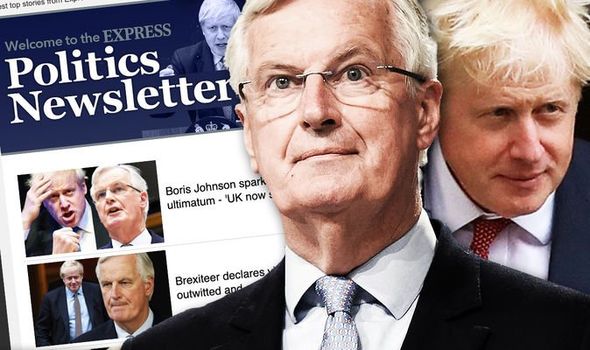 EU negotiator Michel Barnier and his UK counterpart David Frost resumed talks on Tuesday in what was set to be an icy meeting after stark threats from Westminster and Brussels. Boris Johnson raged “I will not back down”, and was said to be considering new laws that Mr Barnier claims would override the Withdrawal Agreement and threaten the border on the island of Ireland.

So incensed was Mr Barnier that the Frenchman threatened to pull out of trade talks altogether.

With the Brexit trade deal on a knife-edge Express.co.uk is giving readers the opportunity to access full analysis and exclusive content on the outcome of this week’s discussions, for free.

Our Brussels Correspondent Joe Barnes will send special edition bulletins giving his take on this week’s events to readers who subscribe to our politics newsletter using the sign-up box above.

With unrivalled access to those in the corridors of power both in London and Brussels, readers can hear exactly what insiders say will be the next moves from the UK and the EU when talks conclude on Thursday.

On Monday one EU diplomat accused the UK of “going full North Korea” claiming Boris was isolating the country from the rest of Europe.

And UK officials were quick to hit back at claims the Government’s Internal Markets Bill undermined the Withdrawal Agreement and puts the Northern Ireland peace process under threat. One told the Daily Express the country faced “potentially extremely damaging defaults” if steps weren’t taken.