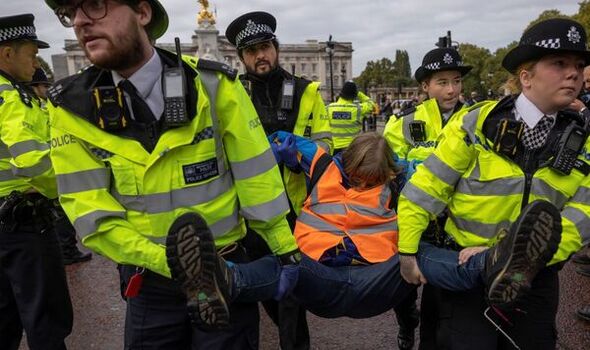 Suella Braverman branded protesters who block emergency services with their sit-ins “indefensible”. And as the Public Order Bill returns to parliament on Tuesday, she has backed tougher penalties.

Yesterday, Animal Rebellion protesters poured milk on to shop floors, across the country. And London was hit by another series of protests which brought traffic to a standstill.

In Shoreditch, 26 people were arrested, with officers having to “debond” those glued to the road. Some of the Just Stop Oil campaigners were dragged off the road by ­passers-by or irate motorists.

Addressing the campaign, Ms Braverman said: “This dangerous disruption is not a freedom of expression, nor a human right. It must stop. The police need strengthened and tougher powers to match the rise in self-defeating protest tactics and that’s what the Public Order Bill will do.”

She will seek new powers for the police to take a more proactive approach and tackle repeat offenders. It will involve new criminal offences for gluing, with a sentence of up to six months in jail and an unlimited fine.

There will also be a new offence of interfering with key infrastructure, carrying a maximum sentence of 12 months and an unlimited fine.

A further amendment to the Bill will allow ministers to get injunctions in the public interest, where protests are causing or threatening serious disruption or a serious adverse impact on public safety.