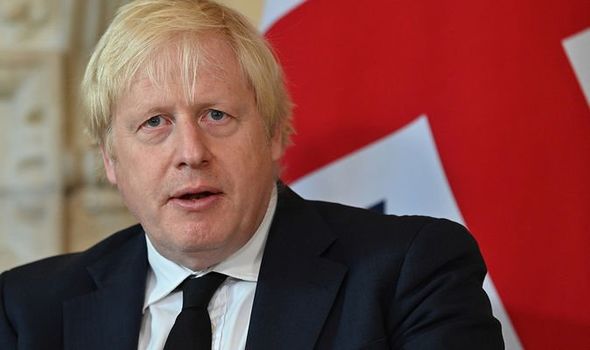 The Prime Minister said the coronavirus pandemic had put the health service under “terrible strain” and more money must be raised to help clear waiting lists.

Ex-Brexit Secretary David Davis became the latest Conservative backbencher to call for the new levy to be scrapped.

The 1.25 percent tax rise comes into force in April, the same month energy costs will rocket and inflation is expected to near seven per cent.

Mr Johnson said: “The NHS has done an amazing job but it has been under terrible strain.

“What I’m telling people is, if you want to fund our fantastic NHS, we have to pay for it – and this Government is determined to do so.”

The Prime Minister refused to say the increase would definitely go ahead in the spring but No 10 later insisted he was committed to the timetable for the rise.

The £36 billion that the Treasury forecasts the extra national insurance contributions will provide has been earmarked to clear the NHS backlog and then to fund social care improvements.

Senior ministers are reportedly keen to delay the rise they previously approved, but No 10 insisted the Cabinet “stands behind that decision.”

Education Secretary Nadhim Zahawi said going ahead with the hike was the “right thing to do”.

“The £36 billion is necessary because successive governments… of every colour have not dealt with this,” he said.

“It is really important to remember that the highest earners, the 14 percent who earn the most are paying 50 percent – they are paying half of that contribution, and the lowest earners, 6.1 million of the lowest earners pay nothing, so it is as progressive as we can make it to deal with a problem that breaks many an individual in their old age.

“So it is really important to just focus on why we are doing this, why I think it is the right thing to do, because it will finally create a system of adult social care that is sustainable and deliverable without breaking families.”

Mr Davis, who last week called for the Prime Minister to quit, said the national insurance rise would take away about 10 percent of disposable income for “ordinary families”.

The former Cabinet minister said the levy probably would not raise “anything like” the £12 billion a year forecast and could even have a negative effect because it slows the growth of the economy.

He said the plans were based on “quite a lot of wrong data”.

“They didn’t know at the time that by April we would have the highest inflation for 30 years,” he said.

“Therefore they didn’t know quite what pressure there would be on ordinary people.”

It comes as a petition calling for an emergency £500 payment for all pensioners has been backed by more than 11,500 people.

Campaigners warned millions of senior citizens will struggle to cope with soaring bills while on their fixed incomes.

The government will be forced to formally respond to the demand made in the petition organised by Silver Voices after it passed the trigger point of more than 10,000 signatures.

Director Dennis Reed insisted that extra help being considered by ministers to help the poorest cope with the steep rise in energy bills will not go far enough.

He warned the 3.1 percent pension increase in April will fall well short of the inflation rate, which is expected to reach nearly seven percent by then.

Mr Reed: “We trust the Government will take note of the main principle behind our petition, namely that any extra cost-of-living support, limited to those on benefits, ignores those millions of older people who survive on their state pension as their main source of income, supplemented by limited savings and perhaps a small private pension.

“The large majority of older people will struggle to pay the astronomical energy increases being contemplated by the power companies.

“We are generally living on fixed incomes which cannot cope with an inflationary spiral.

“The Government has a responsibility to make amends on its premature decision to suspend the triple lock for 2022 and provide emergency support for all pensioners.”

A Government spokesman said: “We want pensioners to receive all the support to which they are entitled. Our winter fuel payments are supporting over 11 million pensioners with their energy bills and we are continuing to encourage those eligible for Pension Credit, and the wide range of other benefits it can provide, to make a claim.

“The one-year move to temporarily suspend the triple lock ensures fairness for both pensioners and taxpayers. Combined with last year’s 2.5 percent increase to pensions – a step we took when earnings fell and inflation barely rose – we have ensured pensioners’ incomes have been protected.”