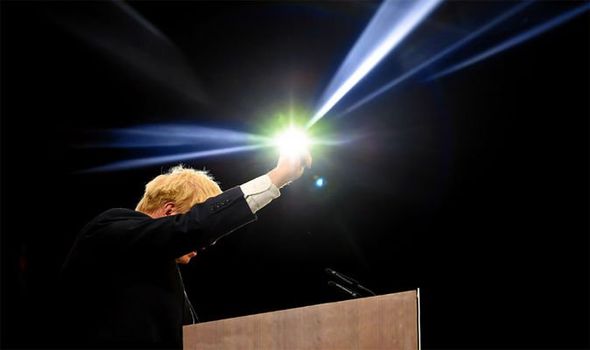 In a barnstorming Tory conference speech citing Margaret Thatcher and Winston Churchill, the Prime Minister set his sights on driving up skills and productivity to build a high-wage, low-tax future with prosperity and jobs spread more equally around UK regions.

He admitted overhauling an economy dogged by inadequate investment and over reliant on cheap labour from overseas will be “difficult” while insisting that it was what the British people had voted for in the 2016 EU referendum and 2019 general election.

“I believe that through history and accident this country has a unique spirit, the spirit of the NHS nurses and the entrepreneurs,” he told the Tory faithful at the Manchester convention centre in their first in-person conference since the pandemic.

The PM said to take on the challenges, the UK needs the will to win shown by England footballers, by the British Olympians and Paralympians plus “the indomitable spirit” of tennis champ Emma Raducanu, mentioning “her grace and her mental resilience when the game was going against her”.

Britain’s spirit was “the same across this country in every town and village and city that can be found in the hearts and minds of kids growing up everywhere and that is the spirit we are going to unleash,” he said.

Mr Johnson took on Tory critics who claim he is abandoning Conservatism and lurching towards Labour-style tax and spending.

Defending his 1.25 percent National Insurance rise to raise extra funds for the NHS and social care, he said: “We aren’t just going to siphon billions of new taxes into crucial services without improving performance.” He vowed the £12billion a year will not wasted on “needless bureaucracy”.

Defending the free market, he said capitalism had driven the successful hunt for a Covid vaccine.

He also vowed to “defend our history and cultural inheritance” against woke activists bent on rewriting Britain’s imperial past.

Britain will become a high-wage, high-skilled and high-productivity nation in Mr Johnson’s vision.

Ending a reliance on cheaper workers from overseas will fix the “broken” economic system that had depressed pay and had held back growth.

The Prime Minister attributed the “stresses and strains” of food and fuel shortages to an economic revival and ruled out a return to uncontrolled immigration to tackle them. Raising pay and boosting output will lead to a low-tax economy, according to Mr Johnson.

The cost of the Covid crisis has hit £407billion while debt is more than £2trillion, and plans to raise National Insurance to tackle the NHS backlog and care reforms caused concern in the party.

Mr Johnson said his predecessor Mrs Thatcher would not have ignored the “meteorite” that had crashed through public finances: “She would have wagged her finger and said: ‘More borrowing now is just higher interest rates, and even higher taxes later’,” he added.

Cutting GP and NHS waiting times is now the “priority of the British people”, Boris Johnson declared. With society reopening after more than a year of virus restrictions, the Prime Minister said the focus must be on cutting the logjam of hospital and doctor appointments.

“Covid pushed out the great bow wave of cases and people did not or could not seek help, and that wave is now coming back,” he told delegates. “Your hip replacement, your mother’s surgery…and this is the priority of the British people.”

Mr Johnson recalled his own battle with coronavirus, and spoke of looking “blearily” out of a window in St Thomas’ Hospital in central London at a hole in the ground between the intensive care unit and an older part of the building: “They seemed to be digging a hole for someone or something…possibly me. But the NHS saved me and our wonderful nurses pulled my chestnuts out of that Tartarian pit.

“I went back on a visit the other day and I saw that the hole had been filled in with three or four gleaming storeys of a new paediatrics unit.

“And there you have a metaphor my friends for how we must build back better now.”

Back to the workplace

The PM signalled he wants to see more staff return to offices, as reducing the numbers who have been working at home since Covid erupted would boost productivity.

Ministers have suggested they want workers back – but stopped short of ordering a return.

Mr Johnson went further and told the conference: “We will and must see people back in the office.” He said for firms to be productive, they need “face-to-face meetings and water cooler gossip” and said it would be difficult for young new starters to “learn on the job” if they were left to work from home.

The Labour leader was savaged as a “human weathervane” in Mr Johnson’s strongest attack yet.

His brutal verdict hit at “Starmer Chameleon’s” failure to squash the hard Left in his party and at his overly cautious response to Covid. He said Sir Keir had blasted Government strategy one week before “rowing in” when it worked.

“If we had listened to Capt Hindsight we would still be in lockdown, we wouldn’t have the fastest growth in the G7.

“If Columbus had listened to Capt Hindsight he would have discovered Tenerife.”

The Prime Minister said that Sir Keir had resembled a “seriously rattled bus conductor, pushed this way and that by a Corbynista mob” at Labour’s own party conference last week.

Mr Johnson slammed bids to rewrite the past as a betrayal of education, similar to a celebrity editing a Wikipedia page.

He said he initially ignored attacks on great British figures by extremists but later realised it “isn’t just a joke. They really do want to re-write our national story.

“We really are at risk of a kind of know-nothing cancel culture, know-nothing iconoclasm and so we Conservatives will defend our history and cultural inheritance.”

Social justice activists have accused wartime PM Sir Winston Churchill, right, of racism over his support for the British Empire and his attitude towards other races.

Mr Johnson, who wrote a biography of Churchill, told delegates not to forget that people worldwide “admire this country” for its history and traditions, and warned: “We attack and deny our history at our peril”.

The PM borrowed Mrs Thatcher’s slogan “there is no alternative” to explain that short-term labour shortages should not mean a return to mass immigration but to a high-skill, high-wage society. Mrs Thatcher would also have approved of tax hikes to repair the damage done by the pandemic, he said.

Boris Johnson vowed to crack down on the “lethal” cross-Channel migrant crisis as he pledged to fight people-trafficking gangs.

He called the UK a “beacon of light” for having welcomed tens of thousands of Hong Kong nationals and Afghan refugees.

But he warned: “There must be a distinction between someone who comes here legally and someone who doesn’t. I have no sympathy whatever with the people traffickers who take thousands of pounds to send children to sea in frail and dangerous craft. We must end this lethal trade, we must break the gangsters’ business model.”

Mr Johnson also said the party would “not rest” until rape conviction rates improved: “Too many lying, bullying, cowardly men are using the law’s delay to get away with violence against women.”

He quipped her reforms will “insulate them snuggly in prison where they belong”.

But Mr Johnson said the Government will rewild swathes of the country, planting millions of trees, and pointed to the rapid rise of otters and beavers in UK rivers.

Brexit has given the country the freedom to “do things differently”.

The Prime Minister said success stories included the Covid vaccine rollout, the Borders Bill, seeing off the European football superleague and the signing of 68 free trade agreements around the world.

He defended the AUKUS security pact with the US and Australia as an example of “something daring and brilliant that would simply not have happened if we’d remained in the EU”.

Boris Johnson has once again showed his dedication to the great cause of cheering us up.

Beneath the spotlight in the Manchester Central convention centre, the gags rattled from his lips at a relentless pace.

It was his big comeback gig, his first in-person address to the Tory faithful since Covid struck. He told the packed hall this was a “traditional Tory cheek-by-jowler”.

His aides have ruthlessly stage-managed this conference to ensure the Prime Minister is the undisputed star.

All week, Cabinet ministers played to small audiences in a compact lecture theatre. Yesterday, the action switched to a much larger exhibition hall for the main event.

Glossy placards with Johnsonian slogans like “Build Back Better” were provided for fans to wave. A film with an ear-splitting heavy metal soundtrack showing the Prime Minister clowning around, sparring in boxing gloves or driving a bulldozer, provided the introduction.

Then, without the traditional warm-up delivered by some rising star MP, he charged on to the stage and launched into the wisecracks.

His Cabinet colleague, and once bitter rival, Michael Gove was ribbed for some recent disco dancing that went viral on social media.

“Let’s hear it for Jon Bon Govi,” chortled the PM, describing his Communities Secretary as “living proof that we, you all, represent the most jiving, hip, happening and generally funkapolitan party in the world”.

Labour came in for rather more cutting mockery. The party’s former leader Jeremy Corbyn was a “corduroyed communist cosmonaut” and his Lefty fan club “a Corbynista mob of Sellotape-spectacled sans-culottes”.

His successor Sir Keir Starmer was lampooned as “the human weathervane, the Starmer chameleon”; he was “flapping with all the conviction of a damp tea towel”.

Accusing the Labour leader of dithering, Mr Johnson said: “If we had listened to Captain Hindsight we would still be
in lockdown.

“If Columbus had listened to Captain Hindsight he’d be famous for having discovered Tenerife.”

Tongue twisters and surreal images rained down on the PM’s audience pell-mell.

Celebrating the UK’s nuclear submarine technology alliance with Australia and the US, known as AUKUS, he noted a “raucus squaukus from the anti-aukus caucus”.

Recalling his own life-or-death battle with Covid at London’s St Thomas’ Hospital, he said: “Our wonderful nurses pulled my chestnuts out of that Tartarean pit.”

At a few points some more thoughtful passages slipped in between the gags.

The brevity was probably more down to his breakneck delivery than a lower word count.

It ended suddenly, with Boris slamming his speaking notes shut before bouncing off the stage to grab his wife Carrie for the obligatory leader and spouse snaps.

And cheery was what the Tory faithful craved.

The UK has been through a grim year-and-a-half with the pandemic. A gloomy winter with a cost-of-living squeeze and consumer shortages almost certainly lies ahead.

Gags aside, the speech was short on genuine substance and almost entirely devoid of new policies.

There will be little to recall once the smiles fade.