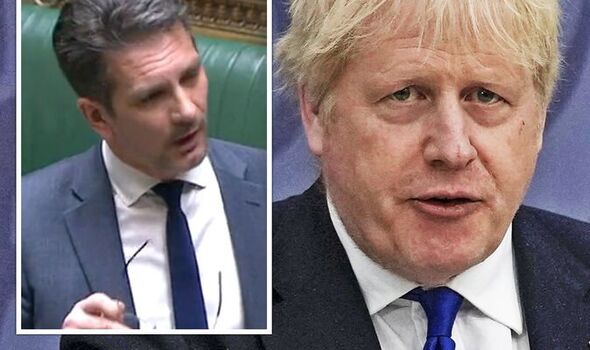 But on Wednesday evening, the government attempted to delay the vote until after the police inquiry in partygate was completed and the report by civil servant Sue Gray had been published – a move which could delay the vote by months. Ahead of the heated debate on the matter this morning, Nadhim Zahawi has voiced his support for the party leader. The Education Secretary told Sky News: “Most of my colleagues who are fair-minded, who believe in due process, will vote for the amendment because it is the right thing to do.” On his way to India as part of a two-day trip, reporters asked Mr Johnson whether there were any circumstances under which he would resign, the Prime Minister replied: “Not a lot springs to mind at the moment.”

Tory MPs risk being accused of a ‘cover up’

Mr Gauke said he sees no problem with voting now on whether there should be an inquiry once the police investigation has concluded.

Speaking on Sky News, he added that Conservative MPs could end up being accused of trying to “cover up” the issue if they vote down Labour’s motion later today.

Good morning from London. I’m Tara Fair, I’ll be bringing you all the latest developments on Boris Johnson. Please feel free to get in touch with me as I work if you have a story or tips to share! Your thoughts are always welcome.