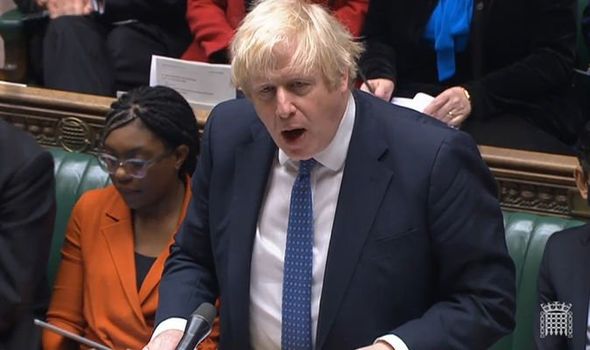 In a spirited Commons fightback, the Prime Minister ignored taunts, focusing instead on his economic record. Ministers also dismissed suggestions Tory rebels were gathering signatures in a bid to trigger a party leadership contest.

Mr Johnson’s defence follows backbench unease at recent policy decisions and his Peppa Pig World ad-lib while addressing the CBI on Monday after losing his notes.

But an ex-minister and ally declared: “Boris Johnson is a fighter and a winner.”

The support came as a poll last night gave Labour a narrow lead but showed no evidence Tory voters were switching to Sir Keir Starmer’s party in significant numbers.

The SNP’s Westminster leader Ian Blackford chipped in: “With his party falling in the polls and his colleagues briefing against him, has he considered calling it a day before he is pushed out the door?

“Why is he clinging on, when it is clear that he is simply not up to the job?”

“There are now more people in work in this country than there were before the pandemic began. That is because of the policies that this Government has followed.”

Senior MPs have rejected claims Tory rebels had written to Sir Graham Brady, who chairs the 1922 Committee of Tory backbenchers, to demand a leadership contest.

One former minister said: “Boris is not going anywhere. He is a fighter and he is a winner. He has charisma with a capital C and retains his extraordinary popularity with voters.

“Some of our more recent MPs are clearly nervous. They need to toughen up and learn that being in Government isn’t always easy. They need to rally round and defend the PM.”

Deputy Prime Minister Dominic Raab did just that, insisting: “The Prime Minister is an ebullient, bouncy, optimistic, Tiggerish character and he livens up his speeches in a way that few politicians past and present have done.

“But actually there is a steeliness to him as a prime minister, and indeed his team, and we work as a team.”

Mr Johnson has endured barbs from Tory ranks after his Peppa Pig speech and botched handling of the Owen Paterson sleaze row. He also suffered a backbench rebellion in a Commons vote on Monday about watered-down plans for a cap on social care.

His aides were enraged when the BBC quoted a Downing Street insider as saying there was “a lot of concern inside the building about the PM”.

Mr Johnson’s press secretary yesterday denied that the jibe came from the Treasury in an attempt to destabilise him.

Meanwhile a monthly poll by Savanta ComRes showed the PM’s popularity fell to its lowest level yet.

His net favourability dropped five points to -14 from minus nine last month.

The figure fell 13 points from +48 to +35 among those who voted Conservative at the last general election. Labour had a two-point lead over the Tories, with Sir Keir’s party backed by 38 percent of voters quizzed.

But Mr Johnson was still considerably ahead on the “Best PM” measurement, backed by 39 percent to the Labour leader’s 31 percent.

Despite Labour’s poll lead, Chris Hopkins of Savanta ComRes said: “Conservative voters are not abandoning the party for Labour, nor are Red Wall voters appearing to return to Starmer’s party.

“Waiting for the Tories to screw things up has felt like Labour’s strategy for almost 18 months. There’s nothing to suggest that they’re ready or trusted to take advantage.”