Welcome to our weekly analysis of the state of the 2020 campaign.

The week in numbers

The Biden campaign reported $466 million cash on hand entering September together with the Democratic Party, compared with $325 million for the Trump campaign and the Republicans. That is a stark reversal from the spring, when the president had a large cash advantage.

A New York Times/Siena College poll this week found Joe Biden closing the gap on President Trump in three states that voted decisively for Mr. Trump in 2016: Iowa, Georgia and Texas. Mr. Biden was up by three percentage points among likely voters in Iowa, tied with Mr. Trump in Georgia and down by three in Texas. (All of those spreads were within the margin of error.)

The results in all three states reflected Mr. Biden’s lopsided advantage among women, who chose him over Mr. Trump by anywhere from eight to 13 points.

Two events now have the potential to shift a steady race: President Trump’s expected nomination of Judge Amy Coney Barrett to replace Justice Ruth Bader Ginsburg on the Supreme Court, and the first general election debate on Tuesday night. Mr. Trump may well get to place a third justice on the nation’s highest court, cementing his legacy for a generation. But the politics of doing so don’t necessarily help him in the near-term.

The loss of a feminist icon and her seat could be a motivating force for Democratic voters, much as the death of Justice Antonin Scalia in 2016 was for Republicans. The upcoming confirmation battle will also put abortion and the Affordable Care Act back in the spotlight, which risks alienating older Americans and moderate suburban voters the president has been trying to woo, while energizing younger, progressive Democrats who had more enthusiasm for Justice Ginsburg than they do for the Democratic nominee, Joseph R. Biden Jr.

It’s not clear that the replacement pick will be as big a factor for Republicans who have already hitched their wagons to Mr. Trump. So far, the death of Justice Ginsburg didn’t appear to have affected the presidential race in Texas, Iowa and Georgia. One upside for Mr. Trump: The Senate confirmation battle will give him a story line to compete with his least favorite subject, his handling of the coronavirus pandemic.

The debate, meanwhile, is a stage where the president, trailing steadily for months by seven to eight points in public polls, has the best shot at shaking up the dynamic of the race. It’s a high-stakes moment for Mr. Biden, too, a candidate who is barely seen on the campaign trail. But Mr. Trump has aided him by lowering expectations of his performance. 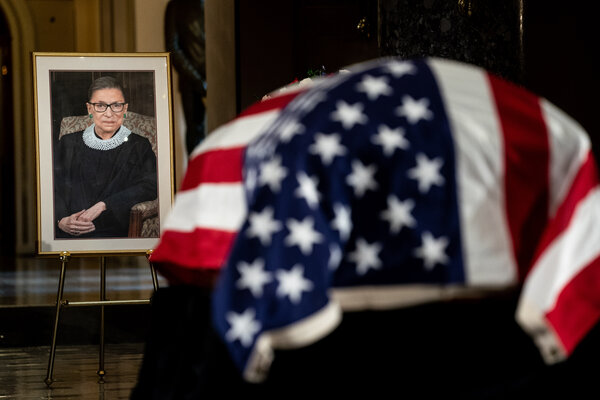 “I will be announcing my Supreme Court Nominee on Saturday, at the White House!” Mr. Trump tweeted earlier this week, with his reality TV showman’s appetite for a big reveal.

Except this time around, there has been little doubt to a process in which he didn’t interview any other candidates. The president’s expected nomination of Judge Barrett leaked 24 hours before his official announcement.

Mr. Trump interviewed Judge Barrett when he ultimately chose Justice Brett Kavanaugh to replace Justice Anthony Kennedy in 2018. At the time, he told aides he wanted to save Judge Barrett, a former law professor the president named to a federal appeals court, as his female replacement for Justice Ginsburg. As much as Mr. Trump has tried to keep some mystery surrounding his process, there has been very little, and everyone involved has been preparing for one name only.

The push for a Florida judge never got off the ground: Some of Mr. Trump’s campaign aides and advisers in the most critical of battleground states, Florida, were pushing him to consider Barbara Lagoa, a Cuban-American judge on the United States Court of Appeals for the 11th Circuit. But even her boosters admitted Mr. Trump’s mind was made up and there was close to zero chance he would choose someone he had never even met on the rushed timetable he was working under — even if her selection promised to help him in a must-win state. White House officials, meanwhile, have been pushing for Judge Barrett all along.

Judge Barrett is already making moves: Capitol Hill staff members were already planning for the arrival of her longtime friend Nicole Stelle Garnett, a professor at Notre Dame Law School, who they expect will be her top adviser through the confirmation process, early in the week.

The campaign was still trying to fund-raise off a reality-show style reveal: “This is your opportunity to be the FIRST to know who President Trump nominates to be the next Supreme Court Justice of the United States,” a campaign email on Friday said, contending that Mr. Trump has been working “around the clock to find the most qualified, conservative constitutionalist to fill the vacant seat.” In fact, he didn’t interview anyone else.

Does the first debate mean more for Biden?

This week, members of Mr. Trump’s campaign and some media observers tried to draw attention to Mr. Biden’s light public schedule, considering the former vice president has been in debate prep and is not doing many public events. But the week of preparation belies an underlying truth: There may be more at stake in Tuesday’s debate for the Democratic challenger than the president. Republicans have spent months denigrating Mr. Biden’s mental fitness, an attack that has managed to lower expectations in some public appearances.

He comes in with a lead: The consistency and breadth of polling have so far made clear that Mr. Biden enters the first debate with an edge. While incumbent presidents often have advantages in re-election races, Mr. Biden’s favorable polling alters the power dynamics of the contest. It’s Mr. Biden who will be seeking to maintain his lead, reassuring voters who trust him over the current president that their instincts are correct. If he fails to satisfy them, it could be Mr. Biden who receives rough reviews on Tuesday night.

Mr. Trump is a known quantity: The 2020 election has been framed as a referendum on Mr. Trump, and Mr. Biden’s campaign has leaned into that. However, after four years with Mr. Trump occupying the political spotlight, many voters have a firm view of his temperament and stage conduct. In the debate, it’s Mr. Biden who has to reaffirm his image as a steady hand.

The ghost of 2012: Mr. Biden knows firsthand the impact of a poor first debate. In 2012, President Barack Obama was caught off guard by his challenger, Mitt Romney, briefly throwing the Obama-tilting race into sudden uncertainty. For his part, Mr. Biden delivered strong performances for Mr. Obama in vice-presidential debates in 2008 and 2012, but he will come into Tuesday’s event with a lesson from his presidential sherpa: Don’t take anything for granted.

For months, Mr. Trump and Republicans have been trying to convince Americans that Joe Biden is something other than Joe Biden. He is, in their telling, a vessel for a more radical set of progressives seeking to upend the country. And they’ve made him out to be a doddering elder who is unable to handle the rigors of the campaign trail and the presidency.

So far, Mr. Biden has shrugged off the attacks. But in this debate, Mr. Trump’s task will be to corner his opponent on those topics, convincing persuadable and swing voters that the campaign’s alarms about Mr. Biden have been justified. Here are three ways the president might try:

Attack Mr. Biden’s Senate record: The crime bills of the 1980s and 1990s, along with issues like free trade, international relations and Supreme Court confirmations including Mr. Biden’s handling of the allegations made by Anita Hill, are all areas in which Mr. Biden has been pressed by the news media and by opponents since announcing his presidential run. Mr. Biden also has a personal investment in defending his record, and has rarely admitted any wrongdoing even as his allies say that he has evolved. On the debate stage, Mr. Trump can seek to exploit this disconnect — Mr. Biden the candidate who strains to admit error and a Senate record that is out of step with many of the country’s biggest issues.

Consider nothing off limits: The former vice president should be prepared for Mr. Trump to bring up anything and everything, including some of the topics Mr. Biden has rarely spoken about in person. This could include the sexual assault allegation against Mr. Biden by a former Senate aide, or personal details about Mr. Biden’s family. The conservative media outlets that often reflect Mr. Trump’s thinking have put a particular spotlight on Hunter Biden, Mr. Biden’s son who once served on several international boards.

Escalate the ad hominems: Unlike in his 2016 run, when Mr. Trump took pride in branding his opponents, he has not settled on a consistent nickname — or attack — against Mr. Biden. Last week he took an audible poll at his rally in Wisconsin, asking attendees to shout if they preferred “Sleepy Joe” or “Slow Joe.” This will not stop him from trying. Mr. Trump has tried to run a campaign on Mr. Biden’s character, while his opponent has tried to stay laser focused on issues such as the coronavirus pandemic. Those approaches will clash come Tuesday.

Only 17 percent of absentee ballot requests have been from Republicans. The low percentage could be related to several things, however Mr. Trump’s false claims about election fraud may be undercutting his party’s own longstanding efforts on absentee voting in swing states.

This week in voting: Wisconsin and Pennsylvania are in legal battles over ballot deadlines; there are lawsuits pending in Pennsylvania and Ohio about drop boxes; and in Michigan there are disputes on whether voters can fix their absentee ballots.

More than 38 million eligible voters have disabilities — that’s more than 16 percent of the electorate — and even though voting is more accessible because of the pandemic, a large number of disabled voters will still be unable to vote.

A crucial stretch of the race is about to start as President Trump’s Supreme Court pick and his first debate with Joe Biden loom. Read the latest.