The decision, expected Wednesday, will cap months of deliberations over fairness and the potential to exacerbate an inflation rate that has reached a 40-year high. 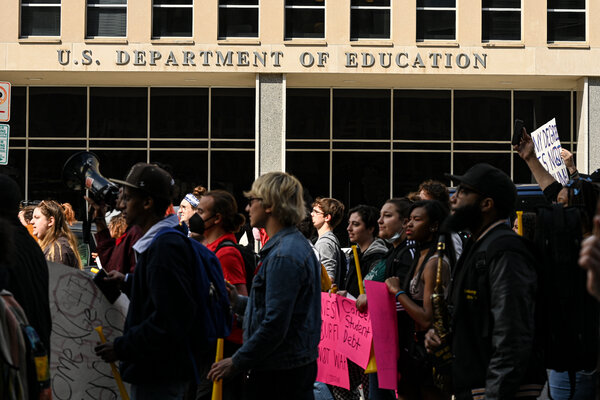 WASHINGTON — President Biden will announce a decision on Wednesday about his plans for student loan debt relief, a highly anticipated moment that could affect about 45 million borrowers nationwide, according to people familiar with the matter.

Although details of the plan were still being finalized, White House aides have said Mr. Biden was weighing a targeted plan that would provide $10,000 of debt relief for borrowers who make below a certain level of income.

Mr. Biden also is expected to extend a pause on loan payments for all borrowers, a Trump-era program that has been in effect since the start of the pandemic.

Mr. Biden has faced calls to cancel student debt throughout his presidency, driven by borrowers and the progressive wing of his Democratic Party. He backed the idea on the campaign trail in 2020, saying: “I’m going to make sure that everybody in this generation gets $10,000 knocked off of their student debt as we try to get out of this godawful pandemic.”

But White House aides say the president has agonized over the decision, questioning whether cancellation should apply to students of both public and private universities and saying he does not want the relief to apply to those earning high incomes.

The decision will add fuel to debates raging in Washington — and within the Democratic Party — about economic fairness and the potential to exacerbate an inflation rate that has reached a 40-year high.

Mr. Biden had promised a decision by the end of the month, but he is expected to return to the White House on Wednesday from Delaware, where he is on vacation with his family.

“The president will have more to say on this before Aug. 31,” said Abdullah Hasan, a White House spokesman. “No one with a federally held loan has had to pay a single dime in student loans since President Biden took office.”

Mr. Hasan also noted that the Biden administration has “already canceled about $32 billion in debt for more than 1.6 million Americans,” a reference to actions to revive and expand targeted relief programs that had all but stopped functioning during the Trump administration.

The Biden administration has wiped out debts for eligible public service workers, permanently disabled borrowers, defrauded students and people whose schools abruptly closed while they were enrolled.