The president’s $2 trillion proposal allocates money to help communities of color, like a New Orleans neighborhood devastated by a highway project a half-century ago. 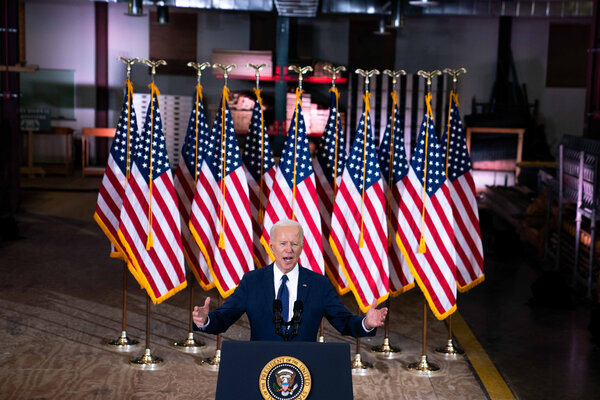 By Jim Tankersley and Zolan Kanno-Youngs

WASHINGTON — America’s most celebrated infrastructure initiative, the interstate highway system, rammed an elevated freeway through the center of Claiborne Avenue in New Orleans in the late 1960s.

It claimed dozens of Black-owned businesses, along with oak trees and azalea bushes that had shaded Black children playing in the large neutral ground in the middle of the street, eviscerating a vibrant neighborhood whose residents fought in vain to stop the construction.

More than a half-century later, President Biden’s $2 trillion plan to rebuild aging roads, bridges, rail lines and other foundations of the economy comes with a new twist: hundreds of billions of dollars that administration officials say will help reverse long-running racial disparities in how the government builds, repairs and locates a wide range of physical infrastructure.

That includes $20 billion to “reconnect” communities of color to economic opportunity, like the Black residents still living in the interstate’s shadow along Claiborne.

Mr. Biden’s plan, which he unveiled on Wednesday in Pittsburgh, is the first step in a two-part agenda to remake the American economy. The president and his advisers have pitched that agenda — whose total cost could reach $4 trillion — in the grand terms of economic competitiveness and the granular language of shortened commute times.

But they have also stressed its potential to advance racial equity and bridge gaps in economic outcomes.

In addition to dedicated funding for neighborhoods split or splintered by past infrastructure projects, the proposal also includes money for the replacement of lead water pipes that have harmed Black children in cities like Flint, Mich.; the cleanup of environmental hazards that have plagued Hispanic neighborhoods and tribal communities; worker training that would target underserved groups; and funds for home health aides, who are largely women of color.

More traditional efforts to close racial opportunity gaps, like universal pre-K and more affordable higher education, are coming in the next phase of Mr. Biden’s plans. The exact mix of components is likely to change as Mr. Biden tries to push the plans through Congress.

Given the thin Democratic majorities in both the House and the Senate, the legislative battle is likely to be intense and highly partisan, with no assurance the White House will prevail.

Republicans have objected to the corporate tax increases Mr. Biden has proposed to fund this phase of his agenda, and they have accused the president of using the popular banner of “infrastructure” to sell what they call unrelated liberal priorities — including many of the programs White House officials say will advance economic opportunity for disadvantaged people and areas.