The president said those refusing to get a coronavirus shot should expect inconveniences as long as they decline a vaccine. 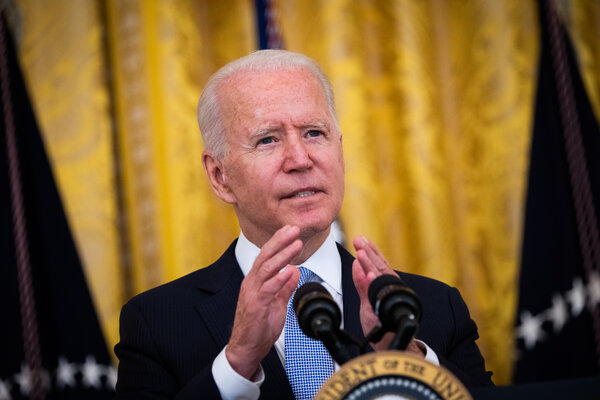 WASHINGTON — President Biden on Thursday sought to revive the nation’s stalled push to vaccinate Americans against the surging Delta variant of the coronavirus, announcing new requirements for federal workers to be vaccinated and urging local and state governments to offer $100 to anyone willing to get a shot voluntarily.

He also ordered the Defense Department to move rapidly toward requiring coronavirus vaccines for all members of the military, a step that would affect almost 1.5 million troops, many of whom have resisted taking a shot that is highly effective against a disease that has claimed the lives of more than 600,000 Americans.

The announcement marked the first time he has suggested that a mandate could come for active-duty members of the military before any of the three federally authorized vaccines receives full approval from the Food and Drug Administration.

In a speech from the East Room of the White House, Mr. Biden effectively conceded that the worst-in-a-century viral scourge he once thought was under control had come roaring back, threatening public health and the economic recovery that is central to the promise of his presidency.

But after months of trying to persuade and cajole, the president on Thursday cast the crisis as one that pits the vaccinated against the unvaccinated, and said those refusing to get a coronavirus shot should expect inconveniences as long as they decline a vaccine that protects them and others from illness and death.

Mr. Biden said that federal workers who remained unvaccinated would have to submit to testing as often as twice a week, be restricted from traveling, and be required to wear masks and remain socially distant — essentially creating a two-tier system for the government’s more than two million civilian employees and hundreds of thousands of private contractors who work at federal facilities around the world.

The move stopped short of a vaccine mandate for federal workers. But the president said he hoped that by imposing new requirements on daily work life, more unvaccinated federal employees will choose to get a shot.

Mr. Biden said he was ordering agencies to find ways to ensure that all federal contractors — even those working for private businesses out of their own offices — could be required to be vaccinated as a condition of their work with the federal government. That could extend the president’s plan to millions more workers, including those in places where vaccination rates are stubbornly low.

“If you want to do business with the federal government, get your workers vaccinated,” the president said bluntly.