The Democratic presidential nominee said he would appoint a bipartisan commission to examine whether an overhaul is needed to the judiciary and to make recommendations. 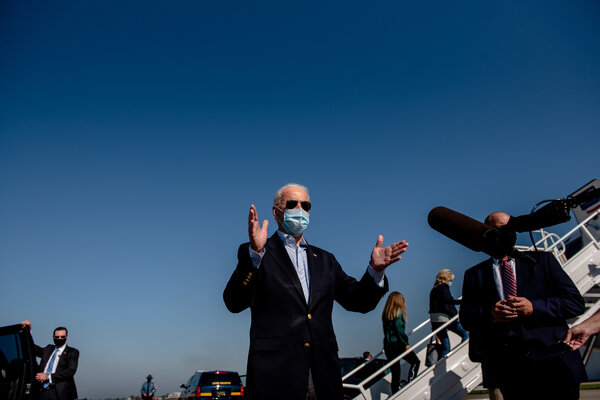 By Charlie Savage and Katie Glueck

Joseph R. Biden Jr., who for weeks has declined to clarify his position on progressive activists’ calls to expand the Supreme Court to add liberal justices, said in a new interview that if elected, he would establish a bipartisan commission of scholars to study possible ways to overhaul the judicial branch.

“I will ask them to, over 180 days, come back to me with recommendations as to how to reform the court system, because it’s getting out of whack,” Mr. Biden, the Democratic presidential nominee, told CBS News’s Norah O’Donnell, according to an interview excerpt made public on Thursday and expected to be broadcast in full on Sunday on “60 Minutes.”

While Mr. Biden opposed court packing during the primaries, he has equivocated since the matter took on new urgency after Justice Ruth Bader Ginsburg died last month and Republicans rushed to fill her seat amid the election endgame — an approach that has allowed the issue to fester and created fodder for a new and sustained line of attack from the right.

Under such pressure, Mr. Biden had said last week that voters “have a right to know where I stand” before they vote.

His proposal for a commission, however, continued to sidestep, for now, taking a yes-or-no position on diluting the power of the new conservative bloc that President Trump and Senate Republicans are creating. And in the brief clip released by CBS, Mr. Biden emphasized that many other ideas were out there for overhauling the judiciary.

“The way in which it’s being handled, and it’s not about court packing, there’s a number of other things that our constitutional scholars have debated and I’ve looked to see what recommendations that commission might make,” he said.

His team offered few specifics about who would serve on the panel or how the campaign had settled on the idea, when asked for details at a news briefing on Thursday.