Before sketching out a plan to keep more jobs in the United States, the former vice president denounced his rival over revelations in a new book that the president knowingly minimized the coronavirus’s dangers. 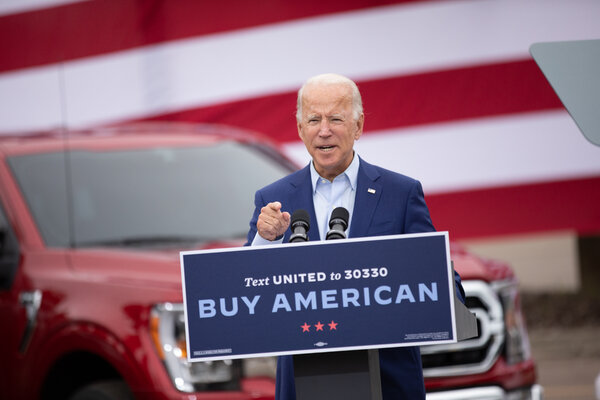 By Thomas Kaplan and Katie Glueck

WARREN, Mich. — Joseph R. Biden Jr., taking on President Trump over protecting American jobs, announced plans on Wednesday to change the tax code to discourage moving jobs overseas and to reward companies for investing in domestic production during a trip to the critical battleground state of Michigan.

But before sketching out his plan, he took aim at Mr. Trump over new revelations from a forthcoming book by the journalist Bob Woodward that the president knowingly minimized the risks of the coronavirus to the American public.

“He had the information,” Mr. Biden said, accusing Mr. Trump of lying to the public. “He knew how dangerous it was. And while this deadly disease ripped through our nation, he failed to do his job on purpose. It was a life-and-death betrayal of the American people.”

Mr. Biden went on to rip into the president’s record on the economy, suggesting that Mr. Trump had not kept his promises to American workers about a range of issues, lashing his record on issues from offshoring to job creation to keeping work in the United States rather than overseas.

“He’s failed our economy and our country,” he said.

Mr. Biden also promised to take a series of executive actions to ensure the purchase of American goods in the federal procurement process.

As part of the new plans, Mr. Biden would create a tax penalty aimed at American companies that move jobs to other countries, known as offshoring. Mr. Biden has already proposed raising the corporate tax rate to 28 percent, from 21 percent. The penalty would apply to “profits of any production by a United States company overseas for sales back to the United States,” bumping up the tax rate to nearly 31 percent on those profits.

Mr. Biden would also create a tax credit for companies that make domestic investments, such as revitalizing closed manufacturing plants, upgrading facilities or bringing back production from overseas.

“Make it in Michigan, make it in America, invest in our communities and the workers in places like Warren,” Mr. Biden said. “That’s what this is about.”

Mr. Biden gave his speech in Warren, a city in Macomb County — a place associated with white working-class voters who traditionally voted Democratic but embraced Ronald Reagan and, later, Mr. Trump. He has intensified his efforts in recent months to unveil more populist policies aimed at boosting American workers.

“I don’t accept the defeatist view that the forces of automation and globalization mean we can’t keep good-paying union jobs here in America, and create more of them,” said Mr. Biden, speaking at U.A.W. Region 1 headquarters, where he made direct appeals to autoworkers. “I don’t buy for one second that the vitality of American manufacturing is a thing of the past.”