WASHINGTON — President Biden’s coronavirus czar said Wednesday that the United States was woefully behind other nations in tracking potentially dangerous variants of the virus, and used the first White House public health briefing to issue a stark warning that Americans will remain vulnerable to the deadly pandemic unless Congress acts.

“We are 43rd in the world in genomic sequencing — totally unacceptable,” said Mr. Biden’s Covid-19 response coordinator, Jeffrey D. Zients, citing December data from the GISAID Initiative, which provides a global database of coronavirus genomes. In a brief interview later, he corrected himself, saying he had since learned that the United States was now behind 31 other nations.

Mr. Biden has repeatedly promised that his administration will conduct regular briefings and be transparent about its efforts to fight the virus, and Wednesday’s virtual meeting was an effort to make good on the president’s pledge. But it was troubled by technical difficulties, with the audio cutting out intermittently.

During the hourlong session, which drew 500 participants, Mr. Zients also warned that the federal government still faced shortages of personal protective gear and other essential supplies that it would not be able to buy if Congress did not pass Mr. Biden’s coronavirus relief plan. His pleas for more money were echoed by Dr. Rochelle Walensky, the new director of the Centers for Disease Control and Prevention.

The White House has dispatched Mr. Zients and other top officials to meet with lawmakers on Capitol Hill as they try to wrangle support for a sweeping $1.9 trillion package that would provide billions of dollars for vaccine distribution, schools, unemployment benefits and another round of direct payments. Top Democrats have said they hope to approve another package with bipartisan support.

But with several senators already balking at the scope and size of the package, Democrats are leaving open the possibility of using a legislative process, known as budget reconciliation, that would allow the legislation to become law with a simple majority rather than by the usual 60-vote threshold.

Scientists have warned that, with no robust system to identify genetic variations of the coronavirus, the United States is ill equipped to track dangerous new mutants, leaving health officials blind as they try to combat the grave threat.

Dr. Anthony S. Fauci, the nation’s top infectious disease expert and Mr. Biden’s chief medical adviser for the pandemic, said the National Institutes of Health was working with the C.D.C. on research aimed at adapting vaccines so that they “have on the ability to neutralize these mutants.” One coronavirus variant, which has surged in Britain and burdened its hospitals with cases, has been increasingly detected in the United States.

Federal health officials have warned that this variant, which is more contagious, could become the dominant source of infection in the United States by March, and would most likely lead to a wrenching surge in cases and deaths that would further overwhelm hospitals. Other variants spreading in South Africa and Brazil have also caused concern.

“I look at the data from the U.K. and how quickly it got really bad in terms of its contagiousness, and how much it could cause a spike, and I am really worried about that,” said Dr. Ashish K. Jha, the dean of the Brown University School of Public Health, in an interview on Tuesday. “It’s also widespread across the U.S. — 20 some odd states have already identified it. That is the big one that I worry about.”

On Monday, the drug makers Moderna and Pfizer-BioNTech reported that their vaccines were effective against variants discovered in Britain and South Africa. But they are slightly less protective against the variant in South Africa, which may be more adept at dodging antibodies in the bloodstream. 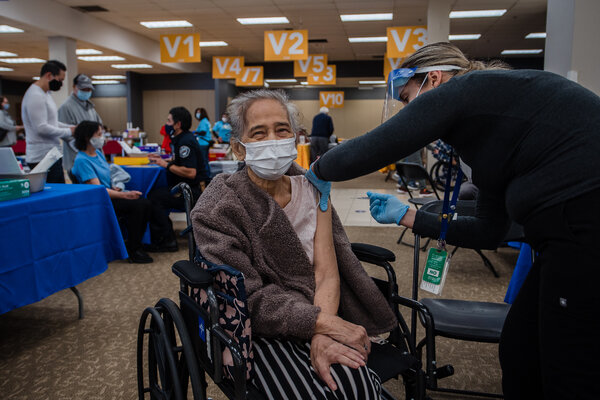 On Wednesday, Mr. Zients said that the Department of Health and Human Services would use the Public Readiness and Emergency Preparedness Act, a law passed in 2005 that gives the health secretary emergency powers, to allow retired doctors and nurses to administer vaccines and give doctors and nurses the right to vaccinate people across state lines.

And Mr. Zients said the president’s commitment to getting “100 million shots in the arms of the American people” did not depend on Congress passing legislation. But he ticked off a list of other priorities that he said required Congress to act.

“In order to get all Americans vaccinated, we need Congress to provide funds for vaccination,” Mr. Zients said, adding, “We need Congress to fund more testing in order to reopen schools and businesses and take care of people in congregate settings. Furthermore, believe it or not, we still have shortages of P.P.E. and other critical materials. We need emergency funds in order to make sure that we have those materials.”

As the vaccine rollout accelerates, the number of daily new cases in the United States, which has the worst outbreak in the world, has been on the decline in recent weeks. American deaths, though, remain high, numbering more than 3,000 per day on average in recent days.