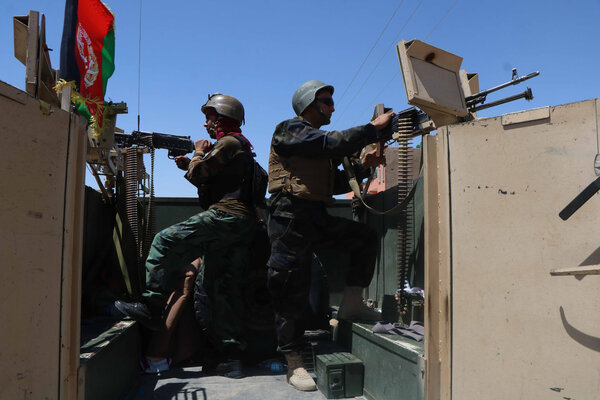 WASHINGTON — As Taliban fighters make startlingly swift advances across Afghanistan, Biden administration officials continue to pin their hopes on a peace deal that would halt the country’s relentless violence with a power-sharing agreement.

They have stressed, at least in their public statements, that the peace process could succeed, even as the U.S. military withdraws from the country and as critics say the talks should be declared a charade and scrapped.

But now even the most encouraging U.S. officials increasingly concede in public what they have previously said in private: that prospects of a negotiated outcome, which could partially salvage the 20-year American project in Afghanistan, appear to be fading fast.

President Biden’s special envoy for Afghanistan, Zalmay Khalilzad, offered a downbeat assessment of what he called the “difficult situation” in the country and the wide gaps between Taliban and Afghan government negotiators.

“They are far apart,” Mr. Khalilzad said during an appearance at the annual Aspen Security Forum on Tuesday. Privately, U.S. officials are even more pessimistic.

It was the latest public expression of support by the Biden administration for talks known as an “intra-Afghan dialogue,” which began last September as part of a deal between the Trump administration and the Taliban that paved the way for the withdrawal of American forces. Meetings between Taliban leaders and Afghan government officials continue on a sporadic basis in Doha, Qatar, including a session in mid-July.

The prospect of a peace deal gives Biden officials something hopeful to point to amid charges that, by withdrawing troops from the country, they have abandoned America’s Afghan allies to Taliban conquest and severe theocratic rule.

But Biden officials have struggled in recent weeks to deflect fears that the group has cynically exploited the peace talks to buy time and provide political cover for a U.S. exit.

“The Taliban must stop this ongoing violence; they must stop it,” Ned Price, the State Department spokesman, told reporters on Wednesday. He said the Taliban have an inherent interest in avoiding the endless civil war that is likely to persist in the absence of a power-sharing deal.