The Arizona Free and Fair Elections Act would have established same-day voter registration and prohibited the state Legislature from overturning federal election results.

This article is part of our Midterms 2022 Daily Briefing 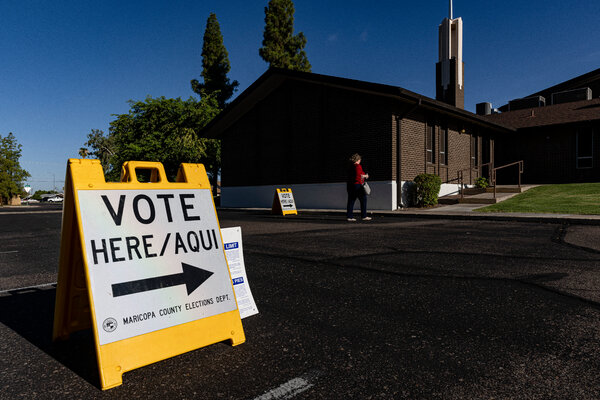 Arizona’s ballot in November will exclude a sweeping election reform proposition after the state Supreme Court upheld a decision to throw out the majority of the nearly half-million petition signatures collected.

The measure would have checked the power of the state Legislature to overturn the results of a federal election, as Republican allies of former President Donald J. Trump attempted to do after he lost to Joseph R. Biden Jr. in 2020 in the battleground state.

In a two-page order signed on Friday by Chief Justice Robert M. Brutinel, the Arizona Supreme Court affirmed a lower court judge’s earlier decision to reject more than 238,000 signatures from the petition to place the measure on the ballot.

To qualify for ballot access, the signatures of 237,645 Arizona voters were needed to support the measure — and more than 475,000 signatures were collected by a coalition of groups aligned with Democrats. But an onslaught of challenges followed from conservatives, including those with ties to Mr. Trump, with the petition drive falling short by 1,458 signatures and supporters of the measure decrying the ruling.

“What we’re seeing here is the result of 20 years of Republican efforts to chip away at democracy in Arizona,” Stacy Pearson, a spokeswoman for the coalition supporting the ballot measure, said in an interview on Tuesday.

The Arizona Free Enterprise Club, a conservative group that challenged the signatures and whether petition circulators enlisted as part of the effort had complied with the state’s rules, called the measure a “radical” election initiative.

Kory Langhofer, a lawyer for the group, said in an email on Tuesday that the invalidated signatures included 20,000 duplicates.

“These cases are extraordinarily difficult for the courts and litigants alike,” Mr. Langhofer said. “They involve hundreds of thousands of signatures and must be resolved in a few weeks, before ballots print. Given those hurdles, only sophisticated clients can bring or defend cases like this.”

The measure’s opponents included a Republican-backed election law group called Restoring Integrity and Trust in Elections, which is led by Derek Lyons, a former White House counsel for Mr. Trump.

The group, whose board members include William P. Barr, an attorney general under Mr. Trump, described the election reform package as a “liberal wish list of election integrity-destroying measures.”

Democrats who backed the initiative accused the Arizona Supreme Court of defying the wishes of voters and noted that five of its seven members were appointed by Gov. Doug Ducey, a Republican who opposed the measure and earlier expanded the court.

“This shows that the court is above the will of the people, and it’s heartbreaking,” Ms. Pearson said. “And unfortunately, it reflects what we’ve seen on a national level, too.”

Mr. Ducey’s office did not immediately respond on Tuesday to a request for comment. A judicial spokesman declined to comment on “subjective perspectives.”