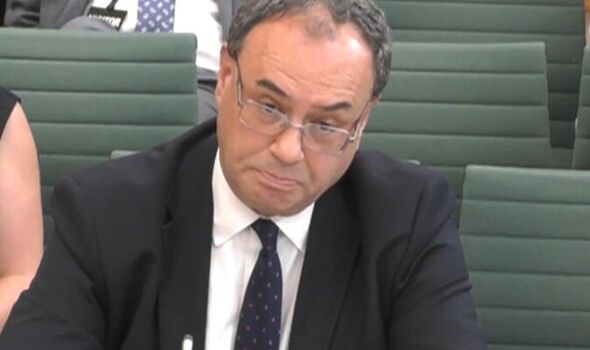 The banker told MPs on the House of Commons Treasury committee the war in Ukraine was a factor that would likely see a sharp rise in prices being paid by consumers in Britain and around the rest of the world.

“Ukraine and Russia is the big risk in a way,” he said.

“One is the risk of a further energy price shock, which would come from the cutting off of gas and distillates, such as products like diesel.

“And then, the one which I might sound rather apocalyptic about, is food.”

Ukraine is one of the world’s biggest suppliers of crops such as wheat and maize, as well as cooking oil.

Mr Bailey warned that while the war-torn country was still managing to produce goods in the face of Russia’s invasion, there was a struggle to ship supplies out of the country.

Citing a conversation he had with Ukraine’s foreign minister, he said: “While he was optimistic about crop planting, as a major supplier of wheat and cooking oil, he said we have no way of shipping it out and that is getting worse.

Inflation is already predicted to reach 10 percent by the end of this year.

It would be the highest level of inflation since 1982.

The Bank of England warned of the skyrocketing prices earlier this month when it raised interest rates from 0.75 percent to one percent in a bid to curb the surges.

Tory MPs have been critical of the Bank for letting inflation spiral out of control, accusing it of failing to intervene earlier to stop price increases.

But addressing MPs today, Mr Bailey said he did not believe the Bank could have acted any differently from the way it did.

“There have been a series of supply shocks and most recently with the impact of the war, Russia’s invasion of Ukraine,” he said.

“We can’t predict things like wars – that’s not in anybody’s power.

“I don’t think we could have done anything differently; we could not have seen a war with Ukraine.

“There is also a further leg of Covid, with the situation in China, which appears to be affecting the country more seriously.”