If the US presidential election were held tomorrow, Trump would most likely lose. But it’s not being held tomorrow. 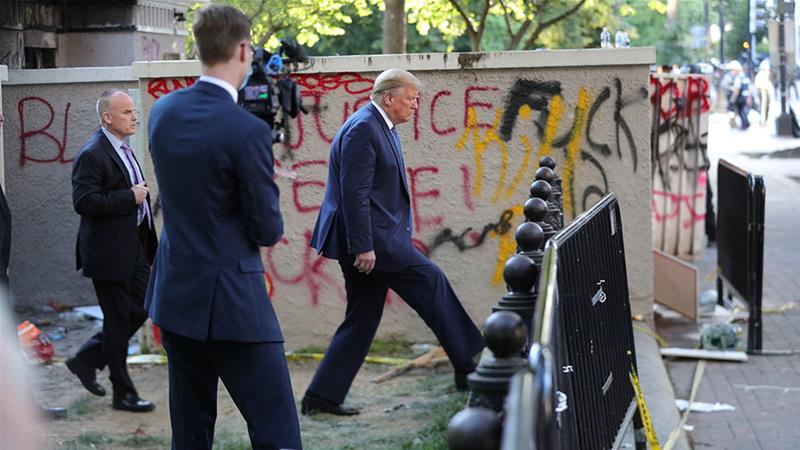 United States President Donald Trump is having a terrible, horrible, no good, very bad week – at least in the world of public opinion polling.

There now has been a full slate of polling since the May 25 murder of George Floyd in Minneapolis and the ensuing protests, and the picture those polls paint for the president is not a pretty one.

Trump’s approval rating has plummeted – Gallup now has his support down a staggering 10 points to 39 percent over the last month – and Democratic challenger Joe Biden leads him by an average of 10 points among registered voters nationally, as well in most of the key battleground states.

Trump’s words, tweets and actions during the coronavirus pandemic and its economic fallout – and now the unrest over the killing of Floyd by a white police officer – cost him among almost all demographics. His support among older voters and white working-class voters is eroding. Younger voters are warming to Biden, and Trump is considered positively toxic among female voters. He now trails Biden among female voters by 25 points.

The polling data has so peeved the president that his campaign took the almost comical step of sending a cease-and-desist letter to CNN, demanding that it retract and apologise for a poll it published over the weekend showing the president trailing Biden by 14 points among registered voters nationwide. The poll, the campaign claimed, was “designed to mislead American voters through a biased questionnaire and skewed sampling”.

A CNN spokesman said the network stands by the poll.

I have retained highly respected pollster, McLaughlin & Associates, to analyze todays CNN Poll (and others), which I felt were FAKE based on the incredible enthusiasm we are receiving. Read analysis for yourself. This is the same thing they and others did when we defeated…

If the US presidential election were to be held tomorrow, Trump would most likely not survive. But it’s not being held tomorrow. November 3 is still five months away, and 2020 has been nothing if not full of surprises so far.

The most recent election-shattering sequences of events – widespread social unrest over police brutality and racism – would seem to favour the challenger. Professed public support for the protesters’ cause is strong (support for the protests themselves is more muddled, however) and Trump regularly receives low marks for his handling of race relations.

Racial attitudes are deeply ingrained in the US psyche, as is to be expected on a continent where slavery was the law of the land for 300 years after Europeans arrived and racism was institutionalised across society for more than 100 years after that. The Civil Rights Act of 1964 may have changed the laws, but the underlying attitudes remained.

But what if people are lying to pollsters?

Political scientists have a term for such lying: the Bradley Effect. Named for a Black former mayor of Los Angeles, Tom Bradley, who in 1982 lost a gubernatorial election in California to George Deukmejian, a white Armenian-American, despite being significantly ahead in the polls leading up the vote, the theory posits that some white voters will lie to pollsters about who they are planning on voting for when Black candidates are on the ballot.

The Bradley effect – similar theories have cropped up in other countries, such as the so-called Shy Tory Factor in the United Kingdom – is far from universally accepted and revolves primarily around candidates themselves.

It may explain why Trump has opted for a law-and-order mantra over the more conciliatory tone of his opponent. The 73-year-old Trump (who turns 74 this Sunday) was in his early 20s when Republican Richard Nixon summoned his “silent majority” to the polls in 1968 and ended up winning the US presidency, despite being challenged from the right by segregationist George Wallace.

Academic research published in the aftermath of the 1968 election found convincing evidence that the widespread violent unrest that year – arguably the most tumultuous year of the past five decades before 2020 came along – steered voters into the Republican camp and tipped the election in Nixon’s favour.

This time may be different. Ubiquitous social media means Americans can no longer ignore evidence of police brutality. The protests may catalyse real change in the form of laws and policies, rather than initiatives and promises to do better. Much more so than in previous unrest, white protesters have joined the movement and marched alongside Americans of all stripes. Three generations into the civil rights era, maybe racial attitudes in aggregate have actually evolved.

Before Democrats proclaim themselves the obvious choice in the current environment and crow about Biden’s widening lead in the polls, however, they would do well to remember 2016. In June 2016, poll averages monitored by RealClearPolitics showed Trump trailing Democrat Hillary Clinton by six to eight points nationwide. When October rolled around, Clinton was still ahead of Trump in most of those polls.

We all know how that ended.