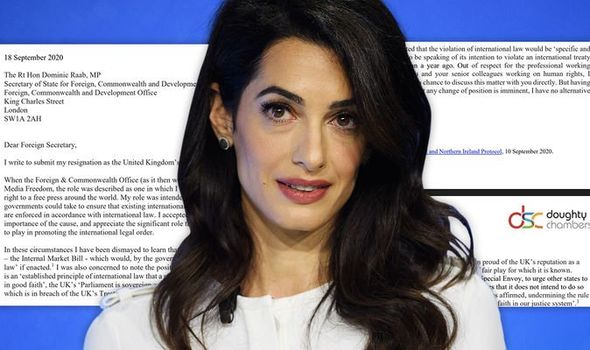 The high profile human rights lawyer, and wife of Hollywood actor George Clooney, represented the UK Government on promoting freedom of the press.

She has quit the role in protest at the UK’s Internal Market Bill which the Government has admitted risks breaking international law.

In her resignation letter to Foreign Secretary Dominic Raab, she said: “It is lamentable for the UK to be speaking of its intention to violate an international treaty signed by the Prime Minister less than a year ago.”

She said she felt “dismayed” to learn the Government intends to push ahead with the Bill which would break international law.

Mrs Clooney said she had delayed resigning until she had met with Mr Raab to discuss the controversial Bill.

She said he offered her “no assurance that any change of position is imminent” which left her with “no alternative but to resign”.

The top lawyer said she was “disappointed” to have to resign because “I have always been proud of the UK’s reputation as a champion of the international legal order, and of the culture of fair play for which it is known”.

“However, very sadly, it has now become untenable for me, as Special Envoy, to urge other states to respect and enforce international obligations while the UK declares that it does not intend to do so itself.

“As the President of the Bar Council of England and Wales has affirmed, undermining the rule of law that ‘this country is built on … will fatally puncture people’s faith in our justice system’.

“And it threatens to embolden autocratic regimes that violate international law with devastating consequences all over the world.”