Dr. Scott Atlas arrived at the White House as a coronavirus contrarian, questioning controls like masks. He has angered top health officials while pushing a suite of disputed policy prescriptions. 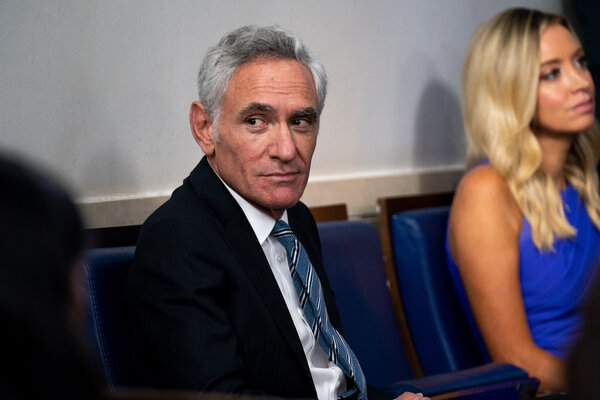 WASHINGTON — Dr. Scott W. Atlas has argued that the science of mask wearing is uncertain, that children cannot pass on the coronavirus and that the role of the government is not to stamp out the virus but to protect its most vulnerable citizens as Covid-19 takes its course.

Ideas like these, both ideologically freighted and scientifically disputed, have propelled the radiologist and senior fellow at Stanford University’s conservative Hoover Institution into President Trump’s White House, where he is pushing to reshape the administration’s response to the pandemic.

Mr. Trump has embraced Dr. Atlas, as has Mark Meadows, the White House chief of staff, even as he upsets the balance of power within the White House coronavirus task force with ideas that top government doctors and scientists like Anthony S. Fauci, Deborah L. Birx and Jerome Adams, the surgeon general, find misguided — even dangerous — according to people familiar with the task force’s deliberations.

“I think Trump clearly does not like the advice he was receiving from the people who are the experts — Fauci, Birx, etc. — so he has slowly shifted from their advice to somebody who tells him what he wants to hear,” said Dr. Carlos del Rio, an infectious disease expert at Emory University who is close to Dr. Birx, the White House coronavirus response coordinator.

Dr. Atlas is neither an epidemiologist nor an infectious disease expert, the two jobs usually associated with pandemic response. But his frequent appearances on Fox News Channel and his ideological surety caught the president’s eye.

So when Mr. Trump resumed his coronavirus news conferences in July and August, it was Dr. Atlas who helped prepare his briefing materials, according to people familiar with them. And it was his ideas that spilled from the president’s mouth.

“He has many great ideas,” Mr. Trump told reporters at a White House briefing last month with Dr. Atlas seated feet away. “And he thinks what we’ve done is really good, and now we’ll take it to a new level.”

The core of his appeal in the West Wing rests in his libertarian-style approach to disease management in which the government focuses on small populations of at-risk individuals — the elderly, the sick and the immune-compromised — and minimizes restrictions for the rest of the population, akin to an approach used to disastrous effect in Sweden. The argument: Most people infected by the coronavirus will not get seriously ill, and at some point, enough people will have antibodies from Covid-19 to deprive the virus of carriers — “herd immunity.”

Dr. Atlas’s push has led to repeated private confrontations with Dr. Birx, who in recent weeks has been advocating rigorous rules on wearing masks, limiting bars and restaurants, and minimizing large public gatherings.