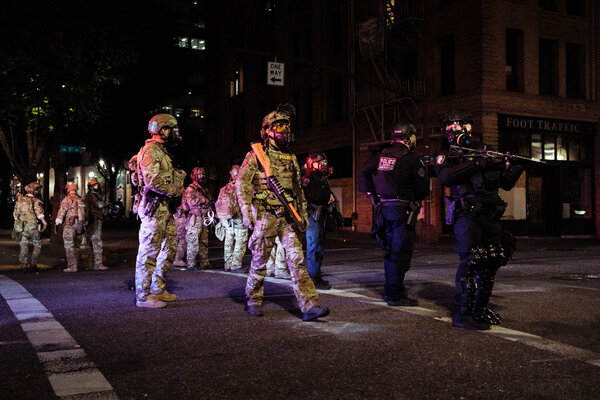 WASHINGTON — In an unusual move by a committee chairman in the president’s own party, Senator Ron Wyden of Oregon is refusing to schedule a hearing for President Biden’s nominee to run U.S. Customs and Border Protection until the administration answers questions about the federal response to the unrest in Portland, Ore., last summer.

Mr. Wyden, a Democrat and the chairman of the Senate Finance Committee, notified the White House this week of his decision to delay a hearing for Chris Magnus, the police chief in Tucson, Ariz. Mr. Biden nominated Chief Magnus in April to run the agency, which plays a central role in addressing the influx of migrants at the country’s southern border.

Mr. Wyden said that for months, he had been asking officials from the Justice and Homeland Security Departments to answer specific questions about how the agencies, under former President Donald J. Trump, prepared for the extraordinary step of sending federal law enforcement officers into the streets of Portland, and what happened on the ground, when protests there turned violent after George Floyd’s murder by a police officer in Minneapolis.

Standing up a military-type presence in the middle of downtown protests against police violence remains one of the most contentious decisions that Mr. Trump made during his time in office.

“Six months into the new administration, the Department of Homeland Security and Justice have failed to answer basic questions about how the Trump administration misused federal resources to stoke violence against peaceful protesters in my hometown,” Mr. Wyden said in a statement on Wednesday.

Mr. Wyden is a liberal who holds one of the most powerful posts in the Senate. He was elected to the chamber in 1996 after serving in the House since 1981, where he represented a district that includes parts of Portland.