Former President Donald J. Trump’s second impeachment trial began on Tuesday, 370 days after he was acquitted of high crimes and misdemeanors in his first trial. He is accused of “incitement of insurrection” for his part in kindling the violence on Jan. 6 at the U.S. Capitol. House impeachment managers and Mr. Trump’s defense team clashed over whether the Constitution allowed the Senate to hold a trial of a former president, ultimately deciding it could move forward.

Here are some takeaways from the first day.

Senators ruled that a former president can, indeed, stand trial for impeachment.

In a 56-to-44 vote, the Senate rejected the argument from Mr. Trump’s defense team, and decided along mostly party lines that it had the jurisdiction to try an impeached former president. This paved the way for the trial to proceed on Wednesday.

The impeachment managers, led by Representative Jamie Raskin of Maryland, argued that dismissing this impeachment trial would create a “January exception,” setting the precedent for a lame-duck president to act without consequence in the final weeks of his administration.

The defense team characterized the prosecution’s case as a “snap impeachment” and argued that a former president should not have to stand trial because it would establish the precedent for any former official to be punished after leaving office at the whim of the party in power.

On the question of jurisdiction, only a simple majority was required, unlike the two-thirds majority needed for a conviction. Six Republicans joined all 50 Democrats in deciding that the Senate could proceed with the trial.

Democrats, led by Raskin, promised compelling video footage of the events of Jan. 6, and they delivered. 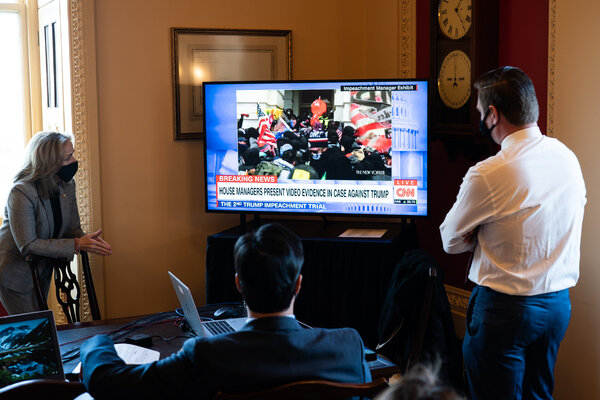 In a 13-minute video of scenes from the Jan. 6 assault on the Capitol, the lead House impeachment manager, Mr. Raskin, showed a graphic visual record of the attack, including rioters’ explicit language and rally cries, as well as clips of Mr. Trump’s comments during the day — like his speech to supporters before some of them stormed the Capitol and a Twitter post, hours after the attacks, in which he wrote, “Remember this day forever.”

The scenes of chaos in the video showed a mob of protesters violently pushing past security barricades and lines of police officers. Footage from inside the building included an officer screaming as he was being crushed by a door as well as the gunshot fired by another officer, which killed one of the rioters, Ashli Babbitt.

For many of the senators on Tuesday, the footage delivered different vantage points than what they experienced firsthand, as they were rushed out of the very same Senate chamber in shock and fear.

One of Mr. Trump’s defense lawyers, David I. Schoen, accused the House managers of hiring a “movie company” to string together the most disturbing footage from that day. Mr. Schoen also offered a video account featuring a collection of calls by Democrats for Mr. Trump’s impeachment over the past four years, a false equivalency as none of those comments led to violence.

The expected outcome of this trial is the same as Mr. Trump’s first.

Even though it is a new Senate — with Democrats in the majority — and the nature of what Mr. Trump is accused of is different than the allegations he faced in his first impeachment trial, there is little question that Mr. Trump will ultimately be acquitted, the same as he was a year ago.

For Democrats, a guilty verdict would be a formal, permanent renunciation of Mr. Trump’s behavior. If Mr. Trump were to be convicted, the Senate could hold a vote to decide whether to bar him from running for office again — something Democrats have argued is in the country’s best interest.

An acquittal would give Republicans a stay of condemnation of the most popular member of their party. But it would only delay the inevitable reckoning their party faces between the more moderate members and the far-right wing that not only defends Mr. Trump but also seeks to punish fellow Republicans for betraying him.

For Democrats, an acquittal could still be a political victory of sorts because the trial was an opportunity to publicly condemn Mr. Trump’s actions in his last days as president and delivered a formal record of Republican senators refusing to punish him.

Already, Senator Mike Lee, Republican of Utah, has faced criticism for suggesting that Mr. Trump be given a pass for the events of Jan. 6.

“Look, everyone makes mistakes, everyone is entitled to a mulligan once in a while,” Mr. Lee said on Fox News after the House managers’ arguments, using a golf term for a do-over.