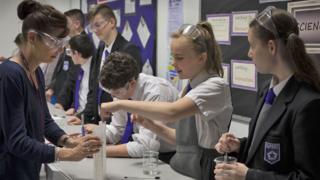 Pupils in England will not be going back to school full time in September if the 2m social distancing rule is still in place, academy leaders say.

Hamid Patel, chief executive of the Star Academy group, is calling for an urgent recognition that schools will not have capacity for a full return.

He says schools need a decision on social distancing to be able to start making plans.

The government has said it wants all schools and pupils back for the autumn.

Mr Patel, who is also on the board of the education watchdog Ofsted, says that with 2m distancing in place, no more than 50% of secondary pupils could attend, and in some schools it would be lower.

Primary pupils are being kept in “protective bubbles” of no more than 15 pupils and for secondary schools going back in September, the guidance calls for a distancing of 2m.

The lack of space in primary schools, because of small groups needing more classrooms, has already stopped primary schools bringing back all year groups.

If the ambition is “genuinely for all schools to reopen in September, open and honest discussions are needed” about what “workable solutions” could be achieved, says Mr Patel.

Mr Patel, whose schools include some at the top of the league tables, says a choice will have to be made about social distancing measures and the practical capacity available to schools.

He believes the suggestion to put pupils unable to fit in school in other nearby empty spaces, such as sports centres, is a “red herring” with too many practical problems, such as a lack of extra staff and the difficulties in converting accommodation into classrooms.

The academy head warns this has become a “distraction” while the “clock ticks inexorably onwards”.

He wants a national plan to be put in place as a matter of urgency.

Another academy leader, Sir Jon Coles, head of United Learning, also rejects the plausibility of relying on nearby empty buildings.

He says, to create these extra classrooms, while maintaining the current groups of 15 pupils, will require another 250,000 teachers, which is not realistic.

“The reality is we will not be able to open schools fully to all pupils until the public health advice is that it is safe to teach in groups of up to 30. That is what schools have the space and staffing to do,” he posted on Twitter.

Mr Patel says if the social distancing rule is reduced to 1m, that in some schools, with staggered lunchtimes and one-way systems, it will be possible to bring back all or most pupils.

But Steve Chalke, head of the Oasis Trust school group, says that even with 1m many schools will struggle to get pupils back together.

Mr Chalke was much more positive about the possibility of using other buildings, including churches and hotels.

“You have to think of a school as a community, not a building,” he said.

However, there needed to be a recognition that it would still mean rotas for school attendance in the autumn, he added.

This could be improved so that pupils would focus on group activities when in school and could be given homework to cover the days at home.

Mr Chalke says school leaders were keen to get involved in finding a plan for the return, and wanted a strategy, but warned schools did not want to be left “waiting until mid-August”.

The leader of the National Association of Head Teachers, Paul Whiteman, says the government needs to “get off the podium” and engage with school leaders about the practicalities of the return in September.

“Let’s look at the art of the possible,” he said.

When there is already a “recruitment crisis” for teachers, he casts doubt on the feasibility of hiring thousands more teachers for new temporary classrooms in 10 weeks.

Mr Whiteman recognised the difficulty for the government in knowing how high infection rates will be in the autumn, but he suggested that schools could at least be given a series of scenarios to plan around, saying that preparations have to start “as soon as possible”.

A Department for Education spokesman said: “Being in school is vital for children’s education and their well-being, which is why we’re working to get all pupils back into classrooms by September.

“We know that young children cannot be expected to follow social distancing in schools, and our guidance is clear schools should implement a range of protective measures, including reducing the size of classes and keeping children in small groups.”