Between the hours of 9am and 2.15pm, Adriana Ruiz’s two-bedroom apartment in Cudahy, California, turns into a makeshift schoolhouse.

She spreads her five children, who are aged 10 to 16, across two bedrooms and the living room, with two sharing the kitchen table.

‘Who are we willing to sacrifice?’: teachers’ fears grow as US schools plan reopenings

All five kids were scheduled to meet their homeroom and classroom teachers over Zoom at 1pm on Wednesday afternoon, the second day of online orientation in the Los Angeles Unified school district, the second-largest school district in the US with more than 600,000 students.

Ruiz, an activist with Speak Up, a parent advocacy group in Los Angeles, found herself running around the apartment trying to introduce herself to her childrens’ teachers, “letting [them] know that I am home and that I am present, but I can’t stick with one child the whole time. I’m bouncing back and forth between each one,” she said.

With her husband at work during the school day, Ruiz has found herself having to juggle her job of being a caregiver to her sister while also being a parent, tutor and, sometimes, tech support when a laptop freezes.

She knows the school year will be a big juggling act, but ultimately believes virtual learning is the best option for her kids. She was relieved when the school district announced in July it would start the school year online. “I just don’t think we’re at that point where it’s safe for our children to go back to school,” Ruiz said.

There are more than 55 million students attending over 130,000 schools in the US. With the Covid-19 pandemic ravaging many parts of the country, killing more than 170,000 people in the last five months, how and if schools should reopen to students or switch to virtual learning has been a months-long debate that has largely not seen any resolution.

The US is far from being the first country to grapple with reopening its schools. But the spread of Covid-19 has been far more severe in the US than these countries that have opened their classrooms again. Though epidemiologists largely agree that young children do not see the virus’ worst effects, less is known about the risk children pose to adults. 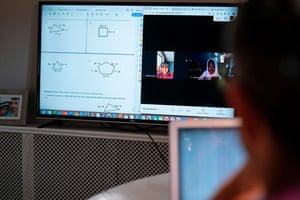 With the school year starting after a pandemic summer, policymakers and school leaders have had to use uncertain information about how kids spread the virus to take decisive action. The result has been a patchwork of policies and protocols that vary from state to state and can even differ between neighboring school districts.

This patchwork method is something that epidemiologists, including Dr Anthony Fauci, the nation’s top infectious disease expert, have said is necessary given the size of the country and the varying effects the virus has had in it.

“We live in a big country that is very heterogeneous with regard to the level of virus. You’ve got to look at what is going on in the community,” Fauci said in a recent talk with George Washington University,.

It sounds simple: Schools in communities with higher community spread should take extra precautions, even consider online-only learning, until transmissions taper down. Areas with lower spreads can reopen with a little more freedom.

But the problem is that states and local school districts around the US have reopened or have plans to reopen in communities that have higher rates of transmission. And in areas where transmission is lower, schools often lack the funding and time to implement even the most basic safety protocols, like controlling air ventilation in classrooms.

The result has been a mess. Teachers have gone on strikes to shut down schools amid safety concerns. Photos of maskless high school students in Georgia went viral and were followed with reports of outbreaks in those schools. Parents have been asked to make what feel like life or death decisions amid the confusion.

To circumvent mounting concerns about the inadequacy of potential safety protocols, along with higher transmission rates in some communities, many school districts, including some of the largest in the US, are starting the year with online-only classes.

The move has been both a relief and a cause of great stress for many teachers and parents. Online learning puts the likelihood of community outbreaks at zero, which eases communities that have dealt with the worst of the virus. But switching to online classes in the spring has shown teachers and parents that virtual learning comes with many setbacks. 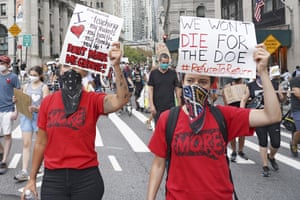 For many parents, a pressing concern is how they can both monitor their childrens’ online learning while also working full-time.

Lorraine Quinones, a mother of three and a teacher at an elementary school in Los Angeles, feels fortunate that, though she has to be live with her students for most of the school day, she has a 17-year-old who can help her six-year-old with virtual learning, and her nine-year-old is able to navigate it on her own.

“Unfortunately my kids are going to have to be on their own in a sense, which is heartbreaking as a mother,” Quinones said.

Meanwhile, Lauren Kullman, a theater teacher for students in pre-kindergarten to eighth grade in Chicago, does not know how she is going to manage teaching live online classes while taking care of her children, who are five and two. While Kullman, who is immunocompromised, is grateful that Chicago public schools decided to start the year virtually, she is obligated to teach multiple live classes a day when she will be unable to care for her children. The plan is to give both kids walkie-talkies in case they need her or her husband, who is also a teacher.

“It doesn’t seem like there’s grace being afforded to teachers, it feels much more like well this is what you wanted, so now this is what you gotta do,” Kullman said. “I have to have people in power see me as a human, not as a teacher bot.”

Virtual learning has also come under criticism from child development experts, who note that it is ineffective for young children without active parent involvement. For kids of all ages, including high school students, the school setting is also essential for social and emotional well-being. The National Academies of Science, Engineering and Medicine (NAS) and the American Academy of Pediatrics strongly advised that policymakers prioritize reopening schools given how important they are for wellbeing and development. Online learning is also almost guaranteed to exacerbate existing racial and income inequalities in education.

“Covid isn’t going away anytime soon, and keeping kids out of schools for a year and a half or two years is going to have significant consequences to their cognitive development and to their social emotional development, really across the entire spectrum,” said Dimitri Christakis, a pediatrician and professor of medicine at the University of Washington who co-authored the NAS’ recommendations on school reopenings. “We declared the pork supply to be a national priority. I’m much more worried about the brain supply than I am about the pork supply.”

But some of the plans to start in-person learning have come under intense scrutiny, with policymakers echoing concerns about the detrimental effects of online learning while seemingly ignoring concerns from teachers and parents about the spread of the virus.

In Florida, which saw huge surges in July, state leadership has tied reopening for in-person classes with school funding, threatening to refuse state aid if a school sticks to virtual learning.

The state prohibits teachers from striking, so the Florida Education Association, the state’s largest teachers’ union, filed a lawsuit against the state for forcing schools to open despite concern from medical experts and teachers about the preparedness of schools to reopen and community transmissions in the state.

Rick Colgan, a freshman social studies teacher in Orlando, Florida, said on Wednesday that his school’s administration offered little reassurance of what going back to school would look like on Friday. They gave him the classroom he would be teaching in and a roster of students. Masks will be mandatory, but the school, which has about 2,000 students, could not guarantee that social distancing will be possible. Students were able to opt into virtual learning, but Colgan said he was unsure of how he would be teaching both his virtual and in-person students.

“I’m extremely nervous, there’s a knot in my stomach. I haven’t been sleeping well,” Colgan said of the stress of going back to school. “The teachers that I talk to, it’s the same thing.” 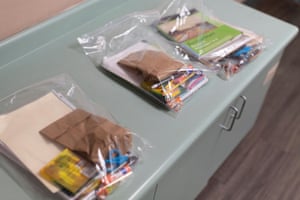 Farther north, New York City’s plan to reopen the largest school district in the US has caused a weeks-long debate between city leaders, teachers and parents.

Bill de Blasio, the mayor, has stuck with a plan to reopen schools with a hybrid model – something that has been scrutinized by epidemiologists. Students will go to school in small groups for two days a week and stay home for three. While parents have the option to opt their kids in for online-only, schools cannot opt out of the hybrid plan.

Though New York City was devastated by the virus in the spring, it has dramatically lowered its transmission rate since, seeing well under a 1,000 cases a day. De Blasio said that school will reopen as long as the citywide infection rate is below 3%. Yet both parents and teachers have come out in opposition of the plan, saying that many individual communities have infection rates above 3%, and they know schools do not have the funding to ensure the best safety measures are in place.

Jessamyn Lee, a mother of two based in Brooklyn, said that there has been scaffolding around her childrens’ school for over a year because the school needed brick repointing that has yet to happen. “Parents see this stuff and say, the city hasn’t taken care of our school buildings so far.”

Liat Olenick, an elementary school science teacher based in Brooklyn, said teachers are also frustrated that the city has not sought the input of the plan’s most important stakeholders, only surveying teachers once to see what type of school schedule they would want to follow.

“It has just put all the people who actually spend everyday in school in the position of having to push and advocate really hard just to ask basic questions. It’s been a really flawed process,” Olenick said.

The New York City teachers union has threatened to strike if schools reopen in-person before it is safe, creating a checklist of what PPE, ventilation and other safety protocols schools need to have in order to reopen. De Blasio has floated the possibility of schools reopening on 10 September, but an official first day has yet to be announced.