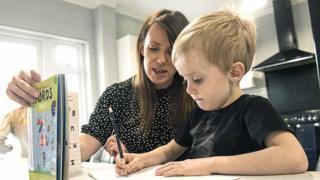 A majority of British children struggled to continue learning at home during the lockdown, a report says.

The Office for National Statistics research found that of the 52% who struggled, three-quarters of parents gave a lack of motivation as a reason.

The research, based on weekly household surveys between April and June, also found women’s well-being was being more adversely affected than that of men.

It also showed wide disparities in what families were able to do.

The ONS researchers assessed nationally representative surveys of more than 12,000 people in Great Britain between 3 April and 7 June about their experiences of home-schooling during the coronavirus pandemic.

Schools closed for most pupils at the end of March in England, Wales and Scotland, as the pandemic took hold. Some schools re-opened in England on or around 1 June for some year groups.

Perhaps surprisingly, the research found only one in 10 parents complained about lack of devices to work on, although this rate doubled for single-parent households.

Providing laptops for disadvantaged children has been a focus of England’s government.

However, lack of motivation was by far the biggest reason for parents to say their children had found it difficult to carry on with school work.

One-in-three women said the situation was negatively affecting their well-being, compared with one in five men.

Some 43% of home-schooling parents said their children’s well-being was being negatively impacted by the experience.

Parents who had not been working in the previous seven days were significantly more likely to have been helping children with their school work (86%), compared with those who had worked (74%).

And parents with a university education were more likely to have attempted home schooling than those without.

Notably, just under half (49%) of parents were confident to some degree in their ability to help their children’s learning.

While nearly a third of working parents said the requirement to home school had been negatively affecting their job.

A separate report by the ONS, found women were bearing the brunt of the home schooling experience, with women tending to carry out more educational and caring tasks during lockdown.

The findings will be particularly worrying for parents of children facing exams in the near future.

Although exam boards have said they will be taking account of some of the lost learning by delaying next summer’s exams slightly, there have been calls fro head teachers for many more changes to ensure pupils are treated fairly.

In England, the government says all pupils will be back in school in September, but there are concerns that local lockdowns could see some children sent back home.

Schools in Scotland and Northern Ireland are aiming for a full return for all pupils when the new term begins.

In Wales, ministers have said blended learning – a mix of home and classroom learning – would be likely for some time to come.