Gavin Williamson has refused to personally back the head of Ofqual, Sally Collier, after the A-level grades fiasco led to a humiliating government U-turn.

In a morning round of interviews, the education secretary said Collier – who has not spoken publicly since students’ results were published last Thursday – had worked hard in her position as head of the exams regulator.

However, when asked if he backed her to stay in post, he failed to endorse Collier, instead saying he would continue to work with the organisation.

Williamson is facing significant criticism over his own role in the results chaos, with the Tory chair of the Commons education select committee, Robert Halfon, calling for an end to “government by computer”, in reference to the algorithm used to moderate the initial results.

On Monday the government announced it would allow A-level and GCSE pupils to use grades awarded by teachers, after the computer moderation process downgraded marks. In some cases the downgrades led to A-level pupils missing out on university places. 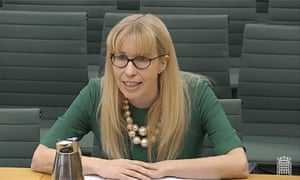 Asked twice on BBC Radio 4’s Today programme whether he had confidence in the head of Ofqual and whether she should stay in her job, Williamson said: “Well we’ve worked with Ofqual and at every stage I know that Ofqual have done absolutely everything they can do to ensure that they have fairness within the system and continue to work with Ofqual, and the head of Ofqual, to ensure that we deliver youngsters with grades they deserve.”

Williamson apologised for the fiasco but said the model developed for A-levels in England, Wales and Northern Ireland had been accepted across all three nations, and they had worked closely with Ofqual, which had given them “absolute reassurance” that this was the best route to take in lieu of students taking exams.

On whether he had offered to resign personally, Williamson said his focus was on grades, getting pupils back to school in September, and the prime minister’s “levelling up agenda”.

Halfon, in an interview with ITV’s Good Morning Britain, said the problems with the exams system should be a “massive wake-up call” for the government.

“I want our government to be a government of social justice, of the land of opportunity, of the workers, as the prime minister promised it to be. This has been a mega mess and should not have happened, and [Williamson] has got to, I think, learn from this and just make sure these kind of things do not happen in the future,” he said.

“I think the lesson of this is you can’t just have technocratic government and government by computer, we’ve got to be a government that empathises with ordinary folk and realise that the decisions that are made affect the lives of thousands of people individually.