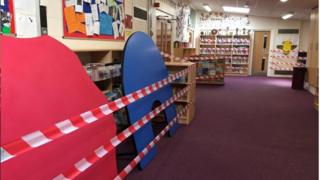 School governors want ministers to drop plans for all primary pupils in England to return before the summer holidays.

The first wave of children is due back from Monday but the government wants all primary pupils in class for the last four weeks of term.

This ambition piles pressure on schools “when actually it wouldn’t be safe”, said Emma Knights, chief executive of the National Governance Association.

Ministers say the return of all pupils will depend on updated safety advice.

Last week the schools minister Nick Gibb told MPs any decision on whether all pupils should return would be led by the science, and no decision had as yet been made.

Many schools have been open to the children of key workers and vulnerable children throughout the lockdown, with all the others attempting to follow the primary curriculum at home.

From Monday, the government wants all pupils in Reception, Year 1 and Year 6 to return to their classrooms, with no more than 15 pupils per class.

This means every class of 30 would have to be spread across two classrooms.

Under these rules, if all year groups went back, there would not be enough classrooms in the vast majority of primary schools.

Ms Knights has written to the education secretary, Gavin Williamson, “asking him to review and to drop” the expectation that all primary pupils should be back at school for the last four weeks of term.

“Unless something dramatic changes very soon in terms of the government’s scientific and medical advice, it will simply not be possible for primary schools to invite all pupils back for a whole month of education before the summer holidays,” she told the BBC.

“It is adding to uncertainty for parents, but also extra pressure on school leaders and governing boards who think that they need to try and do this when actually it wouldn’t be safe.”

Mr Williamson has not as yet responded to the letter.

Just over 2,350 governors shared their plans for the return of pupils with the BBC.

Many say, even with the limited numbers due to return in the first phase, they are already having to ask pupils to attend part-time, due to space constraints and the need for deep cleaning to keep the virus at bay.

Of the governors who answered a BBC snapshot questionnaire:

About four in five said they were able to accept pupils from all the eligible year groups.

There are wide variations in the numbers of parents who have committed to sending their children to school from Monday, with some schools expecting almost everyone, and others just a handful.

Of the 2,350 governors asked whether it would be possible to have all pupils back for the last four weeks of term, 1,682 said this was unlikely or very unlikely.

“It would be physically impossible to bring all pupils back with reduced class sizes – we do not have the extra classrooms or staff to accommodate them safely,” one governor wrote.

“It is going to be challenging enough to get Reception, Year 1 and Year 6 pupils back into school, respecting all of the social distancing and also providing spaces for key worker and vulnerable children. This will take up all the classroom space in the school and use up all of the staff who are available,” wrote another.

However, another expressed frustration at being unable to welcome all children back to school immediately, saying parents “need a break and the children are getting feral”.

Overall, governors expressed concerns about the pressure placed on themselves and on headteachers by the pandemic.

“I can only say that the professionalism of our team has shone through and for everyone’s sake we hope the advice is right and that safe and effective learning returns for some and continued remote learning carries on for others,” said Nick Horslen, chair of governors at Kings Wood Primary and Nursery School in High Wycombe.

“The situation is a long way from ideal but the creativity and determination to help children is the constant priority.”

Schools in Wales do not have a date for returning and schools in Scotland and Northern Ireland are going back in August.