SINGAPORE – Singapore’s overall inflation rose to a more than eight-year high in October, helped by higher car prices and housing rents, while core inflation climbed to its highest in nearly three years.

Both benchmarks rose faster than economists had predicted.

Overall inflation jumped to 3.2 per cent on a year-on-year basis, up from 2.5 per cent in September. This is the highest since March 2013 and beats analysts’ 2.8 per cent forecast.

The uptick reflected stronger private transport and rental costs, in addition to the higher core inflation, said the Monetary Authority of Singapore (MAS) and the Ministry of Trade and Industry (MTI) on Tuesday (Nov 23).

Core inflation, which excludes rents and private road transport costs, climbed to 1.5 per cent last month from 1.2 per cent in September. The increase was due to rising services and food prices, and a smaller decline in the cost of retail and other goods.

The last time the core inflation rate was higher was in March 2019, when it hit 1.7 per cent.

Core inflation, which better captures the underlying trend in consumer prices, is the measure that MAS monitors most closely in its review of Singapore’s monetary policy.

MAS and MTI said that rising imported and labour costs, as well as recovery in domestic economic activity, will support a steady increase in core inflation in the quarters ahead.

The cost of services rose more sharply in October – by 1.6 per cent compared with September’s 1.2 per cent – mainly due to higher inflation of airfares and holiday expenses with the easing of border restrictions and establishment of vaccinated travel lanes.

Tuition and other fees, as well as prices of recreational and cultural services, also saw larger increases.

Food inflation edged up to 1.7 per cent, compared with 1.6 per cent in September, as non-cooked food prices rose at a faster pace while the inflation of prepared meals remained broadly unchanged.

The cost of retail and other goods declined at a slower pace of 0.4 per cent last month, compared with the 1 per cent fall in September, due to a smaller decline in the prices of clothing, footwear and telecommunications equipment.

Private transport inflation rose to 14.3 per cent, from 10.8 per cent the previous month, on the back of a stronger increase in car prices.

Accommodation inflation also rose, to 2.5 per cent compared with 1.9 per cent in September, as it was lifted by a larger increase in housing rents. 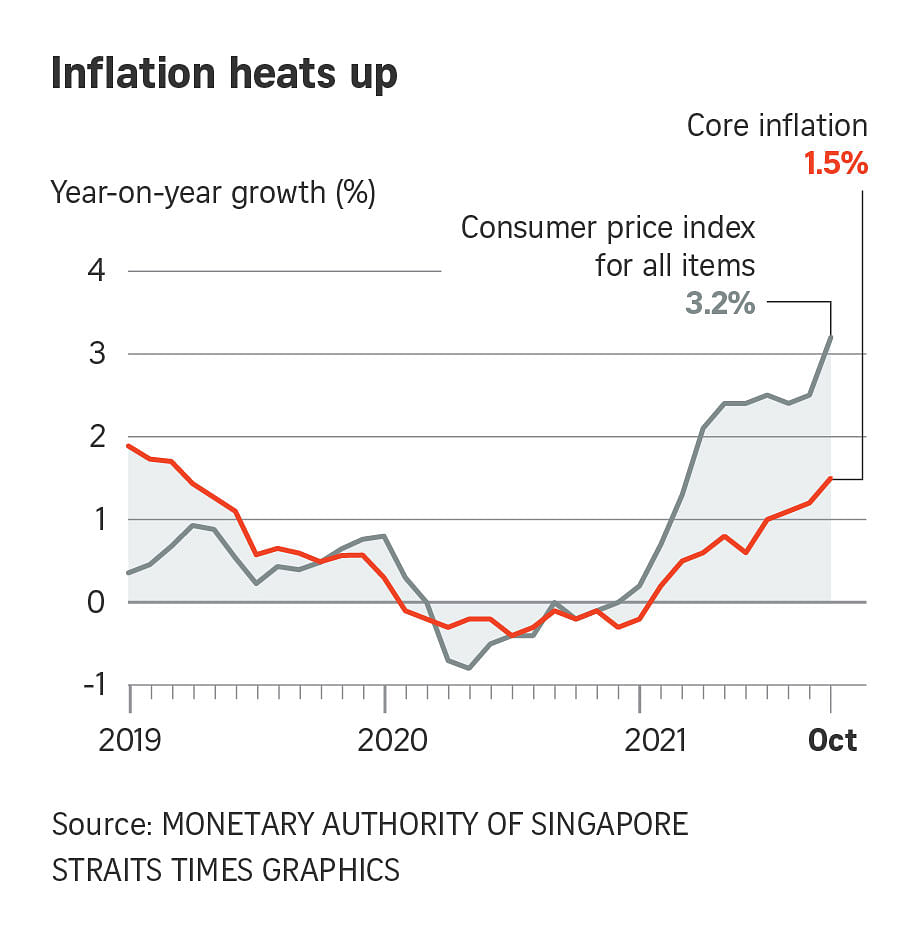 MAS and MTI said global inflation has remained elevated and this is likely to persist for some time.

“Notably, higher crude oil prices are supported by tight supply conditions, as well as strengthening demand. The supply-demand mismatch in various commodities and goods markets, as well as bottlenecks in global transportation, are likely to continue in the near term,” they said.

“On the domestic front, the labour market recovery is expected to become more entrenched with the easing of Covid-19 restrictions and a pickup in economic activity,” said MAS and MTI, adding that wages have picked up and are expected to rise at a steady pace as the slack in the labour market dissipates.

Consumer demand is also likely to strengthen as the Covid-19 situation in Singapore stabilises, with the possibility of “greater pass-through of accumulating business costs to consumer prices”, they added.

MAS and MTI maintained their inflation expectations at the upper end of their forecast ranges for 2021.

For 2021 as a whole, core inflation is seen coming in near the upper end of the zero per cent to 1 per cent forecast range and is projected to increase further to between 1 per cent and 2 per cent in 2022.

All-items inflation is forecast to come in around 2 per cent this year and average 1.5 per cent to 2.5 per cent next year.

“Amid construction delays, accommodation inflation should remain firm and continue to support (overall) inflation in 2022. Meanwhile, private transport inflation is likely to moderate next year on the back of a slower pace of increase in COE (certificate of entitlement) premiums and petrol costs.”