LONDON (Reuters) – World shares inched higher led by Europe on Monday, after last week’s rout in U.S. technology stocks that saw $2.3 trillion in value wiped off in two days with investors taking note of lofty valuations when the global economy is still in a recession. 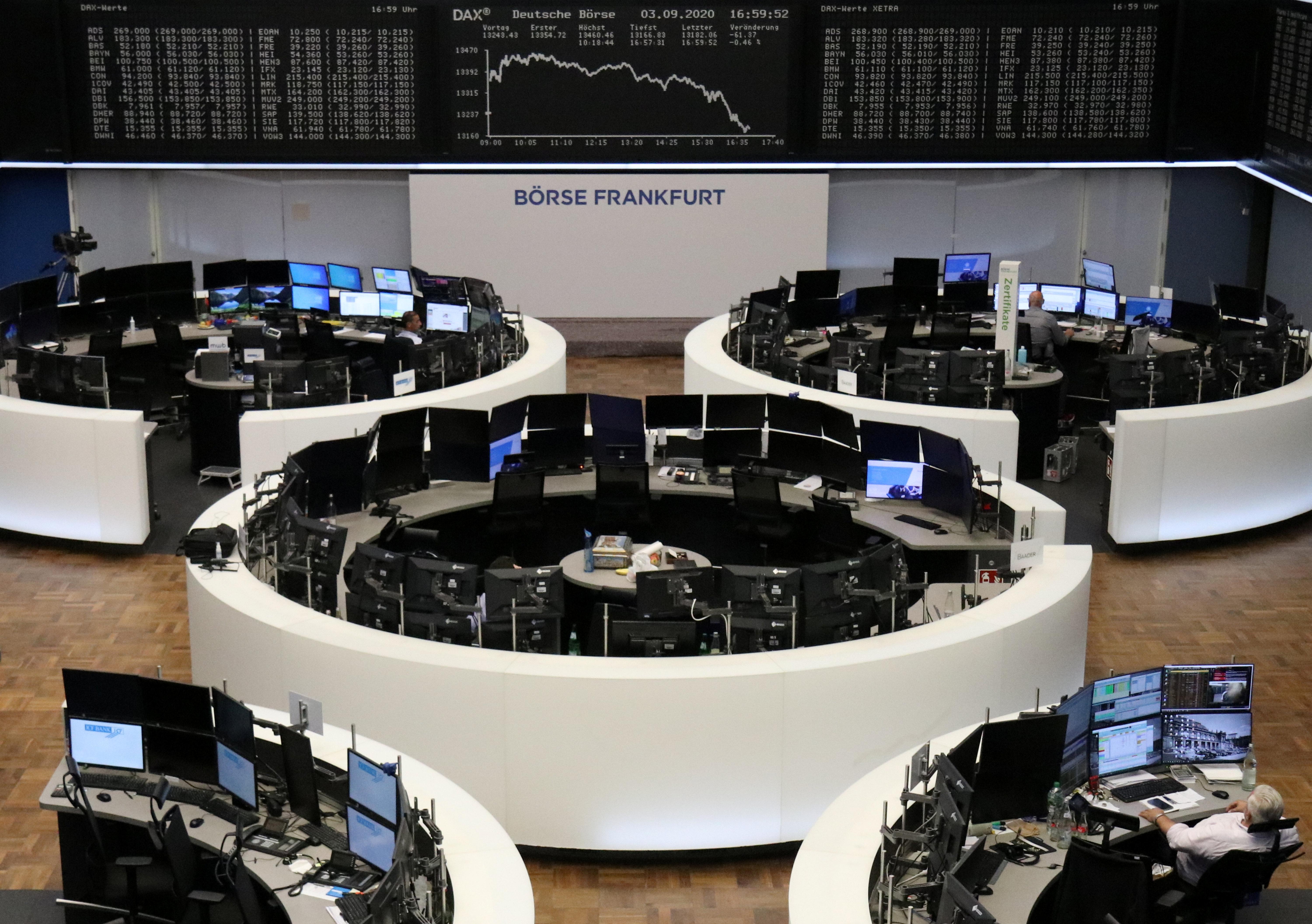 Market activity was likely to remain subdued for the rest of the day with the U.S. closed for the Labor Day holiday, though Nasdaq futures fell a further 1%.

“This market rally may likely pause given stretched valuations,” said Stephane Ekolo, an equity strategist at TFS Derivatives in London. “If earnings do not improve materially, investors might well need to buckle up and expect a correction.”

European bourses, which have fewer technology stocks compared with the United States, started the week in the black, driven by a 1.6% gain in Germany’s DAX and London’s FTSE 100.

UK bluechip stocks, many of which derive much of their profits overseas, were also helped by a falling pound, with Brexit talks plunging into crisis following Britain’s threat to override its EU divorce deal. Sterling fell around half a percent against the dollar and euro on Monday.

“It is almost inevitable that the perceived probability of ‘no deal’ will escalate over the coming weeks,” Goldman Sachs analysts wrote in a note.

The tech sell-off showed no signs of abating as Tesla, the poster child of the euphoria in U.S. big technology stocks, fell 4.5% in Frankfurt after it was excluded from a group of companies that were being added to the S&P 500.

U.S.-heavy MSCI world shares index was up 0.3%. The index had hit a record high last week, driven by unprecedented central bank stimulus, but the rally fizzled out last week amid worries over heady valuations and a patchy economic recovery.

“Our risk indices have begun to turn from their euphoria highs,” Jefferies said, adding that it was switching its weighting on the MSCI All-World index to “tactically bearish” in the short term.

“On the balance of probabilities, last week’s correction has further room to go.”

The mood across Asian markets was tentative. MSCI’s broadest index of Asia-Pacific shares outside Japan was last down 0.2% after two straight days of losses toppled it from a 2-1/2-year peak last week.

Data earlier on Monday showed Chinese imports fell 2.1% in August from a year earlier, confounding expectations for a 0.1% increase, in a sign of sluggish domestic demand. Exports jumped by a larger-than-expected 9.5%.

In currency markets, the dollar index gained 0.1% in holiday-thinned trade on Monday, while traders shifted their focus to the European Central Bank’s meeting on Thursday. Most analysts don’t expect a change in policy stance.

The dollar was flat against the yen at 106.28 ahead of a heavy week of macroeconomic data with figures on household spending, current account and gross domestic product due on Tuesday.

The message the ECB will deliver on its inflation forecasts is likely to set the direction for the euro, which has surged in the past few months.

European government bonds yields rose across the board on Monday on signs of an improved global economy and ahead of a week of healthy supply, as countries seek bond markets to help fund the response to the COVID-19 crisis.

In commodities, oil prices hit their lowest since July, after Saudi Arabia made the deepest monthly price cuts for supply to Asia in five months. U.S. crude fell 1.3% to $39.25 a barrel. Brent crude skidded to $42.11.

Fading optimism about a recovery in demand amid the coronavirus pandemic also hung heavy.