LOS ANGELES — In a startling move that marked the biggest challenge yet to Hollywood’s traditional way of doing business, Warner Bros. announced on Thursday that 17 movies — its entire 2021 slate — would each arrive simultaneously in theaters and on its sibling streaming service, the underperforming HBO Max.

Rather than having to wait roughly 90 days, the period that studios have long given theaters to play films exclusively, HBO Max subscribers will receive instant access to big-budget extravaganzas like a “Suicide Squad” sequel, “Godzilla vs. Kong,” “Dune” and “The Matrix 4.” Other movies speeding to living rooms next year include Lin-Manuel Miranda’s “In the Heights,” Clint Eastwood’s “Cry Macho,” the next “Conjuring” horror film, “Space Jam: A New Legacy” and a “Sopranos” prequel called “The Many Saints of Newark.”

While the move amounted to 17 shots in the arm for HBO Max, which has struggled to attract subscribers since its introduction in May for $15 a month, it was also a strikingly grim comment on the future of movie theaters. Even with a widely deployed vaccine, which is expected in the coming months, WarnerMedia does not believe that moviegoing in the United States will recover until at least next fall, an assessment that stands in sharp contrast with what other major movie studios and multiplex chains have signaled.

“Like a lot of businesses, theaters are in a tough spot right now,” Jason Kilar, WarnerMedia’s chief executive, said by phone. “We are all in the middle of a pandemic, and we are all trying to figure our way through it. One of the things we can do to be helpful to them is to provide them with a steady stream of big-budget, well-told stories.” Mr. Kilar said the company had no plans to be flexible; even if the coronavirus threat receded dramatically in the summer, the new distribution model will stand for the year.

There is one wrinkle: Each movie will appear on HBO Max for only one month before leaving the service. At that point, films will cycle through the usual release “windows,” leaving theaters when interest has run out and heading to iTunes, DVD and points beyond, eventually cycling back to HBO Max.

Toby Emmerich, chairman of the Warner Bros. Pictures Group, also pointed to the pandemic as driving the “day and date” distribution model. “It’s not clear that full normal will return even well into the fourth quarter of next year,” Mr. Emmerich said in a separate interview. “The epidemiologists who have been consulting with the company have painted a cautious picture.”

When pressed on whether the plan was temporary or permanent, Mr. Emmerich added, “We have to see what happens. We’re not predicting much of anything beyond next year.” (In a statement, Ann Sarnoff, chief executive of the WarnerMedia Studio and Networks Group, called it a “unique, one-year plan.”)

Mr. Emmerich emphasized that Warner’s movies would continue to have traditional theatrical releases outside of the United States, where HBO Max does not currently exist. “These are global releases with normal theatrical marketing campaigns,” he said.

HBO Max will begin rolling out overseas next year.

Many people in Hollywood saw WarnerMedia’s positioning of its move as disingenuous: It will be almost impossible to go back, and it may force other studios to abandon the old model. Fans trained to expect immediate gratification will not be eager to return to the days of giving theaters an exclusive period to play movies. AT&T, which owns WarnerMedia, also has made it clear that Mr. Kilar’s top priority is building HBO Max into a full-fledged competitor to Netflix, which has 73 million subscribers in the United States and almost 200 million worldwide. HBO subscribers hit a record 38 million at the end of September, but only about 8.6 million subscribers had activated HBO Max, according to AT&T regulatory filings.

As it moves to bolster HBO Max, WarnerMedia is almost assuredly giving up hundreds of millions in box office revenue, which means that some of its big-budget movies ($200 million or more in production costs, plus tens of millions of dollars in marketing spending) will lose money, regardless of their reception by audiences. But AT&T is mostly interested in the financial windfall that it stands to make in the longer term by turning HBO Max into a success.

The Walt Disney Company, for instance, has taken a beating from the pandemic, with its theme parks struggling in particular. But Disney shares are nonetheless trading at all-time highs because of the success of Disney+ over the last year. Next week, Disney will hold an investor day and outline its own plans for supercharging its streaming services, which include Hulu. Disney is also expected to shift release plans for coming films, making titles like “Cruella” instantly available online.

As soon as Warner’s plans became public on Thursday, WarnerMedia began marketing HBO Max subscriptions as a holiday gift. “I got you something nice this year,” the company said on Twitter, linking to a slick video of film clips and a message about how “the biggest premieres” next year will be coming to theaters and HBO Max on the “Exact. Same. Day.”

Mr. Emmerich downplayed the threat to theaters. “We really believe that in markets where HBO Max exists and theaters are also open that many consumers will chose the theatrical experience,” he said. “We hope that this will prove to be a win-win — for movie fans in the United States, for filmmakers because their movies won’t sit on a shelf and get stale, for theater owners who can rely on a stable supply of movies, for HBO Max subscribers.” 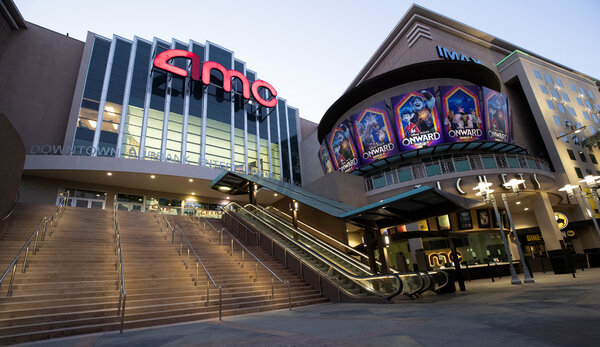 Last month, Warner Bros. tested the water on this strategy with the announcement that “Wonder Woman 1984,” which had already been delayed from its summer 2020 perch, would debut on Christmas Day in theaters and on HBO Max.

It was a framed as a singular event, and theater owners, desperate to fill screens with appealing content, happily agreed to it. “Given that atypical circumstances call for atypical economic relationships between studios and theaters, and atypical windows and releasing strategies, AMC is fully onboard for Warner Brothers’ announcement today,” Adam Aron, chief executive of AMC Entertainment, said at the time.

He was much less welcoming to an entire year of this practice, which provides no additional incentives to theaters.

“Clearly, WarnerMedia intends to sacrifice a considerable portion of the profitability of its movie studio division — and that of its production partners and filmmakers — to subsidize its HBO Max start-up,” Mr. Aron said in an email. “As for AMC, we will do all in our power to ensure that Warner does not do so at our expense. We have already commenced an immediate and urgent dialogue with the leadership of Warner on this subject.”

Another major theater chain, Cinemark, indicated that it had been caught by surprise. “In light of the current operating environment, we are making near-term booking decisions on a film-by-film basis,” a Cinemark spokesperson said. “At this time, Warner Bros. has not provided any details for the hybrid distribution model of their 2021 films.”

The Warner Bros. plan stands in stark contrast to one pursued by Universal Pictures, which has agreed to continue providing theaters with an exclusive play period of at least three weeks. Universal has signed deals with AMC, Cinemark and Canada’s top exhibitor, Cineplex, whereby films will bow exclusively in theaters for at least 17 days before moving to premium video-on-demand. The theater chains will each receive a cut of revenue from PVOD sales.

In her statement, Ms. Sarnoff said that Warner Bros. was “extremely grateful to our filmmaking partners for working with us on this innovative response to these circumstances.” That was news to many of the company’s partners, including Legendary Pictures, the production company behind “Godzilla vs. Kong.” Legendary and other producers were not consulted and only notified at the last minute (if at all), resulting in a day of furious phone calls behind the scenes.

Mr. Kilar said that filmmakers should be encouraged by this new way of releasing films.