The world’s two largest economies have been locked in a bitter trade battle.

The dispute has seen the US and China impose tariffs on hundreds of billions of dollars worth of one another’s goods.

In China, there is a perception that America is trying to curb its rise as a global economic power.

Negotiations are ongoing but have proven difficult. In January, the two sides signed a preliminary deal but some of the thorniest issues remain unresolved.

Uncertainties around the trade war have hurt businesses and weighed on the global economy.

What tariffs have been imposed?

Washington delivered three rounds of tariffs in 2018, and a fourth one in September last year. The most recent round targeted Chinese imports, from meat to musical instruments, with a 15% duty.

Beijing hit back with tariffs ranging from 5% to 25% on US goods. 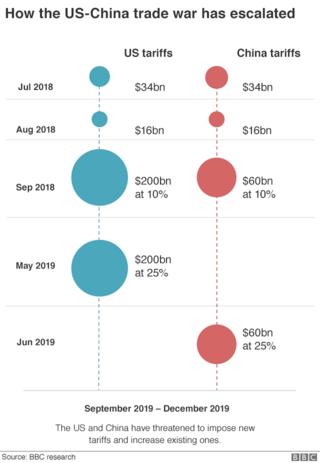 Under the so-called “phase one” deal signed in January, China pledged to boost US imports by $200bn above 2017 levels and strengthen intellectual property rules.

The US agreed to halve some of the new tariffs it had imposed on China.

The White House said it will tackle additional issues in a second, “phase two” deal but analysts said they didn’t expect anything concrete anytime soon.