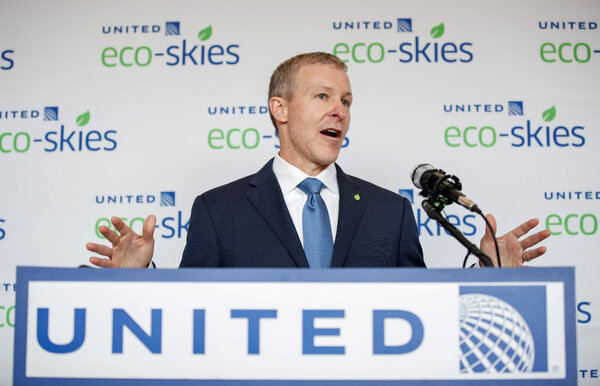 The chief executive of United Airlines told the company’s employees this week that the carrier — and other businesses — could make the coronavirus vaccine mandatory for all workers.

“The worst thing that I believe I will ever do in my career is the letters that I have written to the surviving family members of co-workers that we have lost to the coronavirus,” the executive, Scott Kirby told employees at a virtual town hall on Thursday, according to a transcript of the remarks. “And so, for me, because I have confidence in the safety of the vaccine — and I recognize it’s controversial — I think the right thing to do is for United Airlines, and for other companies, to require the vaccines and to make them mandatory.”

Some states, such as New York, have already made the vaccine available to flight attendants, pilots and other airline and airport employees. United has encouraged employees to get the vaccine as soon as they can.

Mr. Kirby’s comments, first reported by CNBC, do not reflect actual corporate policy. The airline would need to overcome logistical hurdles before requiring its tens of thousands of employees to get vaccinated and would need other businesses to join it in requiring vaccination, he said.

A spokesman for Delta Air Lines declined to comment on whether it will require the vaccine, but said the carrier is advocating that flight crews are considered essential workers for the purposes of vaccine distribution. American Airlines said on Thursday that it is encouraging its employees to get the vaccine, but won’t require it unless necessary for employees who fly to destinations where it is mandated.

Over the past week, only about 700,000 people have passed through federal airport checkpoints each day, about 35 percent of last year’s levels, according to Transportation Security Administration data. The airline industry’s recovery rests on the widespread distribution of the vaccine.