LONDON — At the Crooked Well, a neighborhood pub in south London that prides itself on its food, the Christmas menu is already decided. There will be venison and beef stews. But whether the stews will actually be served is another question.

Under a new lockdown planned to last a month, pubs in England have closed again. From Nov. 5 to Dec. 2, restaurants, gyms and nonessential shops are being shuttered by the government’s efforts to suppress a second wave of the coronavirus pandemic.

Britain’s first lockdown lasted more than three months, followed by an ever-changing array of restrictions since. No one knows how long this lockdown will really last.

The two nights before it took hold, “we were crazy busy, it was like the whole of London was out,” said Hector Skinner, one of the owners and the manager of the Crooked Well. “Now, I don’t know. I really don’t know. I feel like it’s going to go on for longer.”

Prime Minister Boris Johnson tried to sell the new lockdown to pandemic-weary Britons by saying it would, hopefully, allow families to be together over the holidays. But, he conceded, “Christmas is going to be different this year, very different.”

And that’s the problem for the hospitality industry, which fears losing out on a crucial month. Some 20 to 30 percent of a year’s revenue is made around Christmas and the holidays, according to the British Beer and Pub Association. At the Crooked Well, a good week in December would bring in double the best week in the summer.

If pubs can’t reopen in December, “then these businesses won’t survive January and February, which are like graveyard months for us,” said Emma McClarkin, the chief executive of the industry trade group, which represents about 20,000 pubs. 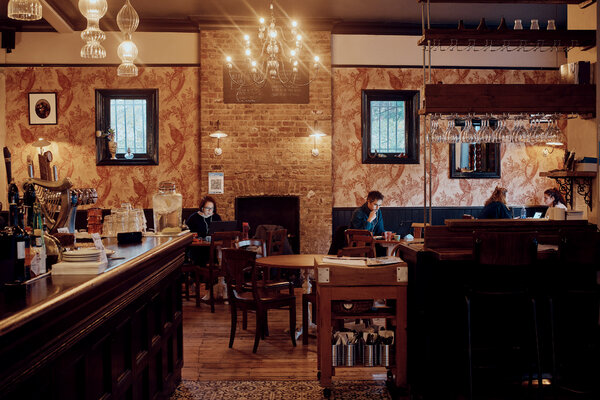 Britain’s pubs have been whipped around by the government’s attempts to, on the one hand, curtail the pandemic and, on the other, bolster an economic recovery.

When the virus swept through Britain in March and April, filling hospital beds and killing thousands, a lockdown shutting schools, offices and nonessential shops was accepted with stoicism. But the pub closings caused the most gloom. It was the first outright closing in their history. Describing the move as “extraordinary,” Mr. Johnson said it took away “the ancient inalienable right of freeborn people of the United Kingdom to go to the pub.”

In those early days of the pandemic, there was a point when Mr. Skinner and his co-owner, Matt Green-Armytage, figured their business was only a month away from folding. They asked family members for financial support, laid off some staff and eventually opened a BBQ takeaway service at the Crooked Well. That kept some money coming in until they were allowed to reopen.

Then came a boom. In August, the government encouraged people to leave their houses and go out to eat, offering to pay up to half-off their meals in pubs and restaurants. By 8 on the first night of the “Eat Out to Help Out” discount, the Crooked Well had run out of food.

While revenues have yo-yoed, some pubs came up with a new pitch to get customers through the door: They became work spaces. For a set price, officeless office workers sick of working from home could rent a table.

At the Crooked Well, during the day when the pub used to be closed, there was unlimited tea and coffee, a breakfast and lunch service, three different Wi-Fi networks to ensure the best connection, and a pint of beer or a glass of wine to mark the end of the workday, all for just 15 pounds a day.

The new service was a success. Some customers chose to set up their laptops basking in the natural light of the Victorian building’s large windows, or in corners under warm lamp lights. There was soft music, a quiet hush and strong coffee.

Last month, Young’s added a booking option for working from 11 of its locations in London, offering charging points, internet, sustenance and the odd printer for between £10 and £20 a day. Fuller’s, which owns more than 200 pubs in Britain, just began to roll out its “work from pub” offering.

At the Euston Flyer, a Fuller’s pub near its namesake train station, Jerry Magloire, the manager, was working out the pricing in late October for his “work from pub” plan. He was ready to try anything to increase the number of customers, he said. A week later, Mr. Magloire was back on furlough.

The second lockdown isn’t expected to be as economically painful as the first one. For one, it’s less strict. Pubs and restaurants can stay open this time for takeout, and after a government U-turn, that includes alcohol.

That doesn’t mean they will. Fuller’s has decided to shut all their pubs throughout this lockdown. “The experience that you get in that pub doesn’t necessarily lend itself to takeaway,” said Jane Jones, the company’s marketing director. Instead they are focused on reopening in time for the holidays: Turkeys have been ordered, and pubs have been asked to buy Christmas trees from local sellers.

Mr. Johnson has said that when the lockdown ends, England will return to the three-tiered system of local restrictions, with the third tier the strictest. “Tier 3 is a nightmare for us,” Mr. Skinner said, because different households can’t socialize.

Fuller’s shared that sentiment. Leaving lockdown for Tier 3 wouldn’t be good, especially because pubs that don’t serve “substantial meals” have to close. “It’s such an important part of our trading year, we have to be open for Christmas,” Ms. Jones added.

The Crooked Well has been shoring up its finances with a small-business grant, a government-backed loan and a cut in business taxes. It also began a crowdfunding campaign in September, raising £21,000 in 28 days. Some of the money will go toward awnings and outdoor heaters to fend off the rainy and windswept British winter. More important, it will pay for a lawyer to help the pub’s owners prepare for a review of their rent with their landlord in January.

“We have a very aggressive landlord,” Mr. Skinner said. The landlord, he said, has warned the pub against seeking protection under a moratorium that bars eviction from commercial properties for unpaid rent, a government benefit to help renters during the pandemic that has been extended twice to the end of the year.

During lockdown, the pub will open only on Sundays to sell boxes with large shareable meals, ranging from £38 for a whole roasted chicken with all the trimmings to £120 for a leg of lamb that will serve a whole table and have plenty of leftovers for the week.

And there’s a financial cushion thanks to the extra revenue brought in over summer and fall from the work-space initiative and a refurbishment of the upstairs event space into a second dining room with eight tables. The staff has been furloughed after the government extended the wage-subsidy program. But Mr. Skinner is still worried about the rent.

“We put ourselves in quite a good financial position, but the rent isn’t going to go away,” he said. If the lockdown lasts only a month, “we can handle it,” he added. “But if it continues for longer and longer, then things really do start to get scary and bleak again.”