WASHINGTON (Reuters) – President Donald Trump laid out new guidelines on Thursday for U.S. states to emerge from a coronavirus shutdown in a staggered, three-stage approach meant to revive the U.S. economy even as the country continues to fight the pandemic.

The recommendations call on states to show a “downward trajectory” of COVID-19 cases or positive tests for the disease over 14 days before proceeding with the plan, which gradually loosens restrictions on businesses that have been shuttered to blunt the spread of the virus.

“We are not opening all at once, but one careful step at a time,” Trump told reporters at the White House. The president had said earlier this month he wanted to reopen the economy with a “big bang.”

The plan is a set of recommendations for state governors, not orders. In that sense, it represents a backdown by Trump, who on Monday insisted he had total authority to direct states to re-open or remain closed. The responsibility for such decisions lies with state, not federal, authorities.

With the onus on governors, the plan also gives Trump political cover if not everything goes well. The president, a Republican who is running for re-election in November, has faced criticism for downplaying the seriousness of the virus in the early weeks of the outbreak.

“This isn’t a plan. It’s barely a powerpoint,” he said on Twitter, noting it did not include provisions to ramp up testing or set a specific standard for levels of the disease before economic opening.

Democrats such as House Speaker Nancy Pelosi and Biden said testing was key to opening the country and criticized Trump’s presentation for lacking specifics.

“I wouldn’t call it a plan. I think what he’s done, he’s kind of punted,” Biden said in an interview on CNN.

The new guidelines effectively end, at least for some states, the 30-day federal virus mitigation rules that were meant to stay in place through the end of April. States that have met the criteria can move into the first phase of re-opening on Friday, Trump said. Some 29 states would be in a position to re-open soon, he said. 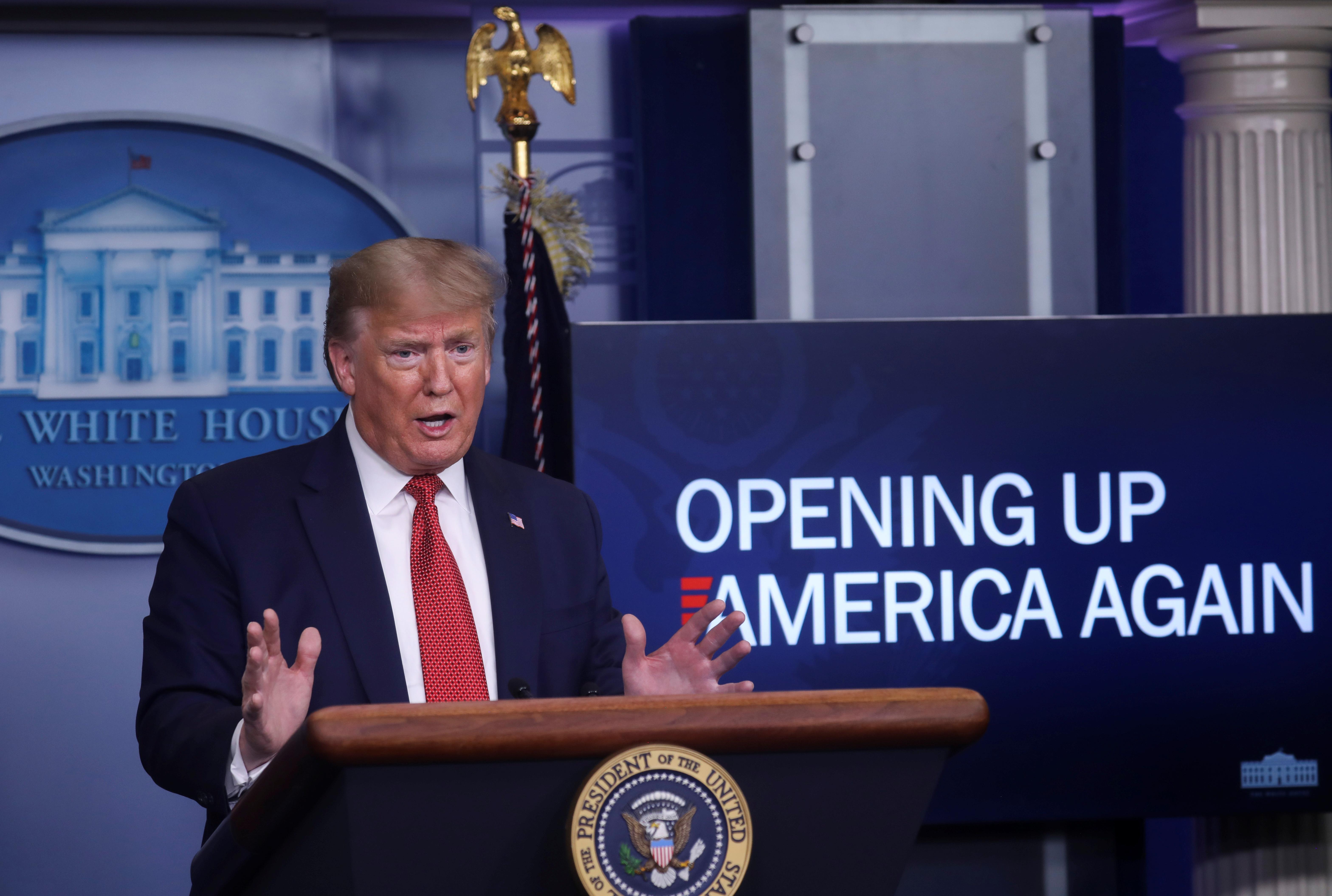 States should have the ability to set up screening and testing sites for people with symptoms and as well as contact tracing capabilities, and healthcare facilities should be able to supply personal protective gear independently and handle surges if COVID-19 cases increase again.

In the first phase of re-opening, the guidelines say groups of more than 10 people should be avoided if appropriate distancing measures are not practical. Non-essential travel should be minimized, telework should be encouraged, and common areas in offices closed.

Schools remain closed in phase 1, but large venues such as movies theaters, restaurants, sports stadiums, and places of worship can open with “strict physical distancing protocols.”

Hospitals, which have been hit hard by the health crisis, may resume out-patient elective surgeries and gyms can re-open with new protocols. Bars should remain closed, it said.

In the second phase, applicable to states and regions with “no evidence of a rebound” in cases, the guidelines recommend groups of more than 50 be avoided where social distancing is not practical. Non-essential travel can resume, while schools and youth camps can reconvene and bars with “diminished standing-room occupancy” may re-open. Hospitals may also resume in-patient elective surgeries. Such procedures are critical to hospitals’ income.

Phase three includes unrestricted staffing of workplaces, but Dr. Deborah Birx, the coordinator of the White House coronavirus task force who took a lead role in designing the guidelines, said that a “new normal” would remain in place: a need for higher hygiene standards and more space between people to prevent asymptomatic spread of the virus.

White House officials made a point of highlighting the support of Birx, infectious disease expert Anthony Fauci and Robert Redfield, director of the Centers for Disease Control and Prevention, for the plan. Trump thanked them repeatedly from the White House podium. 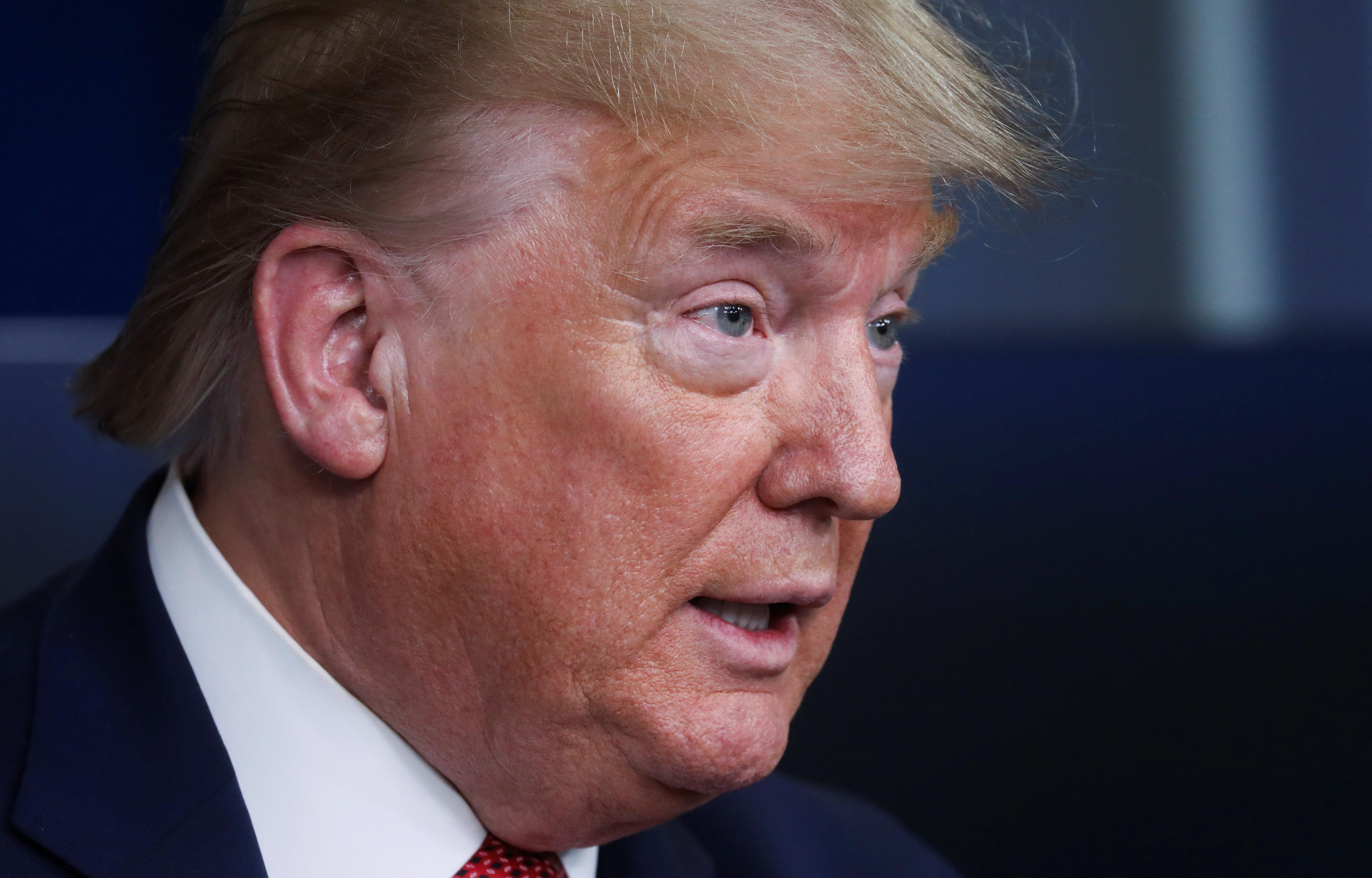 Trump has been pushing to get the U.S. economy going again after the coronavirus shutdown left millions of Americans jobless. More than 20 million people have filed for unemployment in the U.S. in the past month and over 90% of the country have been under stay-at-home orders.

“A prolonged lockdown combined with a forced economic depression would inflict an immense and wide-ranging toll on public health,” Trump said, adding it could lead to a sharp rise in drug abuse, alcohol abuse, suicide, and heart disease.