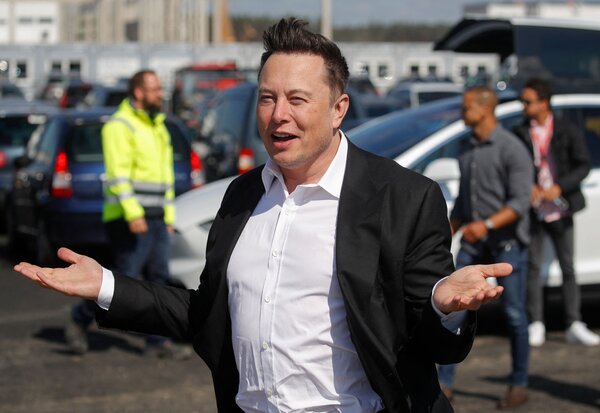 Much has been written about Carson Block, the volatile and sometimes venomous short-seller who runs Muddy Waters Capital. Now, Block is penning some rare words of his own.

Block just sent clients his first shareholder letter since starting a hedge fund in 2015. In the letter, obtained by DealBook from a source familiar with the fund, Block, a longtime critic of Elon Musk, Tesla’s C.E.O., said that his firm’s multiyear bet against the electric carmaker had been sent to “heaven,” with no plans to revive it.

Block said Musk’s “narcissism” drew his disdain and stoked the belief that Tesla’s business would crater. But Block added that he underestimated Musk’s ability to raise capital in huge amounts, reinvent himself and captivate shareholders.

“The market cap, the luster, the élan of Elon, is still there,” Block wrote, in explaining why his bets against Tesla have gone away.

“Tesla shorts have focused on Tesla’s lack of scale to compete in EVs with GM, Ford, VW, etc.,” Block wrote. “They are correct in that lack of scale would have been the death of Tesla. But they were looking at the wrong scale. Tesla is here not because it has scale in terms of manufacturing base or unit sales. It has scale because of its capital base,” he said of Tesla’s $700 billion market cap. He added:

One could look at Tesla’s market cap and think it’s fragile — that reality will shatter it. However, Tesla should be able to raise many billions before its cap becomes sub-scale — and keep in mind that Tesla equity raises tend to push the stock higher. (Those “dumb money” investors actually knew that capital base scale is what mattered all along.)

Negative publicity about short-sellers during the meme stock rally has cost hedge funds, Block wrote. His firm’s latest fund, which launched in February, raised only $30 million, or less than half of what he expected, because the “carnage spooked some investors.” Nonetheless, the fund is up nearly 11 percent since it started, at a time when the market has been rising, which aren’t conducive conditions for outspoken short-sellers.

Regulators are set to authorize a coronavirus vaccine booster shot. The expected move by the F.D.A. would expand the emergency use of the Pfizer-BioNTech and Moderna vaccines for people with weakened immune systems. It comes as a new study found that two-dose regimens of the vaccines were somewhat less effective against the Delta variant, which is responsible for a rise in so-called breakthrough infections.

Southwest warns of the effect of the Delta variant on bookings. The airline said yesterday that it no longer expected to turn a profit in the current quarter, a turnaround from a few weeks ago when it and other airlines said that business was booming.

Signs emerge that inflation might be moderating. The latest data showed that prices were rising much faster than before the pandemic, but month-to-month gains were cooling. Still, the cost of cars, vacations and other things continued to increase sharply. And the price of a latte may soon jump, too, as the supply of coffee beans dries up because of supply chain bottlenecks and extreme weather.

Reddit is now worth more than $10 billion. The online discussion forum has raised $410 million in a new funding round, led by Fidelity, at a significantly higher valuation than only six months ago, when it was valued at $6 billion. The new money gives the site, which has more than 50 million daily visitors, more time to decide when to go public, its C.E.O. told The Times.

China doubles down on reining in big business. The government’s latest five-year plan aims to tighten regulation of technology, national security and monopolies. As the crackdown has targeted Chinese companies with U.S. listings, the C.E.O. of Hong Kong’s stock exchange said a record number of companies had applied for I.P.O.s in the city.

The budget, which aims to transform social policy in America, is still far from official, and the challenges to passing it became clear almost immediately, with the moderate Democratic Senator Joe Manchin saying he had “serious concerns” about spending so much.

In the meeting, Harris is expected to emphasize that affordable care is a concern for both families and companies, DealBook hears.

What the White House is asking for: The Biden administration’s agenda on child care includes extending the enhanced tax credit to parents offered as part of the American Rescue Plan, which researchers say could cut child poverty by 45 percent. It also calls for expanding various forms of paid leave, up to an eventual total of 12 weeks per year for parental, family care and medical leave, as well as three days of bereavement per year.

Child care has become a major business issue, made more urgent as 2.5 million women have left the work force since the beginning of the pandemic. Companies, already facing difficulties filling open positions, have struggled to bring them back. The share of women in paid work is now at the lowest level since 1986.

The U.S. is the only member of the O.E.C.D. club of rich countries that does not have statutory paid leave for new parents. Today, roughly 300 business leaders from companies like Salesforce and Spotify called for federal paid family leave. In a letter, they said that paid leave “leads to better retention, personal health, and improved morale, which contributes to greater stability and viability for our businesses, ultimately helping our bottom line.”

“She didn’t mess around, and neither do I. We both get down to business and chop wood.”

— James Patterson, the thriller writer, on his unexpected collaboration with the country music star Dolly Parton. They are working together on a novel, which will be published in March alongside a new album of songs inspired by the book, in a deal that Little, Brown expects to be a blockbuster.

Joby flies into the market

Joby, the electric air taxi company that announced a $6.6 billion merger with Reid Hoffman’s SPAC in February, began trading as a public company yesterday. (It took one of its aircraft to the N.Y.S.E. to mark the occasion.) The firm is just one of a number of flying taxi companies that has announced deals with SPACs, which also include Archer, Lilium and Vertical Aerospace.

DealBook spoke with Joby’s executive chairman, Paul Sciarra, and C.E.O., JoeBen Bevirt, about their journey to the public markets — and what lies ahead.

On lessons learned from the SPAC process:

Because the SPAC’s share price was trading below its offer price when the merger with Joby went to a shareholder vote last week, more than 60 percent of investors opted to redeem their shares, leaving a smaller pot of cash for Joby to tap when the deal was sealed. (Redemptions are rising across the SPAC world.)

“There were certainly redemptions in the transaction,” Sciarra said. “But that’s OK, right? We wanted to make sure that we had investors that were excited about participating in this company’s journey over the next stretch.” Despite the redemptions, Joby raised more than $1 billion in the deal, with outside investment alongside the SPAC provided by Uber and others. Its shares jumped more than 30 percent on its first day of trading.

On what’s next for flying taxis:

Joby is seeking F.A.A. regulatory approval and signed a partnership with a parking garage operator to build a network of “vertiports” in New York, Los Angeles and elsewhere. It is scouting out “the most valuable takeoff and landing locations that we can build,” Bevirt said.

He added that another “critical” factor for companies like Joby, which plans for five-seater air taxis to whiz around the skies of major cities, is noise: Bevirt recently posted a video measuring the decibel levels of its aircraft at takeoff, which he said compares favorably with helicopters, the company’s main competition.

Mailchimp, the email marketer and ubiquitous podcast advertiser, is reportedly exploring a sale at a $10 billion valuation. (Bloomberg)

DoorDash held talks to buy Instacart, but the deal to merge the two food delivery companies fell apart. (The Information)

Senator Rand Paul disclosed that his wife bought stock in Gilead Sciences, which makes a drug to treat Covid, in February 2020. The filing was submitted 16 months late. (WaPo)

Regulators in California approved a plan to require solar panels and battery storage to be installed in many new commercial and residential buildings. (NYT)

A Discovery-owned TV station in Poland could lose its license after the country’s Parliament passed a contentious media bill. (NYT)

A Senate bill would significantly loosen control that Apple and Google have over developers who use the tech giants’ app stores. (The Verge)

McDonald’s pushed back its return-to-office date to October and said it would require U.S.-based officeworkers to be vaccinated and wear masks in most settings. (NYT)

The New York Stock Exchange said it would soon require anyone entering its famed trading floor to be fully vaccinated. (CNBC)

Amtrak employees have until November to get vaccinated, or take weekly coronavirus tests. California introduced a similar mandate for all teachers at public and private schools. (Bloomberg, NYT)

The case of “dog diaper” masks at a McDonald’s franchise in California has been settled. (NYT)

Facebook is rebuilding its ads to track less information about users. (Verge)

An asteroid the size of the Empire State Building may have a close brush with Earth — but not until the 2100s. (NYT)

The Times is introducing a group of newsletters exclusively for Times subscribers, including a lineup of new Opinion writers. Read more about the project, and sign up here.