Electric car maker Tesla has shrugged off the economic upheaval caused by the pandemic to report its fourth quarterly profit in a row.

The California company earned $104m (£82m) in the three months to 30 June, with the growth setting it on course for inclusion in the S&P 500.

That means Tesla’s shares, already surging, will see even more demand from investors who track the index.

The stock crested higher in after-hours trading on publication of the results.

Tesla said its bottom line was helped by salary cuts as well as the opening of its new factory in China, where costs are lower.

Boss Elon Musk said the firm is focused on growth, with other plants in the works, including one in Germany and a new one he announced would be located near Austin, Texas.

“I’ve never been more excited and optimistic about the future of Tesla in the history of the company,” Mr Musk said.

In the US, the pandemic forced boss Elon Musk to keep the company’s main factory in California closed until mid-May.

While the shutdown weighed on the firm’s output, it still beat analyst expectations.

But the overall resilience marks a contrast with rival car-makers, such as General Motors, many of which have reported sales declines of more than 30%.

Tesla said it still hoped to deliver on promises to make 500,000 vehicles this year.

“We have the capacity installed to exceed 500,000 vehicle deliveries this year, despite recent production interruptions,” the company said. “While achieving this goal has become more difficult, delivering half a million vehicles in 2020 remains our target.” 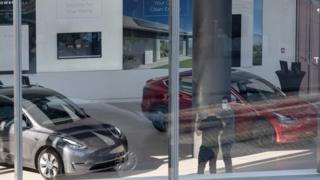 Tesla’s share price has nearly quadrupled since the start of the year, from $430 to more than $1,550.

The eye-popping increase has added to the long-running debate over Tesla, which many critics maintain is overvalued.

This month, the firm overtook Toyota as the world’s most valuable carmaker, with a market worth of almost $300bn – although the Japanese company sold about 30 times more cars last year.

Tesla had posted years of losses since its start. Achieving a fourth quarter in a row of profit makes it eligible for inclusion in the S&P 500, though its addition would have to be approved by the committee that governs the index.

Nicholas Hyett, equity analyst at Hargreaves Lansdown, said this could lead to a further rise in the share price, but he warned: “While questions about the group’s long term future may be a thing of the increasingly distant past its valuation remains a sore point for many.”

On 1 May, Mr Musk himself tweeted Tesla’s share price was too high. The rise puts him in line for another major payday and has helped propel him into the ranks of the world’s 10 richest people, according to billionaire rankings by Bloomberg and Forbes.