Supermarkets have gone on a hiring spree as demand surges as a result of the coronavirus crisis.

That move came before the government said it would pay the wages of workers at firms affected by the pandemic.

And Sainsbury’s has asked shoppers to stay 1m away from shop staff if possible, to help keep them safe.

Supermarkets have been overwhelmed by a wave of panic-buying as shoppers rush to stock up amid the coronavirus pandemic.

To combat the stockpiling, in recent days the major British supermarkets imposed limits on how much of each item shoppers can buy.

Along with other measures to cope with the increased demand, some of the chains have embarked on big recruitment drives for a total of more than 30,000 jobs. 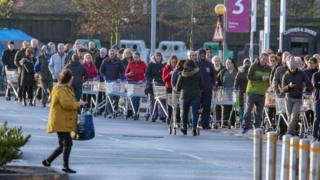 Tesco, the UK’s biggest supermarket, wants to take on 20,000 temporary workers “to help feed the nation”, it said.

“The Covid-19 pandemic has resulted in an unprecedented increase in demand for food and household products,” the chain said.

“At Tesco, we’re working around the clock to help ensure families have access to the shopping items they need.

“We launched our recruitment drive online on Wednesday and since then we have already been overwhelmed by support from the public and thank everyone who has applied to work with us in stores.”

It added that “over the coming days thousands of new colleagues will join us”.

The chain also announced on Saturday it will give all its workers across stores, distribution centres and customer engagement centres a 10% bonus on their hourly rate until 1 May – backdated to 9 March.

Frontline salaried managers will receive a 10% bonus on actual hours worked, it added.

Asda said it wanted to recruit more than 5,000 temporary staff from among people whose jobs have been impacted by the virus.

Aldi announced it was looking to fill 5,000 new temporary posts and take on 4,000 permanent new workers for jobs in all its stores and distribution centres.

And Lidl said it would create about 2,500 temporary jobs across its 800 stores in the UK.

The discounter said it was hiring to “help with an extremely busy time for stores”.

“Temporarily expanding our teams is one way we can help support our colleagues and customers, whilst providing work to those that have had their employment affected by the current situation.”

Earlier this week, Morrisons announced it was creating 3,500 new jobs to expand its home delivery service, about 2,500 pickers and drivers, plus 1,000 staff in its distribution centres.

It said it would make more slots available and also set up a call centre for those without access to online shopping.

Morrisons said the move would help “at a time of national need”.

As well as introducing social distancing measures, Sainsbury’s CEO Mike Coupe said the store would prefer customers to pay with a card rather than cash.

He also said Sainsbury’s would be expanding its reserved 08:00-09:00 slot for elderly, disabled and vulnerable customers to NHS and social care workers.

She said: “It’s not just about the risk to ourselves and our family; we’re travelling home on the Tube and on buses, we’re cross-infecting everybody at the moment.”

Former health secretary Jeremy Hunt told the programme he agreed the move by supermarkets could pose a risk.

He said: “We’re going to have to learn as we go along about these unintended consequences.”

On Friday, at his daily Downing Street briefing, Prime Minister Boris Johnson said he would be chairing a meeting with supermarket bosses on Saturday to discuss the situation.

In an environment that was already tough for the High Street due to higher costs and changes in shopping habits, the coronavirus crisis has added a huge burden for retailers as many people avoid their stores.

The company said it would focus on its digital and social platforms. Staff were to remain employees and receive their full pay for March, but it was not clear what would happen with staffing beyond then.

However, this news came before a massive UK intervention in which Chancellor Rishi Sunak will pay the wages of employees unable to work due to the coronavirus pandemic.

The radical move is aimed at protecting people’s jobs.

A number of travel operators have outlined measures they have been forced to bring in, due to the outbreak:

However, all these warnings and job cuts were made before the latest government announcement – and it is now unclear whether those moves will still hold.

As well as the wage payments, it is understood the government wage subsidy will apply to firms where bosses have already had to lay off workers due to the coronavirus, as long as they are brought back into the workforce and instead granted a leave of absence.