Chancellor Rishi Sunak is understood to be looking at options to replace the furlough scheme when it expires at the end of October.

The possibilities include a salary top-up scheme similar to those already operated by governments in France and Germany.

This would involve allowing firms to reduce employees’ hours while keeping them in a job, with the government paying part of the lost wages.

The German “Kurzarbeit” scheme and its French equivalent have attracted much attention in the UK from employers and trade unions alike, with both the CBI and the TUC in favour.

They fear unemployment could spike when the furlough scheme ends, as firms struggle to keep workers on the payroll.

On Tuesday, Bank of England governor Andrew Bailey called on the government to “stop and rethink” the furlough scheme, although he did not back any particular alternative.

What are the possible options? 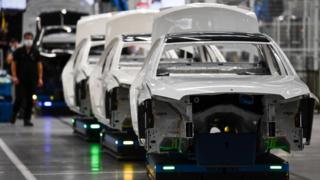 While there are fears that the cost of a replacement furlough scheme could damage the economy further, others argue that continued government support for jobs is needed to stop unemployment surging from November.

Advocates of a salary top-up scheme also point to the fact that both France and Germany have extended their schemes to run for the whole of next year.

A short-time working programme could also be cheaper than the furlough scheme, which guarantees 80% of employees’ wages up to a cap of £2,500 a month.

That scheme has cost £39.3bn so far, while the Germans estimate that the bill for Kurzarbeit during the pandemic will reach €33.5bn (£31bn) by the end of 2021, although that naturally depends on the progress of the pandemic.