Jamie Salter has made his active move at Authentic Brands Group — inking an up to 2.1 billion euro deal to buy Reebok from Adidas and reuniting the brand with star endorser Shaquille O’Neal, who has long wanted to own it.

And as much as that means big changes for Reebok, it’s a move that will also have a significant impact on ABG, which Salter leads as chairman and chief executive office.

Salter told WWD the purchase — which is four times larger than any other deal ABG has made — is expected to be the first brand using a new approach with the existing ABG operating model. Much like the company’s SPARC division, a 50-50 partnership with Simon Property Group, Reebok will do all the designing, contract with manufacturers to produce the line and then license retailers around the world to sell the product.

“We’re still not going to hold any inventory,” Salter said. “And we will control the distribution but instead of DTR [direct-to-retail], we eliminate the middleman. We will hand-select accounts at department stores, off-pricers and others, and then go narrow and deep with them. It will provide more margin for our wholesale and retail partners globally.”

He said that this mimics what is being done at SPARC, “but now we’re going to do it at ABG.” And this could be the first of many brands to ultimately join ABG in this way, Salter said. “We’ll be building a global design center for other brands, too, and we’ll be starting with Reebok.”

The Cape Makes A Return On The Runway

That global design center will be based at Reebok’s Boston headquarters, which will be retained — where it is led by vice president of creative direction Kerby Jean-Raymond — along with its “massive team,” which will help ABG navigate this new operating model. “We’re going to keep a very large team in Boston,” he said. Reebok president Matt O’Toole is expected to be key in the transition.

“It’ll be business as usual all over the world,” Salter said. “The stores, the internet and the customer are all staying intact. We’ll just be streamlining the process and will still deliver great product, but in a different way.”

He said over the next several months, Reebok will extricate itself from Adidas’ systems and join ABG’s platforms around the world after what he expects to be a “smooth transition.”

While Salter declined to comment on how the deal was structured, sources said the cash transaction will likely add up to $1.5 billion to $2 billion and that the deal has three components, covering the brand’s intellectual property, the working capital and an earn-out.

It’s a deal that resets the active game on several fronts, freeing Adidas to focus on its much bigger flagship business while giving licensing powerhouse ABG a big boost in the hot category, and just before its planned initial public offering this summer.

Adidas was toying with the idea of selling the struggling Reebok last year and made it official in February, putting the company on the block just before it unveiled its “Own the Game” strategy to boost sales and profitability.

The implication was that Adidas needed — or at least wanted to — drop Reebok from the team if it was to win.

But as Adidas vies for focus, Salter is playing a different and much broader game and, for now, winning in his own way.

ABG has become a voracious acquirer, scooping up rights to celebrity names from Marilyn Monroe to O’Neal, brands such as Nautica and Airwalk and retailers Forever 21, Brooks Brothers and Barneys New York, along with many others. On the activewear and sports side, ABG counts Sports Illustrated, Spyder, Greg Norman, Prince, Above the Rim, Hind and Volcom as among its properties.

Reebok will take the business to another level again.

“We’ve had our sights set on Reebok for many years, and we’re excited to finally bring this iconic brand into the fold,” Salter said in statement. “Reebok not only holds a special place in the minds and hearts of consumers around the world, but the brand also has expansive global distribution. Adidas has been an incredible steward of the Reebok brand, and we look forward to working with the Reebok team to continue their great work and further its position as one of the world’s leading consumer brands.” 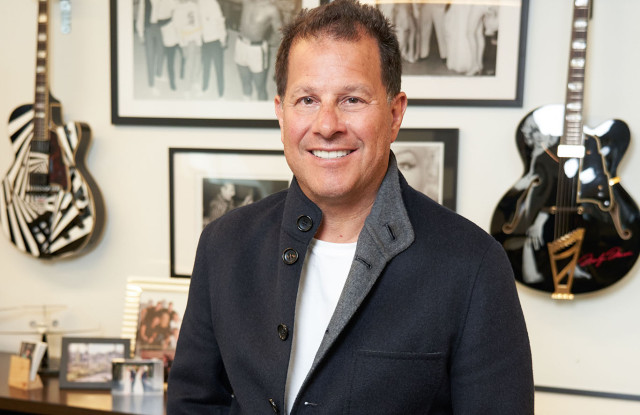 While ABG has long been interested in Reebok, it had competition as Advent International, Cerberus Capital Management, CVC Capital Partners and Sycamore Partners were all said to be buzzing around the brand as well.

One person familiar with the process described ABG’s successful bid as a come-from-behind victory.

Reebok operates in 80 countries and gets about 70 percent of its business from outside the U.S and Canada.

The international scope of the brand will both let ABG bring in new partners around the world as well as create overseas opportunities for its many other labels.

Forecaster Craig Johnson, president of Customer Growth Partners, said the brand has an opportunity to thrive in a new corporate structure.

“Reebok under the Adidas organization has always been a little bit of a stepchild,” said Johnson.

He said the market is led by the giants Nike and Adidas, followed by a series of “tier two” brands such as Reebook, but also Puma and Asics.

“Who’s hot of the tier-one brands? Nike is hot as ever and it’s one of the top two brands in the world alongside with Apple,” Johnson said, adding that Puma is the hot player of the smaller brands in the sector.

But while the other brands pushed to stay current, he said Reebok has been left behind.

“It’s become a yesterday brand and no one really knows what it stands for,” Johnson said. “What is its reason for being? That hasn’t been well defined in the Adidas organization. If you’re a Reebok brand lover or even just neutral on it, you like to see companies are doing new and interesting things to succeed. Reebok hasn’t been doing a lot of that.” 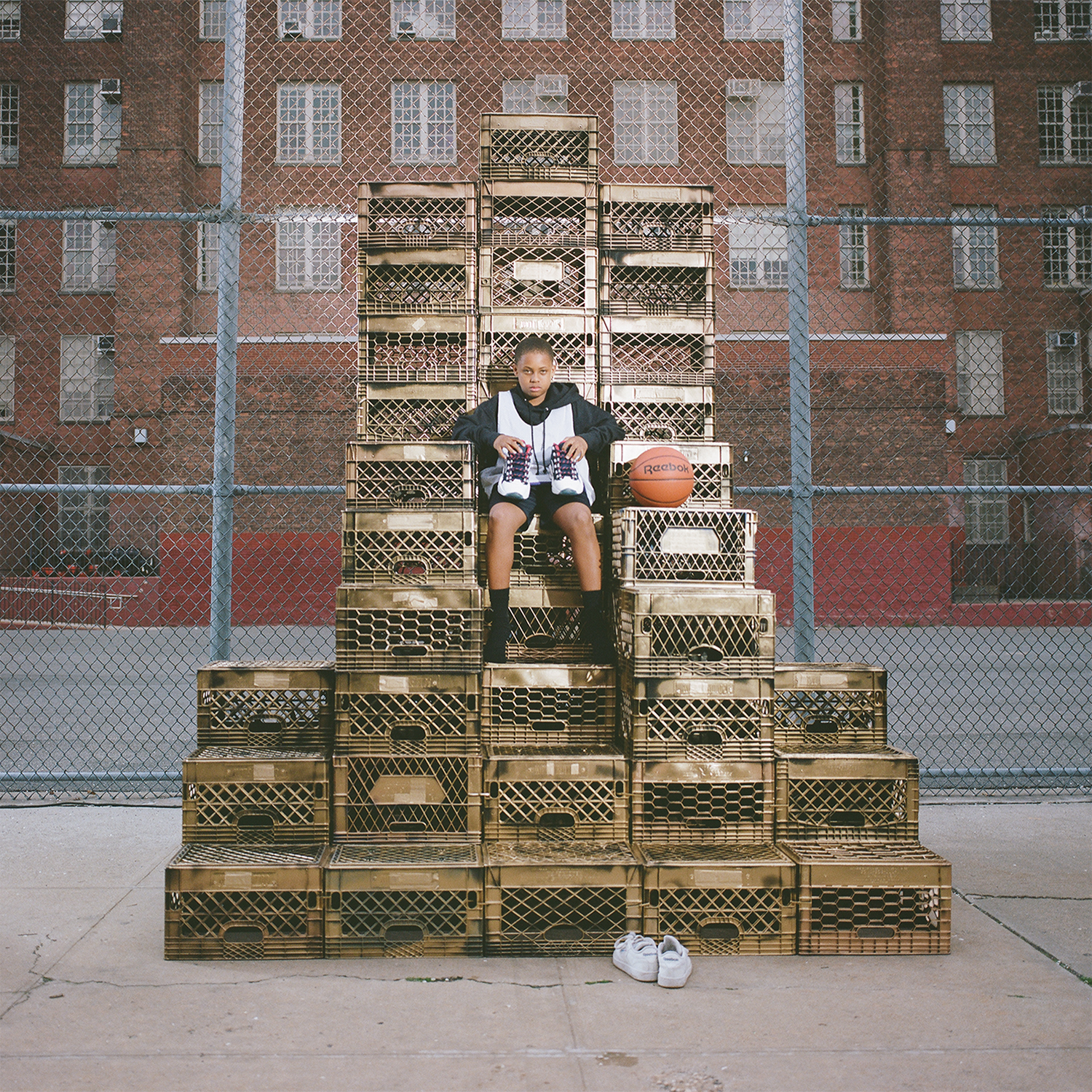 There have been some recent steps in that direction.

Buzzy designer Jean-Raymond was elevated to his role as vice president of creative direction. And the brand sprang for some big-name deals with Victoria Beckham, Cardi B, Ariana Grande and Gigi Hadid.

But ABG now has the opportunity to see that process through — and in its own style.

ABG said it “plans to employ its core playbook, connecting strong brands with best-in-class licensees and a network of partners that seek to optimize value in the marketplace. The brand’s world headquarters will remain in Boston and ABG will work closely with Adidas, Reebok’s president Matt O’Toole and the entire Reebok team to transition the brand to ABG’s platform.” Salter and crew plan to maintain the brand’s global footprint across retail, wholesale and e-commerce.

The brand still holds a special place in the hearts of many. 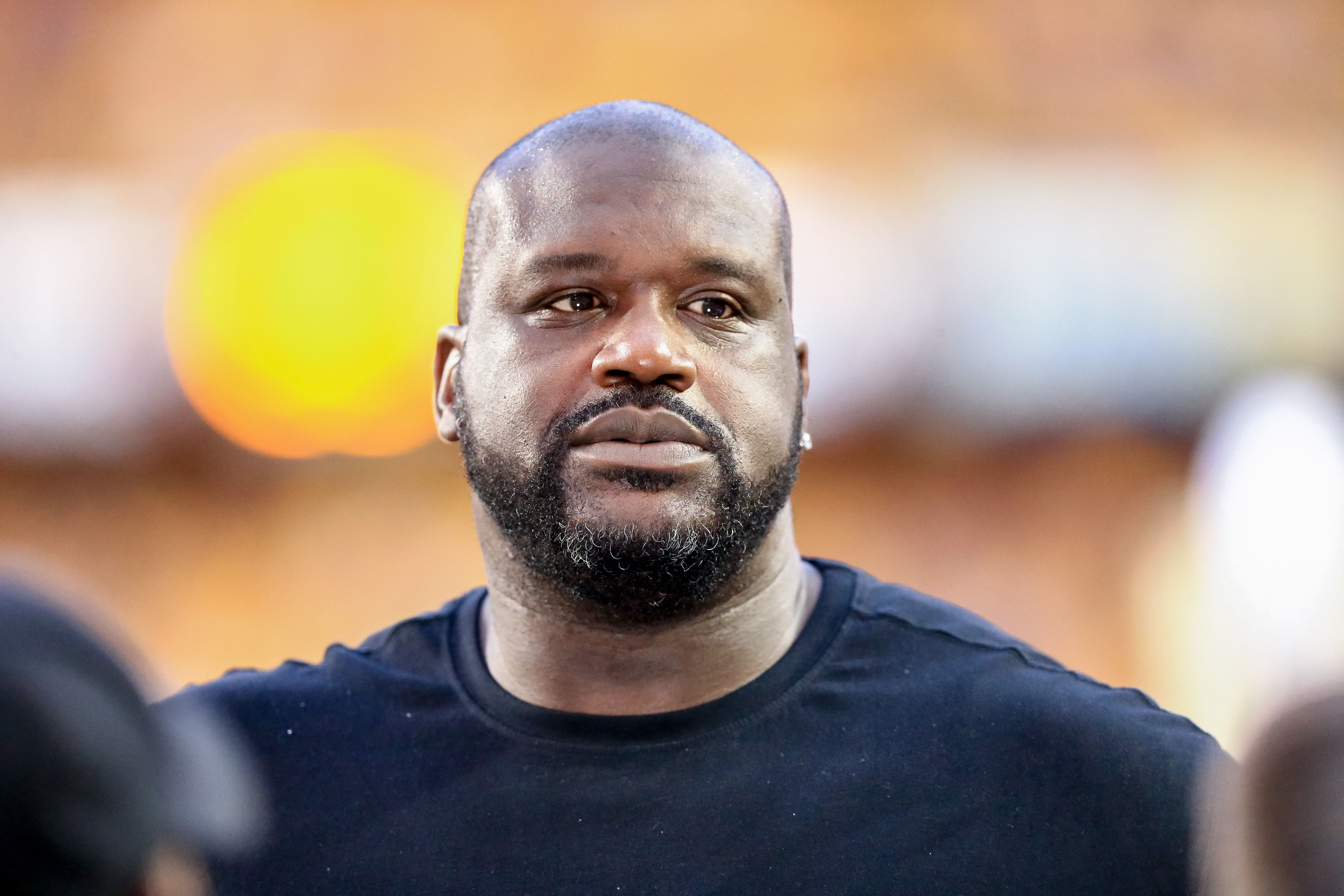 O’Neal said: “As a longtime partner of Reebok and an owner of ABG, it’s a dream come true to welcome this legendary brand to the family.”

The basketball star has suggested before that this was a possibility.

In 2019, the O’Neal told an interviewer, “I would love to buy Reebok,” well before the brand was known to be for sale. And now — 29 years after O’Neal was signed to endorse Reebok’s “Shaq Attaq” — he’s realized that dream, at least in some fashion.

Salter said O’Neal can “be as involved as he wants to be. He’s part owner of ABG and will be part owner of Reebok. He really has his ear to the ground and this is the brand he’s been dreaming of owning.”

The CEO also said there is no plan to make any immediate changes in Reebok’s roster of high-profile collaborators such as Ariana Grande, Cardi B and others. “All the contracts they have stay in place,” he said.

Going forward, Reebok will have some new, financially savvy types, on the team. ABG said its private equity backers BlackRock, General Atlantic and Leonard Green & Partners “played an instrumental role in this partnership.”

Kasper Rørsted, Adidas’ CEO, said: “Reebok has been a valued part of Adidas, and we are grateful for the contributions the brand and the team behind it have made to our company. With this change in ownership, we believe the Reebok brand will be well-positioned for long-term success. As for Adidas, we will continue to focus our efforts on executing our ‘Own the Game’ strategy that will enable us to grow in an attractive industry, gain market share, and create sustainable value for all of our stakeholders.” 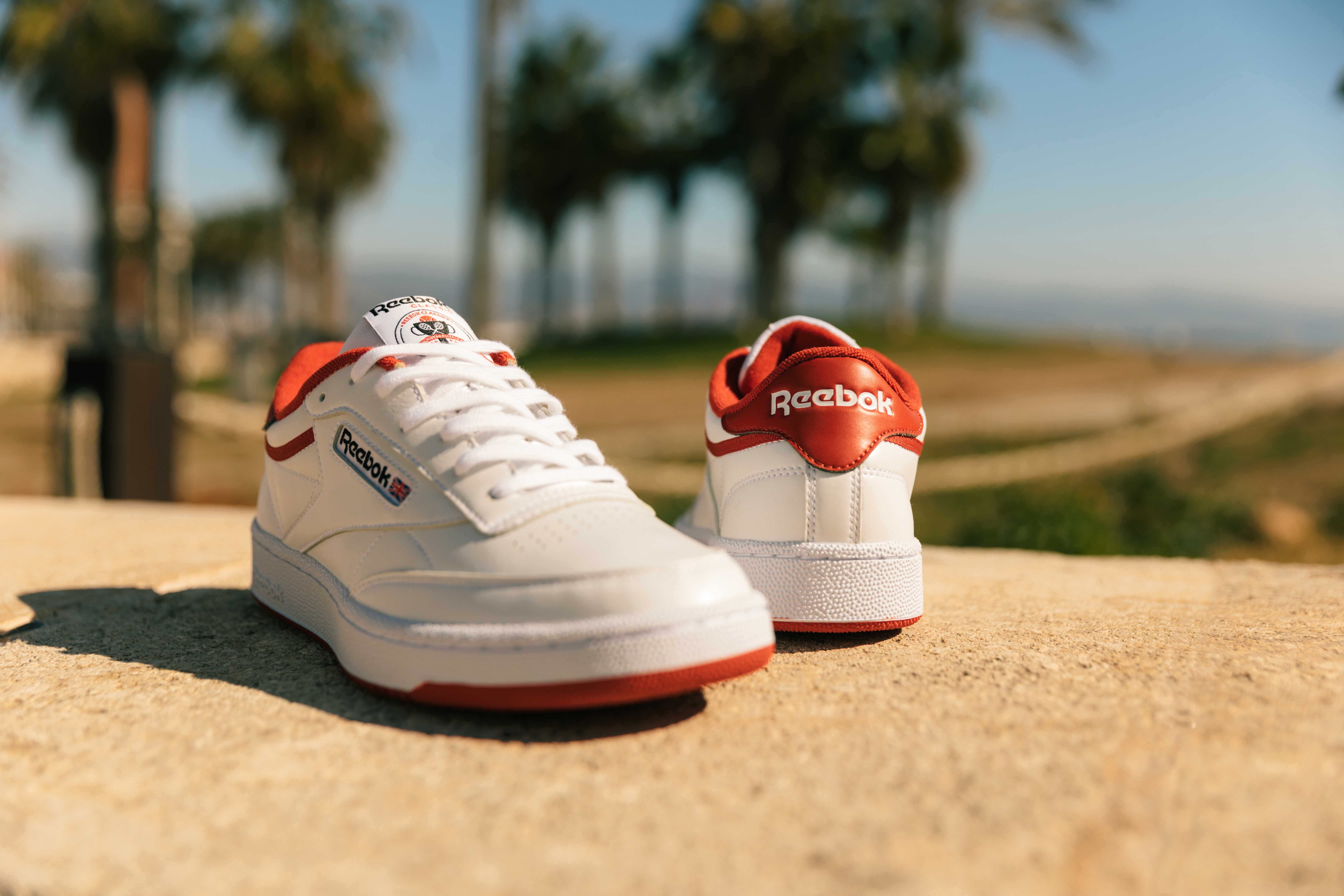 Adidas acquired Reebok in 2006 for $3.8 billion, which at the time included the Rockport, CCM Hockey and Greg Norman brands. Adidas later offloaded those brands.

Reebok has long been overshadowed by its parent company and has been a perennial underperformer even though results have improved recently. Reebok’s sales bounded 94 percent in the second quarter versus a year ago, and 13 percent above 2019 levels.

While Adidas clearly wants to focus on its main brand, it is also selling into what has become a very hot deal market, where investors of all sorts are looking anew at consumer companies and beyond the pandemic.

Companies are increasingly taking in lower interest rates and government stimulus, relatively strong consumer spending and business optimism that is transcending the Delta variant, and breaking away to make their move.

Joining ABG in their rush to the public market is a host of other brands and fashion companies. Rent the Runway and Warby Parker have both said they’re taking the plunge, while Allbirds and Fabletics are rumored to be. Ermenegildo Zegna Group is going public via a SPAC deal. And Foot Locker Inc. is shelling out $1.1 billion to bring two retailers, Atmos and WSS, into the fold.

Other players in the world of sports are also making their move.

Sports licensing giant and quick-turn jersey artist Fanatics scored an $18 billion valuation this month, raising more money from Jay-Z, Major League Baseball and others as it inched toward a broad focus that could also include sports betting. The company has said it could go public eventually.

Across the board, brands are doubling down on their direct-to-consumer plans, building on the e-commerce gains made during coronavirus lockdowns and building stronger relationships with the end consumer.

If the pandemic forced fashion to take a kind of half-time break to rework its strategy, the second half is about to start. And Reebok seems to be coming off the bench — with a whole different plan of attack.

James Reinhart Is Looking to Go Bigger at ThredUp