The Fed chief studiously avoided commenting on specific government policy proposals during three hours of wide-ranging testimony before the House Financial Services Committee. But he did acknowledge, in response to a question, that enabling better options for affordable child-care is an “area worth looking at” for Congress.

“Our peers, our competitors, advanced economy democracies, have a more built-up function for child care, and they wind up having substantially higher labor force participation for women,” Mr. Powell said, answering a question from Representative Cindy Axne, an Iowa Democrat. “We used to lead the world in female labor force participation, a quarter-century ago, and we no longer do. It may just be that those policies have put us behind.”

The Fed chair, who had also testified before the Senate Banking Committee on Tuesday, repeatedly refused to weigh in on the $1.9 trillion spending package the Biden administration has proposed or any of its individual provisions. The central bank is independent of politics, and it tries to avoid getting involved in partisan debates.

But Mr. Powell did voice qualified support for a few broader ideas — like exploring better child-care options — and he stressed that in the near-term, it is critical to help workers who have been displaced from their jobs during the pandemic. He made it clear that the labor market remained far from healed, that the pandemic’s economic fallout has disproportionately hurt women and minorities, and that both Congress and the central bank have a role to play in supporting vulnerable families until the economy has recovered more fully.

“Some parts of the economy have a long way to go,” he said Wednesday.

Women’s labor force participation had climbed for decades in the United States before stalling out — and then actually dropping slightly — starting in the 1990s. As Mr. Powell alluded to, adult women in the United States hold jobs or look for them at lower rates than women in some other major advanced economies, such as Canada or Germany.

Research has suggested that the divergence may be linked to child care policies. In a 2018 paper that asked why the share of Canadians who work or look for jobs had climbed even as United States labor force attachment had fallen, researchers at the Federal Reserve Bank of San Francisco pointed out that most of the gap owed to different outcomes for women. And they pointed to caregiving policy differences as a likely culprit.

While women lost jobs less dramatically than men during the 2009 recession, their employment rate is down by about as much as men’s during the pandemic crisis. And when it comes to labor force participation, which measures the share of people who are either working or looking, women have lost more ground.

Female participation dropped 2.1 percentage points to 55.7 percent in January, compared with February 2020, whereas men’s participation has dropped 1.7 points to 67.5 percent.

Mr. Powell noted the disproportionate impact on Wednesday, saying that “women have taken on more of the child-care duties than men have at a time when kids are going to be at home, they’re not going to be at school in many places.”

Throughout his tenure as Fed chair, Mr. Powell has been keenly focused on the job market. During the pandemic downturn, he has repeatedly said that both monetary and fiscal policymakers should support displaced workers so that they can make their way back into jobs when the economy reopens.

While the Fed can help the economy and the job market to improve broadly, helping individual groups in a targeted way is generally left to elected officials, who can create more precise programs. That includes paving a clearer path to the labor market for mothers, which would mainly fall to Congress and the White House. 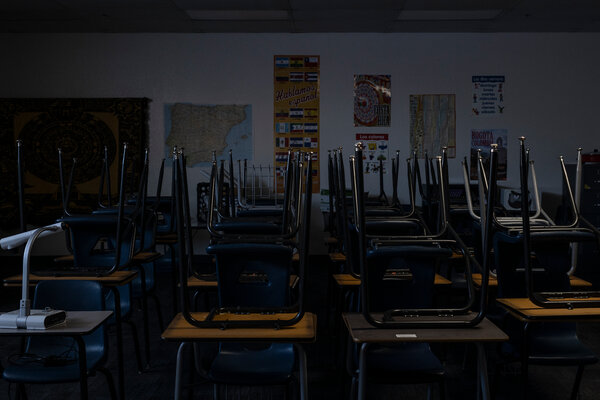 Still, the Fed can help to foster conditions for strong economic growth overall, which pulls people in the labor market and helps to set the stage for higher wages.

Officials are trying to do that by keeping interest rates low and buying large quantities of government-backed bonds in order to keep many types of credit cheap, policies that can fuel both lending and spending. The Fed’s explicit aim is to achieve both maximum employment and slow but steady inflation that averages 2 percent over time.

Mr. Powell signaled on Wednesday that interest rates, which have been at rock-bottom since March 2020, are likely to remain there for years to come. He also suggested that the Fed would be patient in slowing down its bond buying, waiting to see “substantial” further progress before changing that policy.

Mr. Powell has been pledging for the past 11 months that the Fed would use its policies to help the economy get through the pandemic, but his comments have become noteworthy at a time when some lawmakers — in particular Republicans — have become worried that big government spending could fuel economic overheating that leads to rapid inflation.

The Fed is tasked with keeping price gains under control. But its officials have been clear that weak price gains, not runaway ones, are the problem of the modern era. Central bankers try to keep price gains from slipping ever lower, because disinflation can be economically damaging.

“We live in a time when there are significant disinflationary pressures around the world,” he said, and so officials are trying to bolster prices. “We believe we can do it, we believe we will do it. It may take more than three years.”

The Fed tweaked its approach to monetary policy in 2020, saying that it would aim for periods of slightly higher inflation and that it would no longer seek to cool off the economy just because the unemployment rate was falling — an approach monetary policymakers had for decades embraced as prudent. Mr. Powell’s colleague, the Fed governor Lael Brainard, explained the thinking in remarks delivered to a Harvard economics course Wednesday morning.

“Removing accommodation preemptively as headline unemployment reaches low levels in anticipation of inflationary pressures that may not materialize may result in an unwarranted loss of opportunity for many Americans,” Ms. Brainard said. “It may curtail progress for racial and ethnic groups that have faced systemic challenges in the labor force.”

The Fed was relatively patient in lifting interest rates after the 2007 to 2009 recession — leaving them near zero until 2015 and then raising them slowly. As they proceeded cautiously and unemployment dropped to 50-year lows, workers who had been counted out began to re-enter the labor market and employers started to go to greater lengths to recruit and train talent.

“At very low levels of unemployment” the United States “saw benefits going to those at the lower end of the spectrum — which means disproportionately African Americans, other minorities, and women,” Mr. Powell said. “With our tools, what we can do, is try to get us back to that place.”