Since 1905, four generations of Quinns have delivered letters, packages and passengers to the islands of Penobscot Bay. A lost summer could sink the tradition.

HANCOCK COUNTY, MAINE — In blinding fog, an aging boat called the TM 2 zigzagged through the Cricket Hole, a shallow reef in Maine’s Penobscot Bay. The ocean’s calm surface concealed a maze of unseen ledges, around which the TM 2’s captain, Karl Osterby, cut a tight course. The boat soon approached an aluminum dock on Great Spruce Head Island, where a man in shorts and rubber boots awaited.

“Another busy day?” the man said, his sarcasm as evident — this being Maine — as the invisible bottom of the Cricket Hole. Mr. Osterby said nothing and held out an all but empty canvas bag of U.S. mail with one hand, as the TM 2 glided past the dock without stopping. There was a single passenger aboard (me). In the state that calls itself Vacationland, high season had just begun.

Normally, by July, the mail boat that serves six of the small and rugged islands of northern Penobscot Bay — Barred, Butter, Eagle, Bear, Scrag and Great Spruce Head — would be weighed down with letters and packages, plus a dozen or so passengers at $25 per ride. Some riders would have been sightseers scanning the reef-laden harbors for porpoises and harbor seals, and some would have been seasonal residents of the islands. Many in the latter group would be stranded without the mail boat — a lifeline delivering essentials like prescriptions, groceries and, this year, ballots. 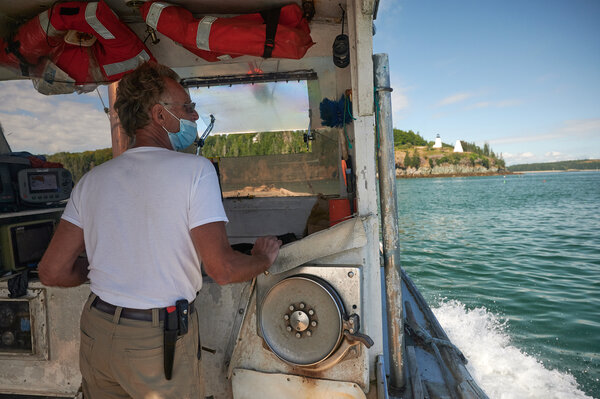 Operating the route has been the responsibility of one family since 1905 — and this year is likely to be the last because of the hardships imposed by Covid-19.

After departing Great Spruce Head, the TM 2 motored three miles to Eagle Island, where a member of that family, Treena Quinn, stood waiting on a 160-year-old wharf. A single mother and “sixth-generation island girl,” Ms. Quinn, 50, is the first woman in her family to run the mail boat. Her great-grandfather captained the route aboard a vessel known as the Merry Widow. Then a great-uncle took over, followed by her grandfather, then an “umpteenth cousin” and finally her father. Two relatives drowned delivering mail in the waters off Eagle, where the Quinn family has lived, at times alone, on a saltwater farm since approximately 1815.

At the Eagle Island dock, Ms. Quinn helped Mr. Osterby reload the TM 2, then watched as it vanished into the fog. “Poor Karl,” she said. “I haven’t been able to pay him all summer.”

Maine has the sixth-most tourism-dependent economy in the U.S., with nearly $6.5 billion in revenue from vacationers, and unlike other states relying on hospitality, such as Florida and Nevada, nearly everyone comes between June and September. Moreover, as those familiar with the state’s charms can attest, an outsized portion of Maine’s tourism industry is made up of small businesses.

However, Maine also has the oldest population in the country, with a median age of 45, and in April its governor, Janet Mills, issued some of the most rigorous travel restrictions in the United States, including a 14-day quarantine of visitors. On July 4, the unofficial start of tourist season, as the schooners sat in their docks and the seafood shacks did not run out of fried scallops before sunset, many worried that Maine was facing a particularly acute form of the economic catastrophe afflicting the rest of the country.