After 20 years of trying, Indianapolis finally landed the American Dental Association convention. Last December, the group agreed to gather there in 2026, promising Indianapolis tens of thousands of visitors and tens of millions of dollars for the local economy.

But there’s a catch: The dentists can back out if the convention center complex does not complete a $550 million expansion: 143,500 square feet of new event and ballroom space as well as two privately financed hotels.

That helps explain why, in the depths of a pandemic that has left many convention centers empty or repurposed into field hospitals or homeless shelters, a 25-member board in Indianapolis voted unanimously in September to add up to $155 million to the public debt.

“We see convention tourism racing back in 2023,” said Chris Gahl, senior vice president of Visit Indy, the nonprofit that markets the Indiana Convention Center and attractions like the Indianapolis Motor Speedway. “When the green flag drops, we’re going to be on the competitive edge.”

For decades, cities large and small have turned to gleaming convention centers and cavernous expo halls to revitalize downtown neighborhoods and perk up local economies. The pitch sounds like a win-win: Conventioneers — often traveling on the company dime — will fill hotels, pack restaurants and spend in stores. And the debt taken out to finance construction can be repaid with taxes targeted at the travelers, so locals don’t have to foot the bill.

Normally, there are more than a quarter-million conventions and trade shows in the United States each year, ranging from the huge CES technology trade show in Las Vegas to smaller expos for janitorial supplies or antique-toy enthusiasts. In 2016, those events drew 84.7 million people, who spent a total of $110.4 billion, according to the latest survey by the Events Industry Council. The economic impact of these events can vary widely, however, depending on their size and whether they draw big-spending international visitors.

To keep its slate of shows — and steal others from rival cites — a convention center must frequently upgrade, expand or remodel. And the arms race keeps accelerating, even with most experts predicting that it could be at least two more years before attendance fully bounces back from the coronavirus pandemic.

“This is a perverse world, where market realities do not affect city decision-making,” said Heywood T. Sanders, a professor at the University of Texas at San Antonio who studies the use of convention centers as urban-renewal tools.

The financial wounds caused by the pandemic have been grievous. In Irving, Texas, the public finance authority behind a year-old convention-center hotel has already defaulted on $37 million of municipal bonds. In Seattle, one plan to finance an expansion failed to meet a legal requirement because hotel-tax revenues have dried up. And in Milwaukee, the pandemic threatened to throw the downtown Wisconsin Center into insolvency. 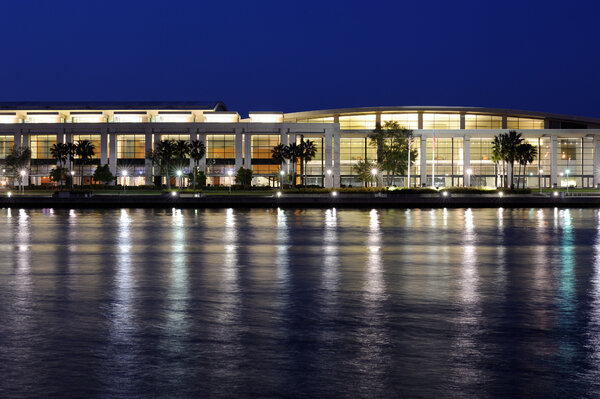 But none of that has slowed a building spree meant to attract hordes of middle managers, car aficionados and coin collectors.

Georgia budgeted $70 million in July to help Savannah double its convention center’s exhibition hall. In Cleveland, officials are seeking $30 million to upgrade an underused health technology center and add it onto the Huntington Convention Center. And in Terre Haute, Ind., where the foundation for a $32 million convention center is half poured, the county Capital Improvement Board just began working on a plan for a $20 million hotel nearby.

If anything, fewer events have made the competition more intense: The Indianapolis center upgraded its cleaning and air filtration systems this year and poached six basketball tournaments and a candy trade show — the Snacks & Sweets Expo — away from Chicago, where conventions remain forbidden.

“It’s all about putting heads in beds,” said Marty Brooks, the chief executive of the Wisconsin Center, which borrowed $270 million this summer for work intended to meet the demands of the discerning conventioneer: open spaces, pop-up meeting rooms and panoramic windows. Without those improvements, Mr. Brooks said, Milwaukee would lose ground to cities like St. Louis, Nashville, Louisville and Indianapolis.

At the time, the Wisconsin Center was a few months from defaulting on $150 million in debt. But here, the economic destruction of the coronavirus actually helped. The Federal Reserve has cut already low interest rates to rock-bottom levels, so the center could not only stave off a default by refinancing but could borrow even more.

Low borrowing costs have been a lifeline for the Greater Columbus Convention Center in Ohio, which lost events like the North American Bridge Championships and “The Arnold” — the Arnold Fitness Expo, a trade show for bodybuilding equipment, workout clothing and vitamin supplements. The event, named for Arnold Schwarzenegger, is the center’s biggest of the year. With an associated bodybuilding competition, which went on this year but barred most spectators, the event normally draws 200,000 people and fills 18,000 hotel rooms.

In September, the center refinanced roughly $202 million of debt, including for a 28-story hotel tower now under construction and a 2014 overhaul that expanded the center’s event space, upgraded its furnishings and added a glass atrium.

“We were trying to take advantage of lower interest rates,” said Don Brown, the chief executive of the Franklin County Convention Facilities Authority, which owns the Columbus center. “Second, we were trying to deal with the impact of the pandemic on our primary revenue streams, which are hotel occupancy taxes.”

Right now, the center is hosting events that don’t produce much revenue: ad hoc traffic and eviction courts, along with a smattering of events like mock tailgate parties for Ohio State University home football games and a socially distanced screening of “The Rocky Horror Picture Show” on Halloween.

The loss of hotel-tax revenue has caused “a crisis” in Seattle, said Matt Griffin, a principal of the Pine Street Group, which is the developer of a $1.8 billion expansion underway at the Washington State Convention Center there. The center’s borrowing capacity is limited, by law, to the value of recent hotel-tax revenues. That meant the last round of borrowing to complete the work couldn’t go through.

“We need another $300 million of financing to finish this project, and if we don’t have a plan by the end of the year, we’re going to have to shut it down,” Mr. Griffin said. The assistance could come from the county or the city, he said, but more likely the state government.

“There’s various ways they could do it,” he said. “It’s not straightforward.”

Even in the best of times, convention centers are loss leaders, said Mr. Sanders, the Texas professor. But the convention business has faced severe boom-bust cycles over the past two decades, with steep downturns after the terrorist attacks of 2001, the financial meltdown of 2008 and now the pandemic.

On Tuesday, the organizer of BookExpo, the country’s largest publishing trade show, canceled the 2021 event and said it would rethink its format for the future, suggesting that it would include both “in-person and virtual offerings.” In recent years, BookExpo was held at the Jacob K. Javits Convention Center in Manhattan.

If enough events go away, local taxpayers could end up paying back debt that centers took on to expand, Mr. Sanders said. “You’ve made a very large bet in an environment of enormous risk and uncertainty,” he said. “And once you place it, you can’t undo it.”

And that drives cities to keep building. Consider the chain reaction caused when the National FFA Organization sought greener pastures.

The group, once known as the Future Farmers of America, is prized for the tens of thousands of conscientious teenagers it brings to town. After 1998, it spurned Kansas City, Mo., its host city for 70 years, despite offers of cash, a free building and other incentives. The FFA was growing fast, and Kansas City wasn’t keeping up: Event space was tight, and local hotels sold out, forcing some teenagers to sleep 60 miles away in Topeka, Kan.

The group decamped to Louisville, Ky., where the fairgrounds were expansive. But soon the hotel crunch was even worse: Some attendees were booking rooms 90 miles away. That was when Indianapolis pounced, landing the 2006 convention with the promise of more hotel rooms and donations from local businesses to hold down registration fees.

But no sooner did Indianapolis bag the future farmers than it lost the Performance Racing Industry Trade Show, which took its business to Orlando, Fla. — where there was more space.

“This isn’t Chicken Little,” Fred Glass, then the president of Indianapolis’s Capital Improvement Board, said at the time. “The sky really is falling. We’re in danger of losing all of our large convention customers.”

So Indianapolis set to work on its fifth expansion since the center opened in 1972. When it was done in 2011, Performance Racing came back. But by 2017, another big client, Gen Con, was bursting at the seams. Up to 70,000 tabletop gaming enthusiasts descend on Indianapolis for four days of Dungeons and Dragons, Magic: The Gathering, cosplay and more.

“We take over the convention center itself, the vast majority of hotel ballrooms downtown, and we’ve been moving into the football stadium as well,” said David Hoppe, Gen Con’s chief executive.

He told Visit Indy that the gamers might have to leave, and asked what the city could do to make them stay.