For half a century, the Mercedes-Benz S-class has been the brand’s flagship, hosting innovative technological, safety, design and engineering features that eventually trickle down through Mercedes’s lineup — and often throughout the auto industry as a whole. But starting 2012, Tesla arrived with a capital S of its own, and its Model S began to steal some swagger.

Tesla has had the luxury electric sedan market pretty much to itself for a decade. In that time, Tesla has sold well over 150,000 Model S vehicles, handily outselling the S-Class, and, according to Adam Chamberlain, vice president for sales at Mercedes-Benz North America, cannibalizing “about 5 percent” of S-Class customers.

This month, Mercedes unveiled its electric answer: the 2021 EQS, the first entry from Mercedes’s EQ sub-brand in the United States. “Simply, it’s the most significant launch of a Mercedes-Benz in decades, potentially ever,” Mr. Chamberlain said.

This is a notable declaration from the company that helped to invent the automobile back in the late 19th century. A recent test drive suggested the EQS is a revelation, worthy of the “Sonderklasse” (top-grade) moniker, and then some. The Germans should be able to win back some customers who drifted to Tesla, and hold onto the Tesla-curious.

Though the version I drove for a few hundred miles in and around New York City was spackled with eye-confounding camouflage, the first thing I noticed about the EQS was how slippery it looks. “That car has a drag coefficient of .20, which is a complete world record,” said the Mercedes head of global design, Gorden Wagener. These extreme aerodynamics contribute to the EQS’s estimated range — with the available 107.8-kilowatt-hour battery pack — of around 350 miles, near the high end of most available electrics. (Federal testing has not been completed yet.) 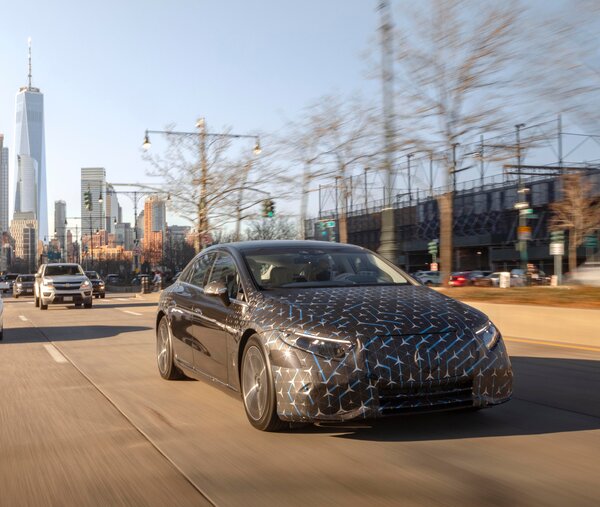 The design — engineered from scratch rather than simply trying to electrify the existing S-Class — is unencumbered by style conventions. With no internal-combustion engine, transmission, exhaust or gas tank to build around — but with a thick battery pack down low — the car assumes a more fluid, high-riding, hatchback profile. With a stubby hood, and its wheels pushed to the corners, it also has a larger cabin than the gasoline-powered S-Class, in a smaller footprint.

This unorthodox appearance allows Mercedes to make a clear visual statement — something of key importance to E.V. consumers.

“Nationwide, electric vehicles are still at just around 2 percent of annual sales,” said the E.V. industry analyst Chelsea Sexton, noting that the category of tech-forward, “early adopters” likely to be electric cars’ first buyers encompasses around 14 percent of total car buyers. “So we’re still going to be firmly in that territory for a while,” Ms. Sexton said. And these people want to be seen as distinctive for this choice. They want to know that someone’s going to notice it, and see it as an actual E.V.”

Those who get close enough to see, or sit in, the interior will definitely notice. Mercedes is the first manufacturer to offer a virtual screen that stretches across the entire dashboard, a 56-inch LCD that it calls the Hyperscreen. This length of liquid crystal actually consists of three separate screens, a large one in front of the driver, a giant one in the center, and a smaller one in front of the passenger.

Four more screens are available: a head-up display that projects information onto the windshield in front of the driver; one for each of the rear seat passengers, mounted to the back of the front seats; and a removable, tablet-shaped one in the console between the rear seats. Every occupant can search, play, listen to, and watch their own content, as regulations allow. And information — like music and destinations — can be readily shared from one screen to another.

Controlling all of this technology is an onboard digital assistant called MBUX, which can be summoned, Alexa-like, by saying “Hey, Mercedes.” The assistant can then be asked, in natural language, to find and navigate to destinations, to play a song from a music streaming service, to adjust the four-zone interior temperature, or even to make adjustments to one of the four seats. Microphones around the cabin allow MBUX to locate an individual occupant, so all they need to say is “Hey, Mercedes. Turn on my seat massager,” and it will find and activate it for the proper position.

MBUX can also provide directions to the nearest fast-charging station, though the Mercedes brass may be surprised or chagrined that the one it recommended for us was at BMW’s North American Headquarters in Northern New Jersey.

Most importantly, the cabin looks like a properly opulent S-Class, with soft leather, deep carpeting, polished wood and jewelry-like pierced metal trim, all of it ringed by threads of infinitely adjustable colored lighting. The EQS’s body is also packed with insulation to enhance the luxurious quietude inherent in electric propulsion. Though for those who fear the silence, synthetic noises can be piped in under acceleration. Be warned that they sound like a turkey impersonating a Theremin.

With 516 horsepower being routed to all four wheels, the top-of-the-line EQS 580+ 4MATIC I drove was capable of rocketing from 0 to 60 miles an hour in just over 4 seconds. (The lower-test EQS 450+ will achieve this speed in 5.5 seconds.) The instant-on nature of the thrust was excellent for passing on New York’s teeming highways, and the handling was secure enough to allow a last-minute maneuver past six lanes of expletive-spewing drivers when I realized — despite the head-up display’s bright blue augmented reality navigation arrows broadcast on the roadway in front of me — that I was about to miss my exit to the Garden State Parkway.

When it arrives in dealerships this summer, with an estimated starting price under $100,000, the EQS will be the spearhead for a rollout of EQ vehicles over the next 12 to 18 months, including an EQE midsize sedan, an EQE and EQS mid- and full-size S.U.V., and an EQB compact S.U.V.

Smaller start-ups like Lucid and Byton are aiming to enter the market, and other luxury automakers like Bentley, Jaguar, Land Rover, Cadillac, Audi and Volvo are promising scores of coming E.V.s — while much of the industry pledges to shift their fleets entirely to electric power in the next decade. Are we finally at the electric inflection point?

“I always get painted as the skeptic simply by saying, ‘it’s too soon to tell,’” Ms. Sexton said. “Ten years ago we saw really decent sales of the Nissan Leaf and the Chevy Volt and we kind of thought the legacy automakers were getting serious about electrification. But 10 years later we’re still asking ourselves these questions.”

For Ms. Sexton, the answer is simple. “The E.V. pie will get bigger when more automakers actually put electric-powered product out in volume,” she said.