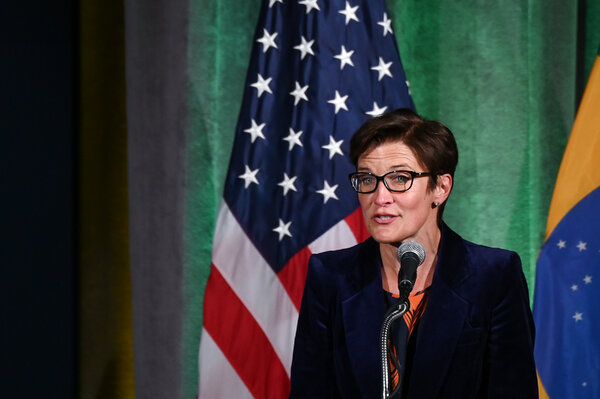 What big banks reveal about the economy

America’s biggest banks have all now released their financial results for the past year, data that reflect the strange economic situation facing President Biden and his new administration. Parts of the economy are booming, others are at a standstill and the outlook is extraordinarily uncertain.

It’s a different story for Main Street. Other banks with big consumer-lending arms didn’t fare as well, with Bank of America, Citigroup and Wells Fargo lagging in terms of profit growth. The low interest rates that prompted companies to raise debt have hurt banks’ net interest income on consumer loans, which fell year-on-year for most lenders in their latest results.

It could be worse. In the fourth quarter, JPMorgan released nearly $3 billion worth of reserves that it had built up to guard against loan defaults, while Bank of America, Citigroup and Wells Fargo released a combined $2 billion in the same period. Over the course of the full year, those four banks still added around $50 billion to their provisions against credit losses, a sign that they remain on guard against a potential wave of defaults. In the meantime, loan demand is low and deposits are piling up.

What to do with all that cash? “We have so much capital, we cannot use it,” Jamie Dimon of JPMorgan quipped to investors. The bank’s cash pile has doubled over the past year, to more than $500 billion. It’s a similar story at other banks, and now that they’ve been cleared by regulators to resume share buybacks, “we’re going to be aggressively buying back, and consistently,” said James Gorman, Morgan Stanley’s C.E.O. Analysts polled by FactSet expect the six largest banks to buy back nearly $70 billion in shares this year, up from $18 billion last year.

Cautious optimism. Although few bank bosses appear to think that Wall Street-focused businesses will perform as well this year, worries about Main Street units seem less acute than last year. Taken together, you get what Jane Fraser, Citi’s incoming C.E.O., told investors on an earnings call: “While we hope the end is in sight, this virus has surprised us and taught us the folly of best-laid plans, so we will remain vigilant and adaptable.”

A grim pandemic anniversary. One year ago, the C.D.C. confirmed the first Covid-19 case in the U.S., the beginning of an outbreak that has led to more than 400,000 deaths in the country.

A prominent investor warns of “vanished” risk. Baupost’s Seth Klarman, whose letters to clients are widely read around Wall Street, criticized Fed policies like persistently low interest rates, arguing that they mask the true health of the U.S. economy. “As with frogs in water that is slowly being heated to a boil, investors are being conditioned not to recognize the danger,” he wrote.

Trump’s family business is battered. The Trump Organization’s revenue fell nearly 38 percent last year, dragged down by signature properties like the Doral golf club in Florida and the Trump International Hotel in Washington.

Kelly Loeffler’s Atlanta Dream is near a sale. The W.N.B.A. team, which counts the former Republican senator as a co-owner, is poised for new ownership, the league said in a statement. Players on the team have objected to Ms. Loeffler’s ownership amid criticism of her stance on Black Lives Matter and other positions she took as an outspoken ally of Mr. Trump.

Winners and losers of inauguration fashion. American designers were represented by the key figures at the inauguration, often a revenue-boosting showcase for brands. Ralph Lauren dressed President Biden and Doug Emhoff, the husband of Vice President Kamala Harris. (Notably absent was Brooks Brothers, the now-bankrupt clothier that has dressed many presidents.) Ms. Harris wore clothes from Christopher John Rogers, Sergio Hudson and Pyer Moss, while Dr. Jill Biden wore an outfit by Markarian.

Biden wastes no time on his first day

President Biden and Vice President Kamala Harris were sworn in just before noon, and within hours of the barrier-breaking occasion Washington had changed. Democrats officially took control of the Senate and Mr. Biden issued executive orders “with an urgency not seen from any other modern president,” The Times’s Michael Shear writes. (Here are the stats to prove it.)

The pandemic, immigration, climate change and the economy were the focus of the orders, memorandums and proclamations signed in the Oval Office yesterday afternoon, rapidly reversing many of his predecessor’s policies. Among other things, Mr. Biden named an official Covid-19 response coordinator, shielded “Dreamers” from deportation, revoked the permit for the Keystone XL pipeline and rejoined the Paris climate accord.

Sundar Pichai, the Alphabet C.E.O., applauded the “quick action on Covid relief, the Paris Climate Accord, and immigration reform,” adding that “Google has supported action on these important issues.”

Bill Gates championed the “great first step” of rejoining the Paris accord so the U.S. can “lead the world in avoiding a climate disaster.”

Jay Timmons of the National Association of Manufacturers criticized the lost pipeline permit, saying that it would have created 10,000 union jobs. Marty Durbin of the Chamber of Commerce also opposed the move, calling it “a politically motivated decision that is not grounded in science.”

Wall Street seemed pleased. Driven by expectations of a hefty economic stimulus, the S&P 500, Dow and Nasdaq all ended in record territory.

When the focus shifts from executive orders to legislation, namely a huge stimulus bill, “it is going to take more than Mr. Biden’s trademark backslapping and good nature to break through the persistent gridlock in Congress,” The Times’s Carl Hulse writes.

Last month we published a special report, “How to Fix America,” in which we asked experts what they would do to address the most pressing problems in the U.S. It clearly struck a chord, because our inbox has been flooded with your ideas ever since. At the start of a new administration, here are some readers’ suggestions, edited for clarity and length:

“Require one full year of community service before the age of 25. Let’s give young people the opportunity to build community while serving others.” — Andrew David in Sherman Oaks, Calif.

“Redefine the federal poverty guidelines so that benefits remain high and people have more usable income, not less, when they get a raise or increase their hours.” — Jan Hise in Indianapolis

“If each political candidate were given an equal amount of public funds, the one who ran the best race would win.” — Sandie Onorato in Kirtland, Ohio

“Term limits for Congress.” — Roy Beamer in Durham, N.C. (and many others)

“The Federal Reserve could adjust the risk-weighted asset calculations of carbon assets for banks, say by setting the weight on a loan to a solar farm at 80 percent, and that for a tar sands project at 120 percent.” — Noah Pirani in Providence, R.I.

About Amazon’s vaccine ‘offer’ to the White House

On President Biden’s first day in office, the head of Amazon’s consumer business, Dave Clark, sent a letter to the White House with an offer to help achieve the goal of vaccinating 100 million people in the administration’s first 100 days. By way of assistance, the retailer offered to vaccinate a large share of its workers.

The e-commerce giant has made similar offers to state governments, including Tennessee and Washington. The earlier letters to governors were signed by Brian Huseman, who runs Amazon’s U.S. lobbying team, which has been seeking permission from the C.D.C. to vaccinate “essential” workers at the company’s warehouses, data centers and Whole Foods “at the earliest appropriate time.” The company has hired a health care provider to help administer the vaccine to employees, it said in the letters.

In Washington, Amazon was not among the companies Gov. Jay Inslee announced as partners in its vaccination plan this week.

This suggests that public-private partnerships to distribute vaccines may come with perks for the companies taking part, allowing workers to get vaccinated outside the age, health and job-based priorities set by states. Several states are struggling to roll out vaccines as fast as they’d like because of issues with funding, staffing and logistics. In his letter to Mr. Biden, Mr. Clark said that Amazon could help with “operations, information technology and communications capabilities,” though he didn’t specify what that would entail.

The online luxury retailer Mytheresa went public at a $2.2 billion valuation, a windfall for creditors of its former owner, Neiman Marcus. (FT)

In SPAC news: Dennis Muilenburg, Boeing’s former C.E.O., reportedly plans to create a blank-check fund, while the payments start-up Payoneer is in talks to go public by merging with a SPAC. (Bloomberg)

Jay-Z has launched a $10 million fund to invest in minority-owned cannabis businesses. (WSJ)

More companies have halted donations to the Republican Attorneys General Association after its fund-raising arm urged supporters to march on the Capitol before the Jan. 6 riot. (Documented)

President Biden is reportedly set to name Michael Barr, a former Treasury Department official, as the comptroller of the currency. (WSJ)

BlackRock indicated in regulatory filings that it may begin offering investments in Bitcoin futures. (Decrypt)

The battle of activist investment funds over … their use of the word engine in their names. (Bloomberg)

A Deutsche Bank board member is under fire for suggesting that Wirecard’s C.E.O. “finish” The Financial Times for publishing investigations into the embattled fintech company. (Bloomberg)

Senator Bernie Sanders made an unexpected sartorial splash at the inauguration, with handmade mittens and a cozy coat that launched a thousand memes. (NYT)