LOS ANGELES — In explaining why WarnerMedia had decided to release the much-anticipated big-budget “Wonder Woman 1984” simultaneously in theaters and on the streaming service HBO Max on Christmas Day, the company’s chief executive, Jason Kilar, invoked the classic Hollywood film “The Wizard of Oz.”

“We’re not in Kansas anymore,” Mr. Kilar said in a statement.

No longer, he said, would a film’s success be judged solely by the box office revenue it generates in theaters. Instead, it would be measured partly by the number of HBO Max subscribers it is able to attract. And just like Dorothy entering the Technicolor world of Oz, Hollywood feels as if it is stepping into a new era — one with streaming at the center.

The end-of-the-year holiday season usually means that theaters are packed with blockbuster crowd pleasers, award hopefuls — and moviegoers. Not this year. With many theaters shut because of the coronavirus and the ones that are open struggling to attract audiences, many studios have either pushed the release dates of major films into 2021 or created a hybrid model in which the theaters still in operation can show new releases while they are also made available through streaming or on-demand services.

“Wonder Woman 1984” is the most prominent example so far to be released using the hybrid model. But when it appears on HBO Max on Christmas Day, it will join Pixar’s animated “Soul,” and DreamWorks Animation’s “The Croods: A New Age” as marquee, holiday-season films that were expected to be box office favorites but are now likely to be primarily seen in people’s living rooms. 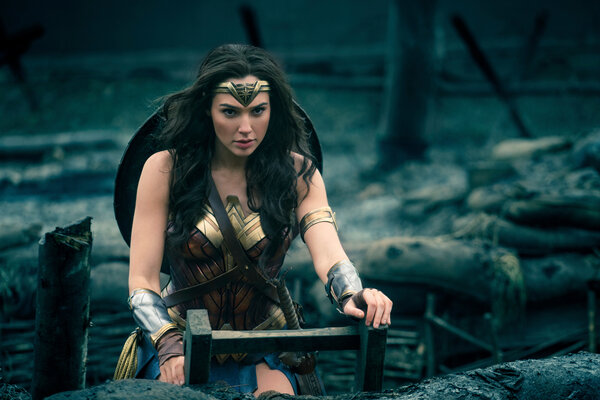 For companies that have their own streaming platforms, like WarnerMedia and Disney, releasing movies this way is now seen as an opportunity to drive subscriptions. Both companies have said that the moves will only last through the pandemic, but they also both recently shuffled their executive responsibilities to make it clear that streaming is the new priority. (Disney, for example, now has a central division that decides how its content is distributed, a change in strategy that puts Disney+ at the top of the studio’s priorities.) And audiences may not want studios to go back to the old way of releasing films that gave theaters 90 days of exclusive rights.

“There will be a new normal,” said Jason Squire, editor of “The Movie Business Book” and a professor at the University of Southern California’s School of Cinematic Arts. “Over the years, there has been a lot of tension between theatrical exhibition and studio distribution but not a lot of change. The pandemic has jump-started the change.”

It wasn’t long ago that Hollywood viewed streaming as an unwelcome insurgency. Several years ago, when Netflix began to seriously compete for Oscars, traditionalists scoffed at the thought of bestowing prestigious awards on films that were only nominally released theatrically. (This year, bowing to pandemic reality, the motion picture academy announced that films could skip a theatrical release and be eligible for Oscar consideration.)

Still, studios have long wanted to shorten the exclusive window given to theaters. Theater chains aggressively lobbied against that, worried that people would be reluctant to buy tickets to a movie they could soon see at home.

The sanctity of the theatrical release was being zealously guarded even after the pandemic lockdowns began. In April, Universal Pictures had a successful video-on-demand release for “Trolls World Tour” and said it would make more movies available that way without an exclusive theatrical run. Adam Aron, the chief executive of AMC, the largest theater operator in the world, called the move “categorically unacceptable” and said his company would no longer book any Universal films.

By July, however, the two companies signed a multiyear deal whereby Universal movies would play in AMC theaters for a minimum of 17 days before becoming available in homes through premium video-on-demand, or P.V.O.D. in industry parlance. This past week, Universal signed similar deals with Cinemark, the third-largest theater chain in North America, and Cineplex, Canada’s top exhibitor, adding the provision that for movies opening to $50 million in ticket sales, the exclusive theatrical window will stretch to 31 days.

The shortened window means the studio can theoretically spend less on marketing than is typically required when theatrical and home video debuts are three months apart. And studios typically keep 80 percent of premium on-demand revenue, while ticket sales from theatrical releases are split roughly 50-50 between studios and theater companies.

“Our hope is that by putting P.V.O.D. into the marketplace, we are improving the economics for the studio and as a result of that there will be more films that will get released theatrically,” said Peter Levinsohn, vice chairman and chief distribution officer for Universal. “The whole goal here is to have more efficiencies in our marketing, keep the films more profitable and stop the films from being sold off” to subscription services like Netflix or Amazon.

Warner Bros. chose to defend the tried-and-true theatrical model, hoping that Christopher Nolan’s “Tenet” would draw people back to theaters this summer after the first wave of the virus passed and 68 percent of American theaters were able to reopen. But with theaters still closed in the two largest markets, New York and Los Angeles, the film only grossed $56 million in its entire U.S. run. That was a far cry from Mr. Nolan’s previous theatrical achievements, like “Interstellar,” which earned $188 million domestically, and a stark warning to other distributors that the traditional way of releasing films was not going to work in 2020.

Today, the theatrical climate is more grim. Half of the theaters in the United States are closed and virus cases are rising around the country. Regal Cinemas, the second-largest chain in the U.S., has closed all of its theaters, citing a lack of films and audience. If there is not a federal grant program available to theaters soon, John Fithian, chief executive of the theaters’ national trade association, said he expects 70 percent of them will either close permanently or file for bankruptcy by early next year.

Big-budget spectacles have kept audiences flocking to movie theaters even through waves of home entertainment competition, from VCRs to streaming. That’s benefited both theater chains and studios, and it’s why few expect movies of the size of “Wonder Woman 1984” to be going directly to streaming post-pandemic.

A move away from theaters would affect what kinds of films are made. In short, if there is less box office money to be collected — because of a reduction in the number of movie theaters or a permanent shift in consumer behavior — studios would be forced to make fewer big-budget films. For those who believe Hollywood has become too reliant on lumbering superhero movies, that may actually be welcome news. The thousands of people each of those films employ would undoubtedly have a different perspective.

But others are not sure the change will be so drastic, pointing to the power of the theatrical experience.

Charles Roven, a producer for “Wonder Woman 1984,” said in an interview that he was confident that its release was not a sign of a new long-term strategy. “There is no question they want to make HBO Max successful and they should,” he said of Warner Bros. “But to say that this particular thing is what’s going to happen in the future, that would be taking a leap.”

Disney chose to bypass U.S. theaters altogether and release the $200 million “Mulan” on Disney+ in September, charging subscribers $30 on top of their monthly fee to watch the live-action adaptation of the animated film. Sales were hurt by an outcry over a filming location in China, but Bob Chapek, Disney’s chief executive, told analysts earlier this month that he saw “enough very positive results before that controversy started to know that we’ve got something here in terms of the premier access strategy.” Disney is planning to send several more big-budget movies to Disney+.

For studios without their own streaming services, the calculus is a bit different. While many opted to postpone their theatrical releases until 2021, others sold off films as a way to recoup some cash. Paramount offloaded “The Trial of the Chicago 7” to Netflix and “Coming to America 2” to Amazon, for example. In a twist, Netflix is currently one of the few studios still sending product to the struggling chains. From now to the end of the year, Netflix will give eight of its films limited theatrical runs before they appear on the service, including potential Oscar contenders like “Ma Rainey’s Black Bottom” and David Fincher’s “Mank.”

Universal is the other big studio still supplying films to theaters, buoyed by its new P.V.O.D. deals with theaters that allow it to distribute both larger movies like the “Croods” sequel and smaller films from its indie subsidiary, Focus Features.

Ms. Bagby Ford said that before the pandemic her company would not have accepted Warner’s plan to release “Wonder Woman 1984" in theaters and on HBO Max at the same time. Now though, any opportunity to show a film that could do some actual business would be a relief for a company that is staving off bankruptcy.

Mr. Kilar, WarnerMedia’s chief, said in his statement that the pandemic was the main reason to release “Wonder Woman 1984” in theaters and through streaming. But he also noted how the move put the control of how to watch the film firmly in the hands of the audience.

“A little over four million fans in the U.S. enjoyed the first ‘Wonder Woman’ movie on its opening day in 2017,” Mr. Kilar wrote. “Is it possible for that to happen again this Christmas with ‘Wonder Woman 1984’ between theaters and HBO Max? We are so excited to find out, doing everything in our power to provide the power of choice to fans.”

Should that work, it’s unlikely things will ever be the same.