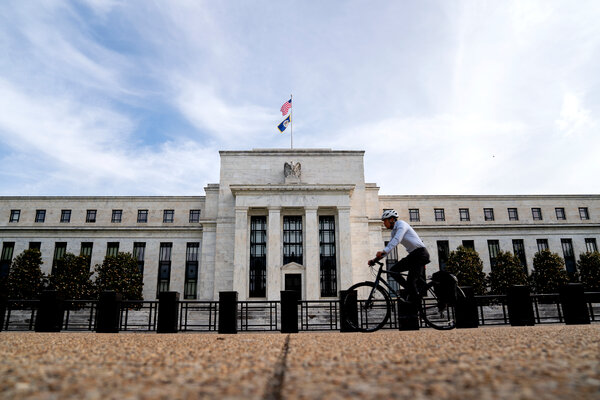 The Federal Reserve will release its June policy decision and newest economic projections at 2 p.m. on Wednesday, and investors will be scrutinizing its announcements for clues on whether the central bank’s thinking about inflation might be changing.

Price gains have been coming in quicker than central bankers had expected when they last released economic projections in March, and that has invited questions about whether and when the Fed will need to begin removing its economic policy supports, which remain set to emergency mode. Any tweaks to the Fed’s policy statement or estimates about the outlook will be closely watched.

Economists generally expect Jerome H. Powell, the Fed chair, to stick to the script when it comes to price increases: Predicting that inflation pressures will fade as the United States gets through a funky reopening period and noting that the central bank has the tools to deal with inflation if gains do last.

There are reasons to expect the bump to wane. Prices sank during lockdowns last year, making the year-over-year comparison look artificially big, and prices are rising now because demand is bouncing back faster than supply. Officials expect that the bottlenecks restricting the supply of items like cars and airline tickets will clear up as things return to normal.

But as climbing costs for consumers dominate headlines and political debates in Washington, Mr. Powell is likely to face questions about how much inflation the Fed is willing to tolerate before the situation is no longer seen as manageable and temporary.

Here are the inflation indicators the Fed is working with headed into its meeting:

Personal consumption expenditures, the Fed’s preferred gauge: up 3.6 percent in April from the prior year, the fastest pace in 13 years.

Core P.C.E., which strips out volatile food and energy prices: up 3.1 percent in April over the year, the fastest pace since 1992.

Consumer Price Index, an important Labor Department gauge: up 5 percent in May from a year earlier.

University of Michigan consumer inflation expectation for next year: moderated to 4 percent in preliminary June data, but still up from 3 percent at the start of the year.

University of Michigan consumer inflation expectation for five years from now: moderated to 2.8 percent in preliminary June data, little changed from 2.7 percent at the start of 2021.

Federal Reserve Bank of New York’s Survey of Consumer Expectations, inflation expectation for next year: 4 percent, up from 3 percent at the start of the year.

New York Fed Survey of Consumer Expectations, inflation expectation for three years from now: 3.6 percent, up from 3 percent at the start of the year.

The Fed targets 2 percent inflation on average, and officials had been hoping to coax inflation slightly higher so that price gains average their goal rate after years of weakness. Officials have also aspired to lift inflation expectations, which had been drifting too low. As a result, the recent moves higher might be received as good news.

The key question is how long stronger price pressures will last — and at what point they will have overstayed their welcome.