In notes from their September meeting, Federal Reserve officials said optimism about a strong rebound hinged on government help. 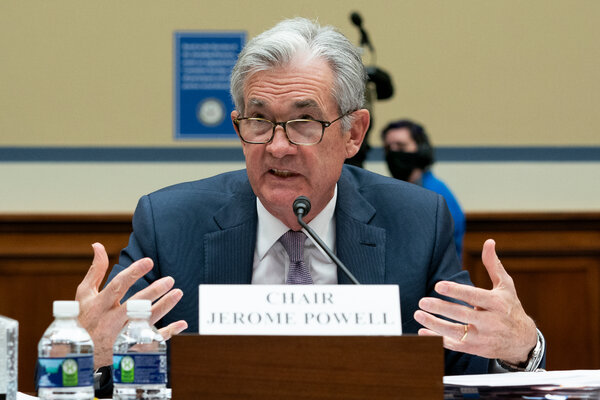 WASHINGTON — Federal Reserve officials were counting on Congress and the White House to pass additional aid for households and businesses hit by the pandemic as they laid out an optimistic forecast for the economic recovery last month. Now, that outlook is in jeopardy.

In September, the Fed revised its economic forecasts to reflect a much rosier scenario than officials had penciled in earlier in the pandemic recession: Unemployment was seen dipping to 7.6 percent by the end of the year, down from a forecast of 9.3 percent in June. Growth was seen recovering by more, after plummeting early in the year.

But Fed officials “noted that their economic outlook assumed additional fiscal support and that if future fiscal support was significantly smaller or arrived significantly later than they expected, the pace of the recovery could be slower than anticipated,” according to minutes from the Sept. 15-16 meeting, which were released on Wednesday.

The Fed’s staff, likewise, “assumed the enactment of some additional fiscal policy support this year” without which “the pace of the economic recovery would likely be slower.”

Now, the bet that more public money is right around the corner is crumbling. President Trump pulled the plug on stimulus negotiations on Tuesday, before suggesting later in the evening that he would approve stand-alone bills.

Risks to the economic outlook that the Fed fretted over in September seem to be growing more prominent by the day.

Last month, Fed officials said they “remained concerned about the possibility of additional virus outbreaks,” noting they “could result in increases in bankruptcies and defaults, put stress on the financial system, and lead to disruptions in the flow of credit to households and businesses.”