Taking a cue from its Swedish colleagues at Volvo and the pragmatic views of automotive product planners worldwide, General Motors roiled the international automobile industry last week by proclaiming that all its cars will go pure electric by 2035.

The pronouncement is likely to apply more pressure on more automakers, both in the United States and abroad, to beef up their electric efforts, and on the fossil fuel industry to find alternatives to its oil and gasoline products.

The ripples also reach the parts makers, designers and garages that must adjust to the coming electric future, all the way down to the tires.

The popular script on electric vehicles maintains that they cost more, pollute less and run so quiet that they must have speakers to signal their approach. But compared with gasoline or diesel-powered cars and trucks, E.V.s also require special or seriously modified components, and out-of-the-ordinary mechanical and physical attention (or inattention, as we’ll see below).

While the transition to electric is a learning process for drivers, it is, more to the point, the same for all segments of the automotive industry.

“When manufacturers come to build a dedicated electric vehicle, there’s a lot of things to change,” said Ian Coke, chief technical officer in the United States for Pirelli Tire. “But first, you’ve got to make the distinction between vehicles that are being electrified — installing an electric powertrain into an existing platform — and electric vehicles.” For the latter, he said, “there’s a lot of carry-over components that aren’t ideal.”

The most familiar example is Tesla, which designs its cars to run as pure electrics. Other companies already following in Tesla’s tire tracks include Lucid, Volkswagen, the Chinese-based NIO and Volvo, which said in 2017 that at least half its global production volume would be electric as soon as 2025 and released its first all-electric vehicle, the Recharge XC40 compact utility, last year. G.M., of course, is on board, as is Ford Motor, which has made a major investment with the electric truck maker Rivian, and whose Mustang Mach-E is among the most anticipated non-Tesla electrics yet. 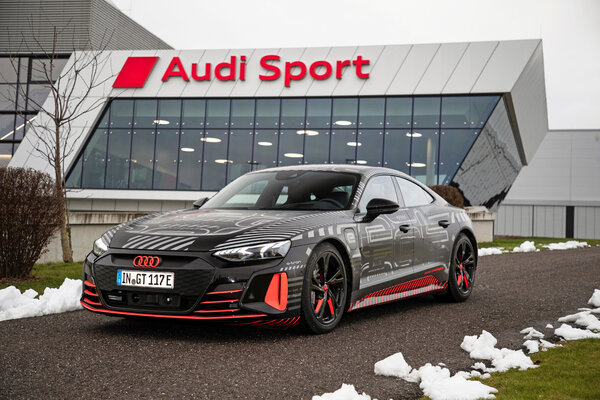 Audi, which markets a variety of electrified S.U.V.s like the E-tron, is developing other designs as pure electrics, said an Audi of America spokesman, Mark Dahncke. The challenges, he said, are formidable: “You have to realize that everything on the car you now take for granted — wheels, brakes, tires — you have to optimize for efficiency.”

There are other issues as well. “You have a juxtaposed target: On the one hand you have to manage and withstand the weight of a battery-powered car with stronger brakes, stronger axles, strong suspension,” Mr. Dahncke added. “At the same time, you need to optimize everything for aerodynamics.”

These “ground up” procedures involve collaboration between suppliers and manufacturers, Mr. Coke said. They must consider the brakes, the wheels, the side mirrors, wind noise, chassis noise, tire noise. The issues are not unique to one manufacturer; in his case, Pirelli, whose home base is Milan, has been working closely with Rivian, which is based in Michigan, to fit tires to its products.

Tires, of course, are Mr. Coke’s singular concern. And among his priorities in developing for E.V.s is reducing a tire’s rolling resistance, a key factor in extending battery life. Longer battery life means less range anxiety, and a bigger potential market for electric cars.

“Our compounds are designed with a high content of silica to deliver very low resistance,” Mr. Coke said. Silica decreases the tire’s energy consumption. “And our challenge is to balance that with handling, braking wet and dry, and tire life. And in an E.V., we try to tailor the tires to the application: if the vehicle is front-, rear- or all-wheel drive; if the use is for summer, winter or all-season.”

Then there’s torque. “There’s immense torque in E.V.s,” Mr. Coke said. “The tendency to put your foot down and deliver that power is obviously a tendency that wears out tires very quickly. So you need to have grip, but you don’t want too much resistance.” And around and around.

While weight reduction is important to all cars and trucks, it’s especially crucial with E.V.s, mainly because of the battery load. And because the batteries often are set low in the vehicle, the center of gravity in electrics is different from that in a conventionally powered car. Is this change of sensation disconcerting for some drivers?

Not for most people, said Mr. Dahncke of Audi. “Added weight lower in the car impacts your feeling of confidence, because it feels more planted,” he said. “The car is heavy, but where that weight is makes a difference, and you feel it as a driver.” The E-tron S.U.V., for example, weighs about 5,800 pounds.

What might require some adaptation is throttle response — as Mr. Coke noted, acceleration from the electric motor is immediate and strong when one steps on the gas, er, accelerator — as well as the sound of the car, or lack of it.

For enthusiasts who relish backfire burps and a roaring exhaust — well, get over them. How about listening to the theme from “Driving Miss Daisy”?

Hans Zimmer, who composed the gentle score for that film, was commissioned last year to write an “automotive soundtrack” for one of BMW’s coming electrics, the i4. Mercedes-Benz, Jaguar, Nissan and others are working on similar projects.

“The electric vehicle sound is its identity,” Frank Welsch, responsible for technical development at Volkswagen, told Reuters in 2019. “It cannot be too intrusive or annoying.”

The coming Audi E-tron GT, for example, has control units that remix the sound effects based on the car’s speed or the position of the accelerator pedal. Also fitted to the Audi is an AVAS — an acoustic vehicle alerting system, required to alert pedestrians that an electric car is close by.

Yet another shift is playing out in the migration to E.V.s: the prospective demise of the independent neighborhood auto mechanic. Electric vehicles don’t require oil changes, new spark plugs, fuel filters, replacement fluids and much of the routine maintenance that keeps the nation’s estimated auto repair work force of 750,000 people in business.

“You’re going to see a shift in types of services from those shops,” said Jeffrey Cox, president of the Automotive Maintenance and Repair Association in Chicago. “But we’ve already seen changes: We’ve seen oil change intervals go up. So I don’t see E.V.s as the death of the aftermarket. The biggest challenge is the recruitment of technicians with specific skill sets.”

He continued: “It will be less about ‘Oh, I love to take things apart and put them back together.’ It’ll be more about your understanding of code and computer systems.”