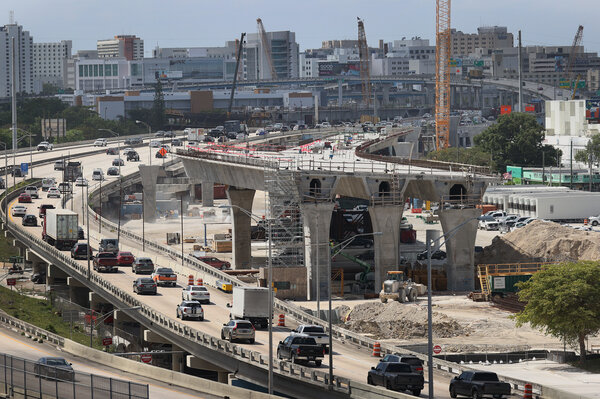 By Gillian Friedman and Lauren Hirsch

Business groups and large corporations reacted negatively on Wednesday to President Biden’s expected proposal to fund his $2 trillion package of infrastructure spending with a substantial increase in corporate taxes.

The scale of the infrastructure program — the details of which Mr. Biden is expected to unveil later on Wednesday — is so big that is that it would require 15 years of higher taxes on corporations to pay for eight years of spending. The plans include raising the corporate tax rate to 28 percent from 21 percent. The corporate tax rate had been cut from 35 percent under former President Donald J. Trump.

The Business Roundtable said it supported infrastructure investment, calling it “essential to economic growth” and important “to ensure a rapid economic recovery” — but rejected corporate tax increases as a way to pay for it.

“Policymakers should avoid creating new barriers to job creation and economic growth, particularly during the recovery,” the group’s chief executive, Joshua Bolten, said in a statement.

The U.S. Chamber of Commerce echoed that view. “We strongly oppose the general tax increases proposed by the administration, which will slow the economic recovery and make the U.S. less competitive globally — the exact opposite of the goals of the infrastructure plan,” the chamber’s chief policy officer, Neil Bradley, said in a statement.

The president’s focus on the work force will help the economy as it recovers from the pandemic-induced slowdown, the National Association of Manufacturers, a trade group, said in a statement. But, it added, the proposed tax increase would hurt the country’s competitive advantage.

“Raising taxes on manufacturers would fundamentally undermine our ability to lead this recovery,” the trade group said.

Wall Street has been wary of possible tax increases since the presidential election and has hoped that gridlock in Washington would moderate Mr. Biden’s agenda. On Wednesday, a spokesman for JPMorgan Chase said the bank’s chief executive, Jamie Dimon, believed “that the corporate tax rate for companies in the U.S. has to be competitive globally, which it is now.”

But “he has no problem with high-income people like himself paying a higher tax rate,” said the spokesman, Joseph Evangelisti.

The Biden administration has indicated that tax increases for wealthy Americans will help fund the second phase of the infrastructure plan, which is expected to be announced next month and will focus on priorities like education, health care and paid leave. The increase in corporate taxes is an effort to “ensure that corporations pay their fair share,” White House officials said in a news release.