BT Group’s top executives have offered to waive their cash bonuses for the next two years as it seeks to appease investors in the wake of the decision to suspend one of the most reliable dividends in corporate Britain.

Sky News has learnt that BT wrote to leading investors this week to inform them that Philip Jansen, chief executive, and finance chief Simon Lowth would defer £2.2m in combined bonus payments for the next three years.

In addition, Nick Rose, the non-executive director who chairs BT’s remuneration committee, said the pair had “also agreed to defer their full annual bonus for the 2020/21 financial year into shares for a further three years, to the extent that any annual bonus is payable”.

“This means that the executive directors will not receive any cash bonuses for two consecutive years,” Mr Rose wrote in the letter, a copy of which has been seen by Sky News.

The decision to defer the bonuses comes in addition to Mr Jansen’s decision, announced in March, to donate his salary for six months to health charities and small businesses. 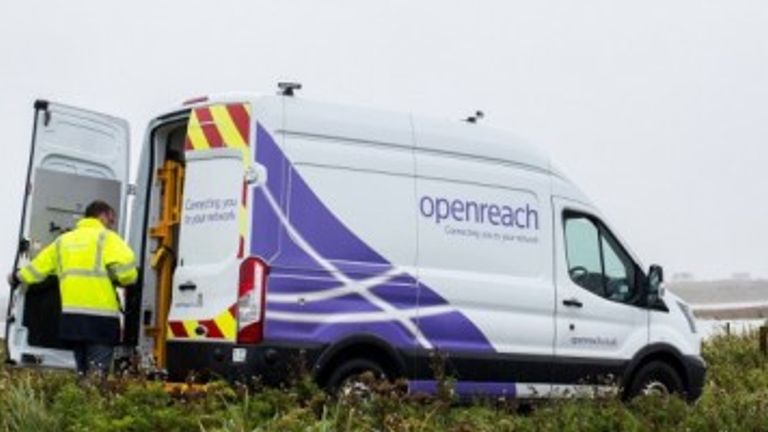 Last week’s confirmation that BT was suspending its dividend for the first time in 36 years was not unexpected, but nevertheless shook investors who have seen a string of companies axe or reduce their payouts because of the coronavirus pandemic.

BT’s decision not to pay a final dividend for last year, or at all in the current financial year, will save it roughly £2.5bn – and has been motivated by the need to fund the rollout of full-fibre broadband to tens of millions of homes.

That multibillion pound investment plan – described as “the biggest fibre investment programme in a generation” – is designed to connect 20 million homes by the mid-to-late part of this decade, and is seen as a critical enabler of Britain’s future economic growth.

While the FTSE-100 telecoms group has not furloughed any of its employees using the government’s emergency wage subsidy scheme, and has said that it will award bonuses to all frontline staff, its dividend decision was a deeply sensitive one for its board.

Jan du Plessis, the company’s chairman, described it as “exceptionally difficult” but “in the best long-term interests of shareholders”.

In his letter to top investors, Mr Rose also addressed a new restricted stock plan on which BT has been consulting with investors for several months.

This would provide a greater certainty of paying out to participants, including Mr Jansen, but would be at a substantial discount to the previous incentive plan.

If approved by shareholders, the usual award will be 200% of salary – half the annual grant under the old scheme.

However, BT has decided to reduce that further, on account of its “share price performance prior to the COVID-19 crisis and the dividend decision”.

Mr Rose said the remuneration committee would make a final decision on the first restricted stock award closer to its August grant date, but said it would be no higher than 175% of salary for Mr Jansen and Mr Lowth.

He added that the committee would “assess whether any ‘windfall gains’ have been realised as a result of any COVID-19 ‘bounce-back'”, reflecting concern among City investors that bosses stand to reap huge sums in several years if their companies’ value soars in the aftermath of the coronavirus crisis.

Overall, Mr Jansen’s future maximum pay packet will be slashed by roughly one-third to about £5.5m.

Part of the reduction will stem from a reduction in his pension allowance from 15% of his £1.1m salary to 10%, bringing him in line with the average BT employee.

That follows a high-profile campaign led by the Investment Association (IA) to force listed companies to bring bosses’ pension perks in line with their wider workforces.

Mr Jansen was recruited to BT in 2018 after a successful and lucrative stint at the helm of payments company Worldpay.

BT declined to comment on the letter, which is understood to have been sent ahead of the publication of its annual report later this week.

Last week, Mr Jansen topped up his shareholding in BT, and now owns more than £8m of stock – in excess of a new requirement that he holds at least five times his salary in BT shares.

His purchase of more shares was cited by company insiders as evidence that a Financial Times report of talks to sell a stake in Openreach, its broadband infrastructure arm, was inaccurate.

However, there is an expectation that some form of transaction to crystallise Openreach’s value will take place in the coming years.

The shares have performed poorly over the last year, losing 45% of their value.

BT, which owns the EE mobile network, now has a market capitalisation of just £11bn.